Lawyer John Mansfield at the somewhat plain entrance to Church

Church is a relatively new bar on 26th and NE Sandy.  Opened in 2013, it has an intriguing interior to mitigate the nondescript exterior and lack of a really viable patio.  Willamette Week, in its review accurately states, “Though it is a neighborhood bar in no neighborhood at all, it’ll likely gather a congregation,” – affirmed on both of our visits – an energetic crowd to complement the friendly and knowledgeable staff.

Mansfield in a margarita toast to the 95 Theses

I was joined by one of Thebeerchaser regulars, Portland intellectual property lawyer, John Mansfield.  John thought he could cause a stir and gain some publicity by emulating his hero, 16th century theologian, Martin Luther, and tacking 95 patents to the door of Church to commemorate Luther’s posting of his 95 Theses at the door of All Saints’ Church in Wittenberg in 1517.

Indeed, besides the physical resemblance one can glean from these pictures, Mansfield and Luther share some other traits.  Luther translated the Bible to the vernacular and Mansfield converts the language of patents and IP procedures into coherent terms that his clients can understand.

The name provides a marketing challenge, of sorts….

A Google search for “Church“ yields 221 million possible hits and for “Church Bar,” a total of 490 million – an interesting fact in itself, but it raises the same question I asked the owner of the recently Beerchaser-reviewed (April 2013 post) bar “Beer.”  How do you market your establishment on-line and help people find it given the generic moniker?

Although there are also bars named “Church” in Webster England, Lakewood Ohio, Portland Maine and Atlanta, our research found that a new trend is also to have Sunday church services in a bar – possibly an answer to the statistical question above.  It’s the case in both Forth Worth and Abilene, Texas.  (Of course, if Rick Perry is your governor, it would motivate one to both drink and pray without ceasing…)

I like answer the Abilene pastor gave to the following question: Will alcohol be served at Bar Church?

Is it kosher to drink in Church???  Ask Sam, the bartender.

“Jesus seemed more interested in connecting with people than he was interested in debating questions like this.  We like Jesus’ approach.  The fact is that we meet in a bar, and some people are probably going to want to order a drink.”

One of the other pastors stated, “If Jesus came in the door, he’d probably laugh.”

The Décor – The dark recycled wood panels on the wall have inlays shaped like steeples and catch the light from very large windows at the front of the bar.

Medieval trappings integrated into the décor enhance the impact as does one of the other unique  items – a confessional booth which is actually a slick photo booth (see below).

Bartender, forgive me, for I have sinned. “It has been five minutes since my last Bloody Mary….”

Inside the confessional is a high-quality digital camera, which will take about 8 photos of the “penitents” and through a custom-made software program transmit them to social media for posting – pretty slick although not medieval and raising issues regarding the sanctity or confidentiality of this bar sacrament (to be resolved over cocktails…)

Catharsis in the booth….

The Food – The menu at Church is impressive with enough Southern standards to make one feel like he’s at a Baptist convention.  Although we did not eat, we met Javier, the chef, and he is proud of the selection and the quality and he was knowledgeable about his craft.

For example, hush puppies, glazed pork belly and corn bread, biscuits and gravy, grits and even their tofu dish has black-eyed peas.  They reportedly have a great burger and their ribs are only $5 during Happy Hour.

Also a selection of oysters and as stated in the Portland Tribune review in June 2013, “A sign over the bar reads, “Eat. Drink. Repent.” It’s a little unsettling, especially when you’re talking about shellfish — but we remained unrepentant.”

Mansfield with Brian Block, one of the owners and the traditional Beerchaser logo.

The Cocktails It’s an eclectic and creative cocktail menu which adds to a nice selection of nine wines and eight beers, although we were somewhat surprised,  that there were only two beers and a rotating cider on tap. (We had the Pfriem Blond IPA from the Hood River brewery – their rotating micro, which was very good.) John also had an excellent margarita.

An ambitious project would be to work one’s way through the ten interesting cocktails in addition to a “rotating punch.”  Most of the drinks are consistent with the religious theme:  For example, “The Great Fire” is tequila, lime, grapefruit, sugar, dill and cayenne, while “Sunday Morning” is buffalo trace, Drambuie, ginger syrup, lemon, Angostura and bubbles?.  “Death from Above” and “Old World Prayer” were also worthy of a future indulgence.

Some of the reviews questioned the synergy of the intriguing ingredients.  And the Portland Mercury in its review opined, “As if to make a position statement, the bar offers a Pickleback: a shot of pickle brine that washes away a shot of bad whiskey—an efficient tool for those only interested in one aspect of their drinking. It lives at the end of the cocktail menu, a white flag of capitulation after all that trying.”

The two visits to Church were both good experiences and the bar’s character and décor are worth seeing.  Since Mansfield was noted for the tribute to his historical hero above, it is fitting to quote one of Thebeerchaser’s favorite intellectuals  – Lord G.K. Chesterton, a British theologian, essayist, philosopher, newspaper columnist and novelist, who lived from 1874 to 1936 in London.  He was known for his love of food and drink and sometimes said grace before lighting a cigar.  He once stated: 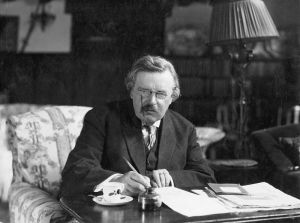 “No animal ever invented anything as bad as drunkenness – or as good as drink.”

Based on two more quotes, I think he would enjoy the crowd and the theme of Church:

“The Bible tells us to love our neighbors, and also to love our enemies; probably because they are generally the same people.”

“If there were no God, there would be no atheists.”

Stop in at Church (Happy Hour from 4 to 7 and midnight to 2 A.M. every day with $2-$4 drafts and $3 well drinks) and have a chicken gizzard salad washed down with an “Old World Prayer”cocktail (Monopolowa vodka, green chartreuse, pear juice, lemon, green tea syrup and juniper) and then receive absolution in the confessional.