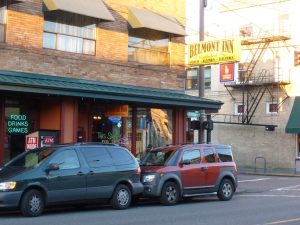 The Belmont Inn on Belmont Street!!

Draft Magazine recently named Belmont Station as one of the top 100 beer bars in America. While Thebeerchaser prides himself on his due diligence in scoping out and then visiting bars, this one got by him. Perhaps the slip up in confusing The Belmont Inn (sometimes the moniker Belmont’s Inn is also used) with the similarly named venue is understandable, however, because Belmont Station is actually on Stark Street.  Although the Belmont Inn is not in the top 100 bars, we still had good beer, reasonable food and another “shot” at Big Buck Hunter.

Poet and essayist, Walt Whitman said, “I have learned that to be with those I like is enough,”  and the companions on a Beerchaser visit can definitely affect the experience.  I was therefore fortunate to have David Dickson and Adam Davis join me in hoisting a mug.  Dickson has been featured in previous reviews including The Muddy Rudder Public House and Davis Street Tavern and can be considered a Beer Tour regular. 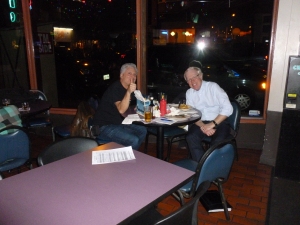 Davis is one of the founders of the NW’s premier polling and public opinion firm DHM (Davis Hibbitts and Midghall, Inc.).   Adam’s erudition and audacity are notable and starting out with a Vodka Tonic with a touch of Peach Schnapps was indicative of his eagerness to go off the beaten path.

After finishing his freshman year at Grant High School, Adam moved to Estacada (home of The Rangers) where he served as student body president. He worked on the “Go-19” Campaign to lower the voting age and was one of the founders of the first high school chapter of OSPIRG.  Some suggest his political instincts were shaped in downtown Estacada at The Legendary Safari Club which in those days was not strict in checking OLCC cards.

After attending Willamette University for one year he transferred to Portland State, where he graduated.  While at PSU, he also served as then State Representative and now Congressman, Earl Blumenauer’s first administrative assistant.

Some suggest Thebeerchaser was a victim of the curse, “May your life be filled with lawyers,” and Adam reinforced that plague since he graduated from U of O Law School and then practiced for a year before starting his opinion polling work.  His current work involves a lot of interesting stuff and he needs to use a power point presentation to explain what he actually does for a living. 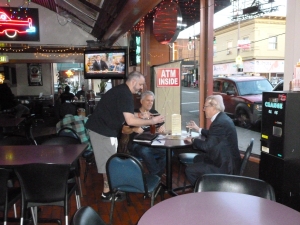 Willamette Week in its 2007 Drinkers’ Guide – A Sinful Guide to Portland’s Best Bars” described Belmont’s Inn: “There’s plenty of beer, the crowd is diverse and finding a seat is rarely a problem.”

There are very few other reviews of this bar and it can be described as a nice, but not distinctive, neighborhood tavern with a bunch of beer options (23 on tap in addition to PBR and Bud) and good, reasonably priced food.

David Dickson, being a Stanford grad and having spent most of his career in management at academic institutions, made an effort to impress Adam in our political discussion with the assertion, “In democracy, it’s your vote that counts while in feudalism, it’s your count that votes…..”  He started with a Double Mt Indian Red Ale from Hood River while I drank an excellent Spire Mountain Dark N Dry Cider (it was…) from Olympia. We collectively followed up with Portland’s Breakside Brewing Pilsner. 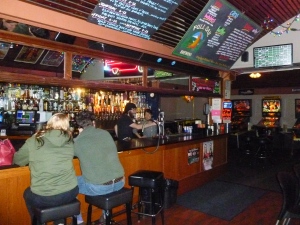 The Bar at the Belmont Inn

After appetizers, we all had good meals choosing from their excellent selection of 1/2 pound burgers.  They also have a robust selection of salads and sandwiches.

Since they don’t have a working web page, it’s a challenge to determine when the Happy Hour occurs, but it appears it’s from about 11:30 to 7:00 each weekday and more confined on weekends. They are open 365 days each year. 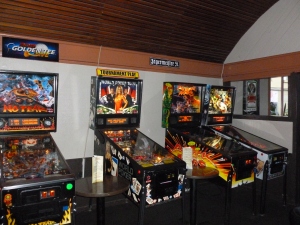 David, in his quest to become the world’s best fake marksman, gravitated towards this electronic big-game hunt, while Adam spewed memories of the “real” prey at the Safari Club in Estacada 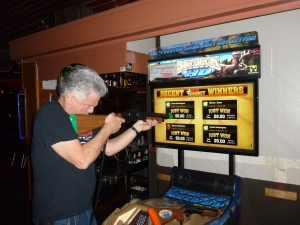 “If only I had spent more time shooting and less time studying in Palo Alto….”

Some of the reviews suggested the service was less than stellar, but we found Brett and Angie were friendly, helpful and efficient.  Although the Belmont Inn may not make not ever be considered one of the nation’s top bars, it has a diverse group of regulars, friendly staff and a memorable selection of beer.  And according to Adam, it is one of a limited number of establishments where one can get a good Peach Schnapps.