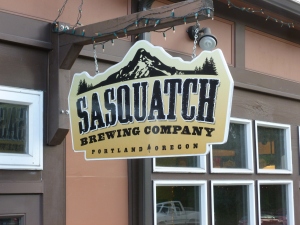 The Sasquatch – A Brewery and a Brew Pub

Note:  After two “Thebeerchaser Goes International” posts, we should return to a review of a Portland establishment before continuing the narrative of our European trip.

The Sasquatch Brewery and Pub in Hillsdale brought back memories from Thebeerchaser’s past – many years past – where for years a few blocks up from the Sasquatch site located on Capitol Highway, stood a wonderful bar named “No Dogs Allowed.”  In fact, it was about the same time that the group “Three Dog Night” was on the charts and appeared in a memorable campus gig at Oregon State.

Anyway, I joined my friend, David Kish, for some frosty mugs.  Sasquatch is in his neighborhood and where a former Italian restaurant became this quant pub which makes great beer and has good food – It’s worth a visit.

A quality addition to the Hillsdale Neighborhood

We talked to owner, Tom Sims, another OSU grad, who while in the paging business,  brewed beer in his garage as a hobby.  Like other Oregon micro-brew entrepreneurs, he pondered whether he could expand his hobby into a business.“Maybe I can build a small brewery.”

Built from the ground up with a lot of thought

He bought his first eight-barrel boil kettle on Craig’s list and poured over drawings of the historic building – once a Trolley Station on the Red Electric Line which carried commuters from Portland to Hillsboro and Forest Grove.

That was a little over two years ago and he now brews about 700 barrels annually.  The Sasquatch Website is outstanding. It’s includes photos and brief narratives chronicling their journey from designing the brewery to working on a “Good Neighbor Agreement” with surrounding residents and the hoops to get their liquor license. The values conveyed in their website and talking with the owner and staff on our visit, make me root for the future success of their enterprise: 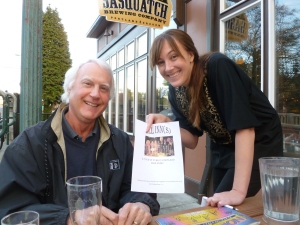 David Kish and our server. Friendly staff and good values….

“Sasquatch Brewery believes in strengthening our community by creating the opportunity for spontaneous meetings, serendipitous connections and celebrations…..We are a family-owned brew-pub that strives to support local and sustainable farmers….

Our beers are brewed on site from a seven-barrel system with the quality ingredients and care that Oregonians expect. We pride ourselves on being a friendly place for our neighbors to unwind and enjoy great food and great handcrafted beer with family and friends.”

Because I knew that Kish also had an interesting history, I quizzed this one-time beer-related entrepreneur and outstanding former Oregon public servant about his story.  I loved the tale about how he became known as “The Beerman” in the late 1960’s at the University of Massachusetts in Amherst when he and some buddies successfully franchised the distribution of beer to twenty of the twenty-two fraternities on campus.  (We both agreed that statutes of limitation for the eleven or so state and federal laws this arrangement possibly violated, have in all probability, tolled.) 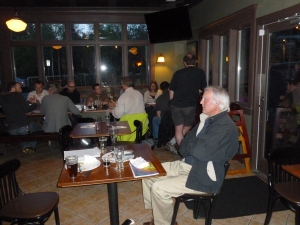 The “Beerman” was also a dedicated public employee and bar owner.

While it has become fashionable to demean public servants, I know from his personal work ethic and expertise, which I witnessed working with him at City Club of Portland, David Kish was a dedicated and very competent public manager.

Let’s look at a summary of his public service which started as an officer in the US Army. He worked on the Model Cities program and Portland urban renewal before becoming former City Counselor, Charles Jordan’s lead assistant in 1974.

He then owned and operated a Portland bar for six years (1976-82 – The Storm Cellar Tavern on Burnside which became a soccer bar – The Bitter End – closed last year, but rumored to be re-opening.)  A stint in the solar energy business with former Portland Planning Director, Ernie Bonner, and he then became the Director of Budget and Energy Management in the Oregon Dept. of Energy.

He was recruited back to the City as Portland’s Director of General Services and then Mayor Bud Clark’s (See July, 2012 Beerchaser post on the Goose Hollow Inn under “Historic Bars tab) Chief of Staff for two years before resuming his position in General Services until his retirement in 2000.  Thanks for your service, David!

From the selection of ten Sasquatch Brews and four rotating taps, David had their Oregon Session Ale, a pilsner, that he enjoyed, while I opted for the OR-7 Amber Ale which lived up to its billing: “Easy-drinking, malty and medium bodied with a rich amber hue….worthy of a second pint.”

They do not serve liquor, but also have a nice selection of wine and what manager, Alex, described as a “robust selection” of six hard ciders.  Neither one of us had the courage to imbibe, but our curiosity was piqued by the “Beer Float” (Hairy Knuckle Stout, vanilla ice cream and salted caramel sauce)

Family-type Ambiance and Family Faire on the menu.

The menu is diverse with kid plates, small platters and dinner servings with snacks, sandwiches and a variety of entrée’s and desserts.  We each had a Chicken Basil Sausage (marinated in the Amber Ale) with sauerkraut, which was excellent.

And in case you were wondering, the Abominable Snowman or Yeti was the term coined in 1921 by a newspaper reporter, Henry Newman, when he interviewed porters for a Mt. Everest expedition, when they discovered large human-type footprints of unknown origin.

The Poster is of Vastly Higher Quality than the Movie!

And the poster of the 1977 film “Sasquatch – The Legend of Big Foot,” in the Brewery provides evidence that the artwork was a lot better than the movie unless you are fans of the actors (George Lauris, Steve Boergadine and Jim Bradford), who perhaps went on to jobs in micro-brewing that were more notable than their film careers.  A review in the Internet Movie Data Base (IMDB) by The Film Geek is not exactly gushing……

“Unfortunately the script and acting are weak. The dialogue is forced and clunky and the characters are little more than stereotypes. The pacing is also very slow, little of note happens in the film until the last 10 minutes……Overall the film is an oddity, it veers from a leisurely nature trek, to weak animal-based comedy, to a tension-filled finale….”

Since I am harkening back – when did the Abominable Snowman become Sasquatch?  Was it the same politically correct people who felt that the beast should be gender neutral, and that it was unfair to the burly hirsute females who wandered through the NW wilderness, to assume that they were of the male gender?

And to further digress, perhaps, it’s the same people who are now obsessed with renaming high school mascots such as “Braves” and “Warriors” into more contemporary and refined mascot monikers such as the “Pummeling Pomegranates” or “The Fighting Arborvitae”  – but that’s another topic.

The bottom line is that you should pay a visit to The Sasquatch – you’ll be glad that you did.

9 thoughts on “Sasquatch Brewery – Anything but Abominable!”