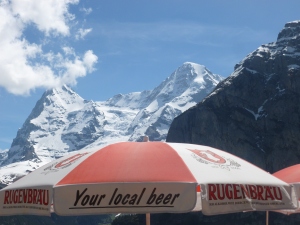 Looking out from the Schilthorn (mountain) in the Swiss Alps – Beer with attitude – er…I mean altitude!

After leaving Rome on our Rick Steves’ 21-day Best of Europe Tour, we spent three days in the Cinque Terra on the rugged Mediterranean coast of Italy – an extremely picturesque series of five villages or small towns i.e. Monterosso al Mare, Vernazza, Corniglia, Manarola, and Riomaggiore.  After two days on the coast, we headed for the Swiss Alps. 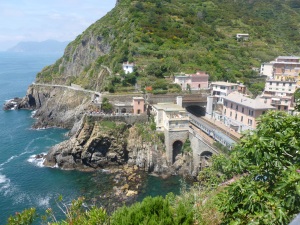 Beauty on the Mediterranean coast

A major part of the charm is that the villages are inaccessible by car – you can choose train, boat or just walk on the path connecting the villages.  And notwithstanding the many tourists, one experiences the charm of a true Italian village.

With the exception of one small bar we visited in Monterossa, most of the drinking establishments were attached to cafes’ but we had some great food at two locations – La Cantina Di Miky and Restaurant Belvidere. 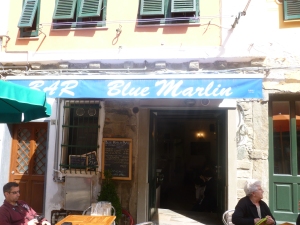 The Blue Marlin bar and restaurant in Vernazza

The trail between the villages – most notably Monterossa and Vernazza – was closed because of mudslides, but the train and boat made it easy to commute between each of the villages.

Composer, Guiseppe Verdi, once said, “You may have the universe if I may have Italy,” and all of us on the tour talked about returning to this part of Italy, but that was before we were exposed to the surreal beauty of the Swiss Alps.

The beach at Monterossa – a little warmer than the beaches in Oregon….

The highway to the Alps was stunning and it just kept getting better as we entered the Lauterbrunnen Valley and traveled to the village of Murren.

On our first day in the Alps we ascended the Schilthorn, by two separate tramways that took us to the top of the 9,744 foot mountain. It is one of the highest peaks in the Bernese Alps.

The James Bond movie, “On Her Majesty’s Secret Service”, was filmed at the top where there is a revolving restaurant – the Piz Gloria – and the James Bond Bar.

This was the only Bond movie in which Bond was played by George Lazenby and his enemy, Ernst Stavro Blofield, had his laboratory at the top of Schilthorn

Besides paragliding, one of the activities in the Lauterbrunnen is BASE jumping – one which almost requires a drink to discuss.

We walked down to Lauterrunnen’s Horner Pub, where we drank beer with BASE jumpers , some of whom were smoking majuijuana – fortunately after, rather than before, their jumps.  We also proved that beer can taste good even when there is a difference of 5,000 feet in altitude.

For the uninformed BASE jumping is an activity where participants leap from fixed objects and use a parachute to break their fall. “BASE” is an acronym that stands for four categories of fixed objects from which one can jump: buildings, antennas, spans (bridges), and earth (cliffs) – Wikipedia.  In the Alps, the relevant category is obviously “earth.”

Having worked in the legal profession for over thirty years, when researching the sport, I first noticed a “Third Party Liability Insurance Offer including Basejumping.”  And then the website entitled:

It had a list of 35 persons who had died in this region in BASE jumping accidents since 1994 – the last one was the week before we got there.  The following admonition helped put it in perspective:

The Horner Pub – Beer after the jump….

“Too many jumpers died in this valley!

Our group, while drinking beer at the outstanding Horner Pub complied with the “no littering” requirement……And the following quote from a BASE jumper interview, typifies the grit of those who love this activity as a hobby:

“Let me put my cigarette out before you interview me on camera. My mom knows I BASE but she doesn’t know I smoke.”

Hiking down to Lauterbrunnen and the Horner Pub

Our beers at the Horner Pub were a perfect ending to our two days in the Alps.  A Trip Advisor review from September 2012, aptly described this quaint pub in Lauterbrunnen:

The Horner Pub has some of the best meals in Lauterbrunnen…..This is a great place to unwind after hiking all day. Frequented by BASE jumpers, we met some very interesting people and learned a lot about the sport base jumping.”

A delightful pub in the Swiss Alps

The scenery was so spectacular and such a blessing it made me chuckle at the dilemma of the atheist who, struck by the spectacular beauty of his surroundings, wanted to express his profound gratitude, but didn’t know who to thank!

Fortunately, Thebeerchaser did know Who to thank and kept this in mind as we headed off to France for our last leg of our 21-day European journey. 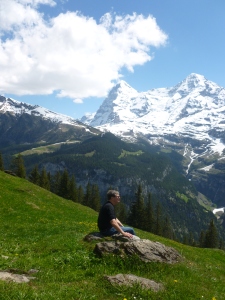 Profound gratitude for the natural beauty of the Swiss Alps

His house is in the village though…..from a church in Lauterbrunnen.