One of Portland’s Classic Dive Bars

The most recent Beerchaser posts have been on pubs and sights encountered on our Rick Steves’ 21-day Best of Europe Tour.  In light of a recent reading of famed British philosopher and author, Lord Chesterton‘s above quote, however, it was a vivid reminder that Portland’s bars, taverns and pubs are second to none in both the US and the globe! 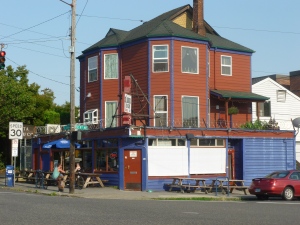 Oozing with character and history……

And The Slammer is a Portland classic.  As evidence,  Willamette Week publishes a “Best Bars” or “Drink Guide” supplement each year.  Thebeerchaser has kept printed copies of these going back to 2007 and they include 100 to 125 of the approximately 700 total Portland bars each year.  They are an invaluable resource for this blog.

Well, The Slammer (and Slab Town – visited already and to be reviewed next month..) appear to be two of the few, if not the only, establishments to make the list each of the last seven years.  Let’s look at a few excerpts:

“…The Slammer is maybe the friendliest bar in town ……It is a family-run dive bar of the old school, an after-softball hangout….and a place that will suffer fools but never assholes, one of the few places in town where widely disparate strangers talk to each other……It is a heartening place, and its very bad for your liver.”  (2013)

A great group of regulars and memorabilia from the ’70’s — that’s a Tonka Truck…….

“…the Slammer’s core clientele of square-jawed stalwarts with uncomplicated wardrobes (Eagles jackets shelved at the first flush of Slammer Softball jerseys…) that once typified the East Side Industrial District.”  (2012)

“Walk into the Slammer and be transported back into a reassuring hybrid of your uncle’s basement den and freshman-year college parties. Intimacy presides in this former speak-easy. A cigarette vending machine, pinball and Big Buck Hunter offer ample distraction…. Escape the no-man’s land of industrial Southeast Portland and be welcomed home to a strange, rowdy and delightful den of locals.” (2011)

I was fortunate to have my friend and Beerchaser regular – Portland attorney, John Mansfied, join me for the visit and he could have been a regular based on the way he commandeered the old Skee Ball machine – one of the few in Portland.

Beerchaser followers may remember John as the skilled intellectual property lawyer who has a propensity to interpret language literally.   For example, at the Mock Crest Tavern (May 2012 blog post), the menu stated, “Breakfast Served – Any Time.”  John asked for French toast from the Renaissance Era…..To see another one of his “literal” stories, see the end of this blog post.

“…..it’s safe to say the Slammer was pulled from somebody’s dive-bar fantasy and realized with a hasty affection. The bar has a cozy, funky atmosphere….filled with a mix of old regulars and neighborhood youngsters.”  (2010)

“….. but the Slammer is a corner bar so enchanting you may be moved to stand on an outdoor table and sing along to “Rocket Man” playing on the loudspeakers. After which the regulars will come outside and congratulate you.”  (2009)

Chris, the bartender, maintained the tradition of just about every one of the fifty-plus bartenders I have interviewed on Thebeerchaser tour of Portland bars and taverns – he was extremely friendly and helpful in giving us information about their bar.  He’s the son of the female owner.

The Slammer opened thirty-four years ago and Chris’s mom bought it eighteen years ago.  He thought that one of the distinguishing characteristics is the great mix of clientele – WW agrees with him.

“Plopped on the weird convergence of Southeast Stark Street, 8th Avenue and Sandy Boulevard, Slammer’s the kind of place that’s slightly different every time you go in…..one thing’s certain—the door on the bathroom is still nonexistent, and you’ll probably hug the bartender before leaving.”  (2008)

The sign says a lot about the character of this quirky establishment.

Based on our visit, Slammer was a great bar with friendly regulars and a solid and endearing character, but it has not always been this way.  In fact, one of my friends – a former Portland police officer who has been on Beerchasing visits, advised me to avoid it for our own welfare based on his experience as a cop.

When queried for specific examples, he stated, “The guy who did a car prowl and ran into the bar to hide.  Noise complaints not uncommon.  The occasional bar fight we were called to suppress – usually a boyfriend/girlfriend argument when they had too much beer.

Honestly, probably not any more incidents than a bar of comparable size.  The patrons more often got in trouble walking home and peeing on the side of the building or passing out on the sidewalk.”

Chris noted that a number of years back, they had a few “burps,” but those are from days gone by.  A group of regulars sitting at the tables on the “patio” right outside the door stated, “Slammer is the best (and friendliest) bar in Portland.” 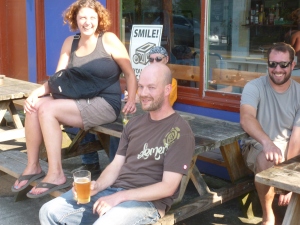 “The Friendliest Bar in Portland.”

Slammer doesn’t have a bunch of beers on tap or an expansive menu (essentially sandwiches, tacos, chili and sides), but the food and beer is cheap and they have a reputation for strong drinks and friendly bartenders.

This old, red Victorian house with two renovated apartments up-stairs, the small bar on the ground floor and a bunch of Christmas lights strung all over the exterior is worth a visit.

I will conclude by stating that it is always a treat to drink beer with attorney Mansfield.  Besides being honored as an Oregon Super Lawyer since 2009, he is a talented musician and in his younger days played in a rock band.  Another example of his tendency to analyze and interpret language literally is evidenced by this communication with the police dispatcher when he was at the U of O and a wild and crazy guy:

Mansfield:  “I’d like to report a theft at our residence.”

Dispatcher:  “What is your street name?”