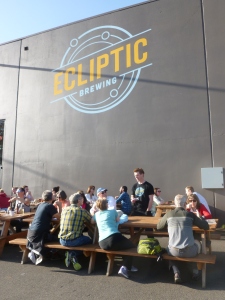 This brew pub on the southern edge of N. Mississippi Avenue opened in October 2013 – a creation of John Harris, who has extensive (three decades) experience in the craft brewing industry starting with McMenamin’s (the first brewer to make Hammerhead), then Deschutes and Full Sail Breweries as brewmaster before opening his own venture.

Would you rather discuss the obliquity of the axial tilt or just raise a mug?

The beers are named after stars and their website explains, “The name Ecliptic Brewing unites John’s two passions: brewing and astronomy and is the yearly path around the sun on planet Earth.”

For the science geeks who want to get more serious, however, a more thorough definition is, “The plane defined by the earth’s orbit projected onto the celestial sphere, along which the sun appears to move as viewed from the earth.”

“Appears” is emphasized above because technically it is an illusion – to fully understand involves grasping the “obliquity of the ecliptic axial tilt” – a concept which would motivate most people to reach for several mugs of their excellent beer.

According to Willamette Week’s Art and Culture Editor, Martin Cizmar, in his 2/14 review,“It’s his (Harris’s) goal for Ecliptic to be considered among the top 100 restaurants in town, winning inclusion in either WW’s glossy Restaurant Guide or The Oregonian’s Diner.”  (The critic was not overly impressed with his food on his three visits and felt the ranking would be in the top 250 restaurants although most of the recent comments about the food in social media are positive.)

While they have celestial goals, the experience for us did not break into orbit.   The menu and the food were pretty good, and as expected, they brew some excellent beer.  However, after visiting over 100 bars, taverns and brewpubs on Thebeerchaser’s Tour of Portland, Bars, Taverns and Pubs in the last three years, I would suggest that decent food and good beer do not make up for a sterile environment – which lacks any ambiance – at least at this point.

Ecliptic is a former auto body shop, with picnic tables massed in an uncovered large concrete parking lot which slopes downhill.  As one Yelp reviewer recently opined, “I think the main thing holding this place back is the rather sterilized/antiseptic feeling the location gives. It’s a big space, but there doesn’t seem to be much character.”   (March 22, 2015)

The interior is also pretty barren – the kitchen is essentially integrated with the dining space – spacious, but the walls are stark and lights bright conveying a cafeteria-type feel.

That said, they have great sandwiches and salads.  The 1/2 pound Ecliptic Burger was delicious as was their grilled salmon sandwich and Caesar Salad.  The fries are plentiful and cheap.

As would be expected, the beer is their strength and they have ten beers on tap at a very reasonable price ($4.75 for a 16 oz. pint).  Five of their beers were nominated for Willamette Week’s 2015 Beer Awards:

Perihelion Crimson Saison – Best of the Island of Misfit Beers 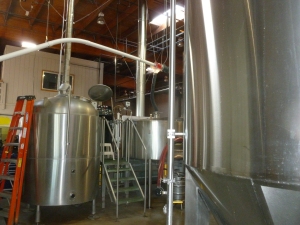 A Galaxy of Good Beers

Oregon Live in an April, 2015 post, stated:  The newest addition to Ecliptic’s line of beers is named after the Helix Nebula, a large planetary nebula and sun-like star (also known as “The Eye of God”) located in the constellation Aquarius. Helix is a crisp and refreshing golden lager, dry hopped with Citra and Jarrylo hops for extra citrus, spice flavor and aroma.

The servers were responsive and knowledgeable and Ecliptic is attempting to be creative and flexible – again quoting from their website:

“…..beer and food menus (will be) in constant change and rotation throughout the year. Our seasonal menu will rotate every 6 weeks on the old world calendar. Changes at Samhian, Winter Solstice, Bridgid, Spring Equinox, Beltane, Summer Solstice, Lammas and the Autumnal Equinox.”

So while Ecliptic does some things very well and is still a young establishment, Thebeerchaser’s inclination is to move several blocks up N. Mississippi Avenue and return to Prost – where one can also drink some excellent German beer and have comparable food, but raise your mug in a much superior setting – either in their interior which radiates warmth and character or on their attractive and covered wooden deck.

Or alternatively, pick up a bottle of one of the four Ecliptic offerings at the Belmont Station bottle shop and take it into the Belmont Bier Café and raise a mug with Beer Goddess, Lisa Morrison – both options more earthy and mundane than the stellar ambitions of Ecliptic.  Of course, one can also head out to Multnomah Village for the a nautical choice and dive bar ambiance at the Ship Tavern. 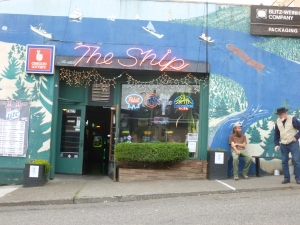 PBR rather than beers named after celestial bodies, but a down-to-earth clientele….

5 thoughts on “Ecliptic Brewing – Shoot for the stars but settle for an earth orbit….”