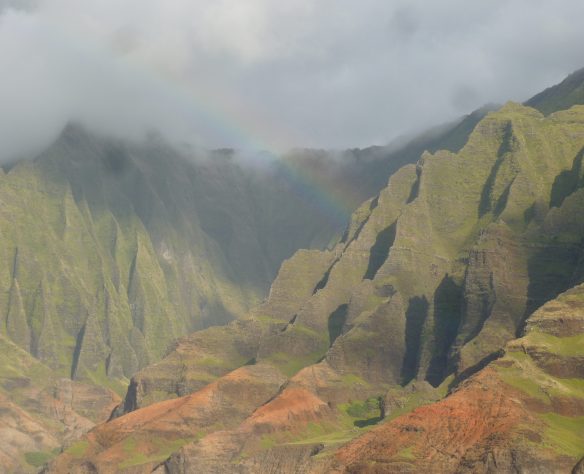 The beautiful Napili Coast on the northwest side of Kauai

After a great week on Oahu at Koalina with some of our family, Thebeerchaser and spouse moved to an island we hadn’t visited before.   Our week in Lihue, Kauai was wonderful  – outstanding scenery, easy to navigate and memorable food and drink. 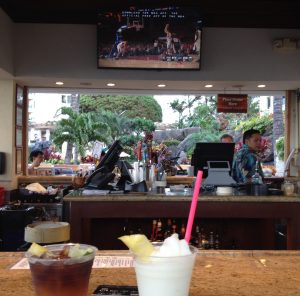 While still in Oahu, watching the first two Blazer playoffs losses against the Clippers was mitigated by sipping a Mai Tai while my daughter downed a Lava Flow.

Unfortunately, the little umbrellas from the drinks won’t work for future rainy seasons in Portland.

And I was reintroduced to Primo Beer – “Hawaii’s orginal beer…” – the first time since a 3/c NROTC midshipman cruise that took me to Pearl Harbor after my freshman year at Oregon State.

In this summer of 1967, an evening yacht cruise along Waikiki Beach with steaks and Primo is a vague recollection because many of the brain cells retaining the memory were destroyed.   But an offer of a free hat with the purchase of one beer was irresistible.   There was a little disappointment to see that Primo is now owned and operated by Pabst Brewing Company.

Moving to Kauai, we had a wonderful ocean-view room in Lihue and a two-minute walk to Duke’s – great dinners in both the bar and the restaurant upstairs.

And Duke’s – only a stone throw away…

Knowing that we were going to ultimately visit the two breweries on Kauai – I restricted my initial alcohol intake to cocktails – one fit for the Gods – a Mango Martini and one called a Tropical Itch – passion fruit juice, orange curacao and vodka with a dark rum float

The Bar at Duke’s

Duke’s, besides their legendary salad-bar buffet, also had great fish and a beet and kale salad with shrimp and goat cheese that was our entrée’ on one evening. 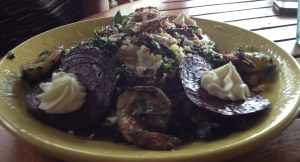 A scrumptious combination of beets, kale and shrimp

Lest you think we spent the entire time eating and drinking, we hit the both sides of the island in addition to having an unforgettable sunset cruise through Blue Dolphin Charters along the Napili Shore on northwest Kauai – magnificent waterfalls (although one can see comparable sights only an hour from Portland…), a pod of dolphins and a stunning sunset capped off by a champagne toast.

Blue Dolphin Charters lived up to its name with this escort of our boat. 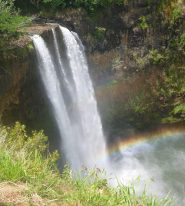 Since this is a blog about bars and beers, I should return to that topic and mention our visit to Kauai’s two breweries – yes that’s right.  Seems stunning that the island landmass of 562.3 square miles has only two.

Not just eating and drinking…

In contrast, Portland’s area of 145 square miles boasts 61 breweries in the city limits although the comparison may not be valid since Portland is not an island in the Pacific and it has more breweries than any city in the world.

For you statistical geeks, that’s one brewery for every 33,500 people on the island versus a per capita of 10,150 in Portland.  Perhaps we should toast to that fact.

Kauai Island Brewing Company (KIBC) – We heard that  KIBC was located on the historic Waimea Plantations, but found an empty building and were directed to an industrial complex in the City of Port Allen where it moved two years ago.

“(We have) an industrial theme to go along with both (the) surroundings and purpose of crafting quality beers. (Our) 35-foot high corrugated metal ceilings and walls give an open and spacious feel. (Experience) the retro atmosphere with chandelier lights hanging from the ceiling, a catwalk leading to the second story mezzanine over the entrance, and picture perfect views of the sunset over Port Allen bay.”

A bit stark and industrial

However, KIBC has very little ambiance and seems pretty stark in spite of their spin.  That said, Fred the bartender was very friendly and helpful in our selection of one of their ten beers including letting us sample several.

We chose the Cane Fire Red (“a full bodied ale has a deep red hue with a distinctive malty character”) and the Westside Wheat (“brewed with equal amounts of malted barley and wheat….and just a touch of caramel malt for color and body”) which we enjoyed.  The five wide-screen TVs do not add to the charm although at least Boston won the NBA playoff game we watched. 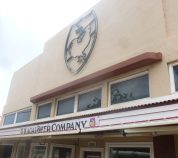 Kauai Beer Company (KBC) – We really liked this small brewery although perhaps the fact that the general manager and head brewer, Justin, and his girlfriend, Kim, are both Oregon State grads, created an inherent bias.

They purchased equipment from other breweries and showed initiative:

“Once the equipment arrived, they were faced with the impossible task of putting together tanks and pipes and pumps without any instructions at all, not to mention vital pieces that were missing. Justin had to become an expert welder in this do it yourself arrangement.” 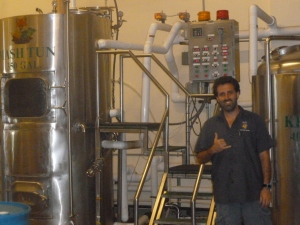 Justin, an OSU grad with good management instincts and learned how to weld…..

They opened in fall of 2013 and are currently open Wednesday through Saturday.

Like its competitor brewery on Kauai, the external trappings are plain and anything but exciting, but one walks into a bright and comfortable environment.   And young  Jessie, the bartender was one of the most personable chaps we met in Hawaii.

Charisma behind the bar

Because KBC is one of only two breweries on Kauai, the management is being prudent in their business planning and growth.  They currently do not distribute although they are researching the possibility of making their beer available in cans.

KBC has a nice, but to a certain extent, limited menu with very reasonable pricing.  The reviews of the beer and food on social media are positive. Perhaps my favorite was by Marissa, interestingly enough, a Californian, who stated on Yelp:

“Tasty brews, and like walking into Portland, Oregon in the middle of Lihue.”

There was hearty endorsement of their six-beer sampler flights And KBC’s Truck-Stop Thursday, at which two food trucks park on the sidewalk in front of the brewpub at 5:00 PM and people bring their food. into the bar.

They also host a variety of other events such as Kauai Brew Club and Beer for a Cause, in which $1 from every beer purchased is donated to a designated non-profit organization.

We enjoyed the Lihue Lager (“malty German-style pale lager, a blend of traditional and tropical flavored hops”) and a friendly guy we sat next to at the bar, named Sim, who is an electrician and at one time lived in Tigard, raved about the taste of the KoKoBoPo (“a seasonal robust porter, made with chocolatemalt, aged on toasted oakchips soaked with bourbon and whiskey.”).  They have eight of their own beers on tap and a selection of wine and ciders.

I was somewhat chagrinned at how rapidly our time in Hawaii had passed and the little time remaining when I remembered Edgar Allan Poe’s reflection, “Who cares how time advances? I am drinking ale today.” 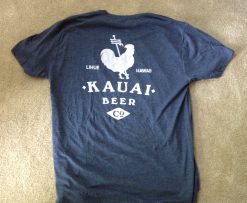 A shirt to supplement the Primo hat…

And touring the island precluded visiting any other bars although one on the same block as our hotel, will be worth exploring upon our return.

The Nawiliwili Tavern, located in an historic building and on a site dating back to the late 1800’s.  According to a 2011 article in The Garden Island – Kauai’s newspaper:

“The site where the Tavern operated was originally occupied by the Hotel Hayashi, built in the late 1890s. Katsuyuki Kuboyama purchased the building in 1925, demolished the weathered structure and built a new hotel four years later, called Hotel Kuboyama……..Hotel Kuboyama survived landslides and two hurricanes, but it wasn’t a match for termites and was demolished in 1994…”

The Naw Tavern – Interesting past and present…

When I stopped in to take a few pictures, there were only a few patrons, but the bar has an interesting history and a was the topic of a recent Hawaii Supreme Court decision in

According to the aforementioned newspaper on April 8, 2011:

“Kaua‘i Police Department used a Taser and pepper spray to subdue four men involved in two fights that broke out early Friday morning in front of the Nawiliwili Tavern.”

The bar closed in July 2011, in part, because of litigation commencing in 2006 resulting from a dispute over disclosure regarding sewer access and maintenance fees.  It finally appears to be resolved when in a fascinating 63-page 2015 opinion the Hawaii Supreme Court (Santiago v. Tanaka)

“…. vacated the judgments of the lower courts (circuit and interim appellate courts), holding (1) Seller’s failure to disclose certain facts regarding the property’s sewer system was actionable under the nondisclosure and misrepresentation causes of action; and (2) Seller’s nonjudicial foreclosure of the property and ejectment of Buyers was wrongful.”

It evidently reopened sometime in 2015 and would be worth a visit if you don’t expect a warm welcome from the staff – at least based on two recent Yelp reviews:

1/11/2016 –“Seemingly nice bar set up, but the bartender was annoyed we didn’t immediately have our minds made up – did nothing to help us decide.”

Oh well, that will have to wait for our next trip and the memories of my birthday lava cake at Duke’s.  And memories of how little umbrellas have a function other than to shield us from rain will sustain us until the next voyage.

1 thought on “Beerchasing in Hawaii – Primo, Microbrews and Cocktails with Little Umbrellas!”