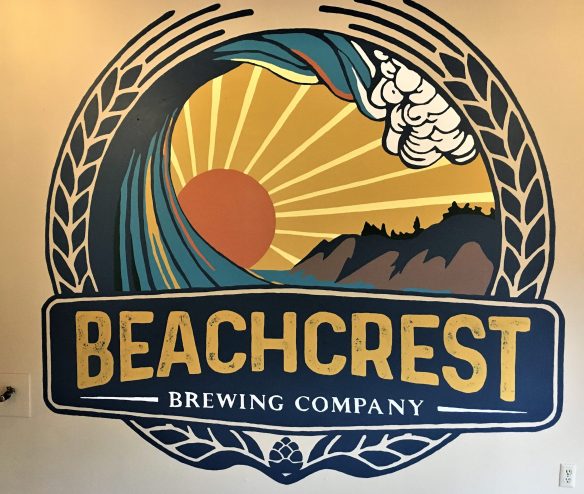 A great logo – created on a crowd sourcing site called “Design Crowd.” The designer was from Bulgaria!

In seven years of Beerchasing, I have been impressed with the number of brewery owners who started homebrewing as a hobby and ultimately became micro-craft entrepreneurs after diverting from their original career paths.  They have ranged from lawyers, teachers, accountants, contractors and public servants to former bartenders.

Our recent visit to the new (December, 2018) Beachcrest Brewery and Pub was the first time that I’ve met two college music majors and former musicians who decided to partner with another couple and embark on a suds-oriented business venture. 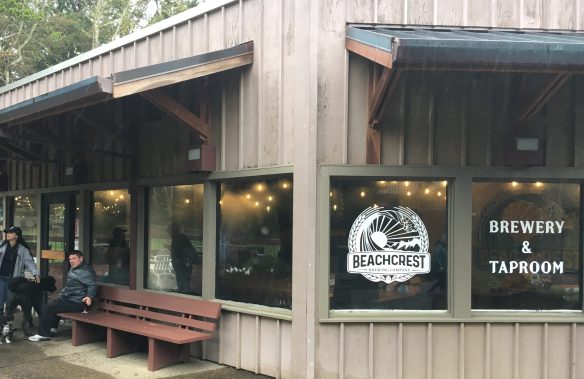 And based on a number of factors such as the quality of their beer, the location and both the internal and external ambiance of their facility, they have great potential for this new endeavor on the Central Oregon Coast just south of Lincoln City.

I might add that some of my favorite Beerchasing exploits have been on the Oregon Coast – first in the fall of 2014 for a three-day jaunt from Pacific City to Newport including Lincoln City and Depoe Bay. 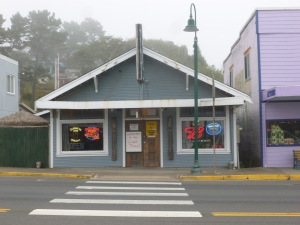 This jaunt with my brother-in-law, Dave Booher and friend, Steve Larson covered such wonderful bars as the Old Oregon Saloon in Lincoln City.

Then on to the unforgettable Tide Pool in Depoe Bay and Newport’s historic Bay Haven Inn in addition to two breweries – Pelican and Rusty Truck. 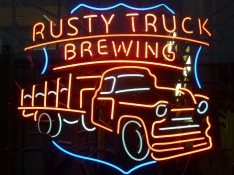 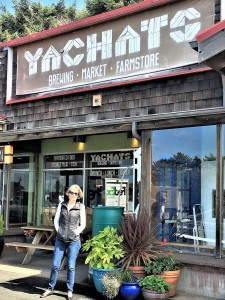 A trip on the southern part of the coast down into California in 2018 with my wife, reconfirmed our love of the Pacific Coast scenery.  It again demonstrated the number of options for good beer on a multi-day jaunt as far south as the beautiful Redwoods. 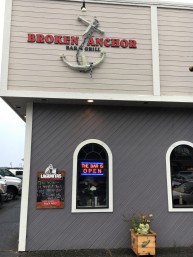 Mugs were raised in Oregon breweries from Yachats Brewing to Defeat River Brewing in Reedsport down to Chetco Brewing in Brookings and also one of our favorite bars – the Broken Anchor Bar and Grill in Bandon. https://thebeerchaser.com/2017/11/13/beerchasing-on-the-south-oregon-coast-and-through-the-redwoods-part-i/

Now while it is obvious that there is a lot of choice for brewpubs and taprooms on the Oregon Coast, Beachcrest is in a great location – just across from the newly revitalized Salishan Resort. 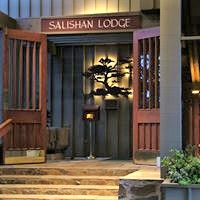 After its opening in 1965 by Oregon icon, John Gray, Salishan became one of Oregon’s premier destination lodges known for its superb architecture and artwork.  After the Grays sold it in 1996, it failed to be viable under multiple owners. 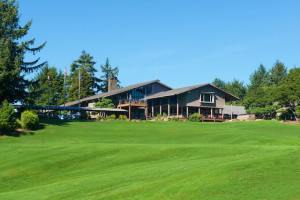 “It was purchased in November 2017, at a foreclosure auction by a private equity investment company…..and is now managed by Alpha Wave Investors hospitality company, Soul Community Planet.  CEO Ken Cruse believes they can return what is arguably one of the state’s most treasured lodges to its old glory.   (Oregon Live – January 31, 2019)

Amy White and her husband Matt, are both graduates of the Lamont School of Music at the University of Denver.   Amy plays the piano and is a vocalist and her husband is a sax player in addition to other woodwinds.   They lived in Denver and two years ago decided to move to Oregon. 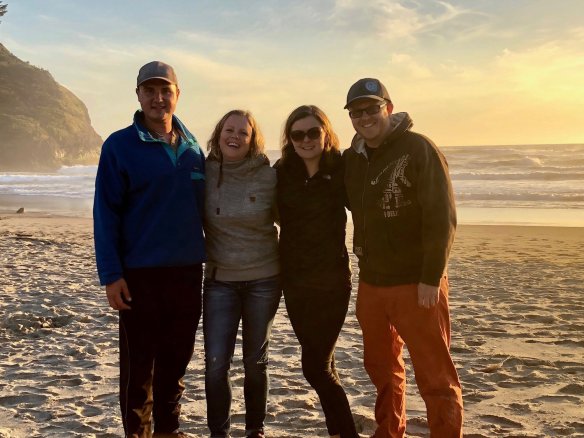 The four talented and adventurous entrepreneurs

“Beachcrest Brewing Co. started as the dream of lifelong musicians Matt and Amy White who spent many summers visiting the enchanting Oregon Coast.  After years of dreaming of living on the coast the duo made the plunge and relocated to the central coast to follow their passion of combining beach life, craft beer and great music.”

They partnered with Megan Leesley – a CPA who does the Brewery’s accounting and Sean Sissel, a contractor, who spent five months in 2018 building out the brewery.  Both still live in Colorado and will be working in the brewery periodically. 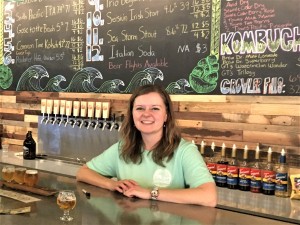 Amy, who was our bartender that Saturday afternoon, exuded enthusiasm for their project and I was impressed with the couple’s initial efforts to interact and become part of the micro-brewing community since they started planning and after opening.

They have visited the Benedictine Brewery in Mt. Angel – I’m biased about that one.  They know and expressed support for their competitors up and down the coast ranging from Rusty Truck to Wolf Tree Brewing, which now has a taphouse in Newport, among others. 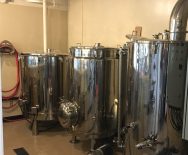 For a small brewery (3.5 barrel), they have an impressive line-up with eleven craft beers, wine (cans) and draft hard cider and draft Kombucha. 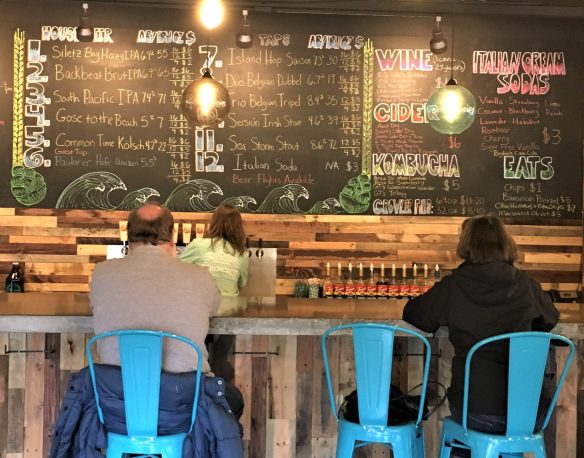 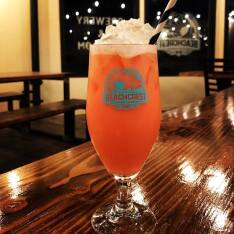 They also have eleven marvelous – from the appearance and the way several kids were delightfully “attacking” them – Italian cream sodas for $3 (I was sorely tempted….)

She offered a good explanation of their tap list and let us sample a number before we ordered a flight – they allow the patron to “build your own” flight with each 4-ounce sampler costing only $2.  You can “take off” with anywhere from two to eleven beers in your flight.

We opted for a tray of four consisting of their best seller – the Siletz Bay Hazy IPA – 6.1% ABV (also our favorite) two other IPAs – the Backbeat Brut 6.0% and the South Pacific 7.4% – plus the Common Time Kolsch 4.2%.  The IPA’s all had nice hoppy taste and good aroma, but the Kolsch seemed somewhat bland – maybe because we liked the others so well. 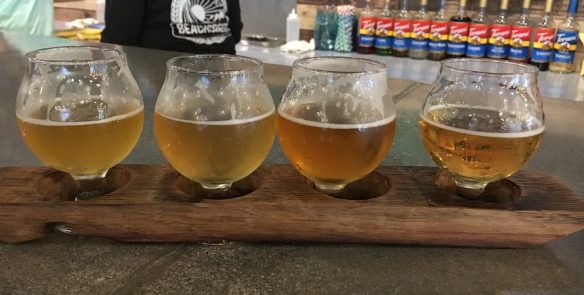 Build your own flight…..

Sean did a great job in his build out of what used to be a coffee shop.  The space has great internal and external lighting and long community-type tables.  While we were there, a number of families with kids drinking Italian cream sodas, dogs and just tourists doing the coast were enjoying the pub. 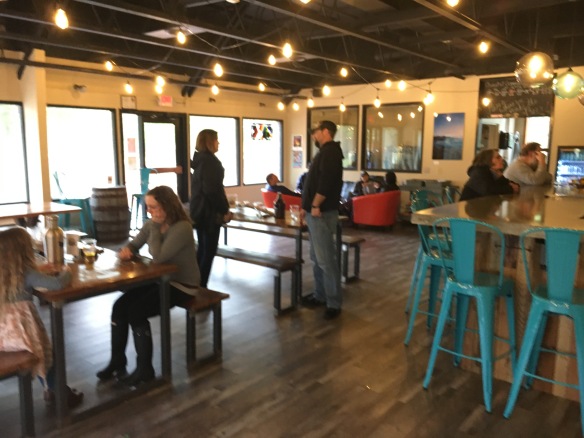 But wait until a sunny day later in the spring and this summer, not to mention Oregon’s wonderful fall weather.  The deck area is going to fill up with people “drinking” in the coast air, the trees, the manicured golf course and the adjacent creek which bubbles.   I can’t think of a comparable scenic vista from a brewery deck that combines all of these elements. 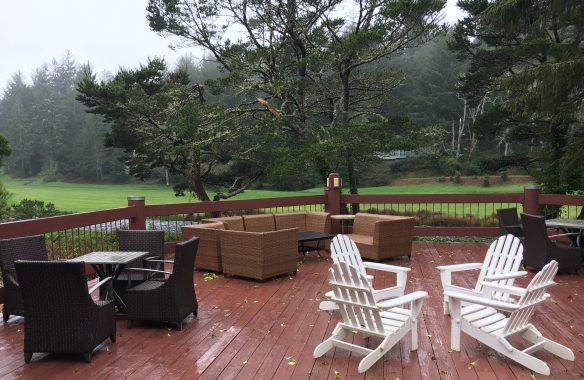 Beachcrest, besides Bavarian pretzels, pita chips and hummus and marinated olives, has no food at the brewpub; however, the Mangia Italian Deli right next door has pasta, cheeses and sandwiches and their food can be brought in.  Food carts will probably also be part of the plan. 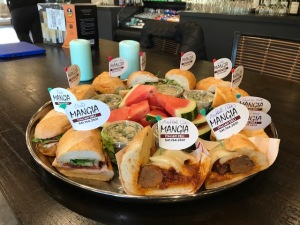 And while Beachcrest will be a draw on its own, a factor in their success will be the result of efforts to revitalize the Salishan Marketplace.

We remember taking our family there years ago for the good restaurant and the diverse shops which included a bookstore, specialty grocery, an impressive gallery, toy store, a candy shop (with outstanding caramel corn) and other interesting boutiques.

Unfortunately, that changed given both Salishan Resort’s troubles and the economy.   The contrast is conveyed well by this Facebook post last year by JB Hunter before revitalization efforts

“After an absence of 12 years, my wife and I stopped in there in August 2017. The once-dynamic and bustling place was a ghost town with all the former wonderful shop tenants booted and brown packing paper plastered all over the storefront windows. Saying we were stunned was an understatement although we understood after checking into the downward spiral that Salishan had undergone.”

However, the impetus is already present and the groundwork laid to change that imag.  Besides the Deli and the Brewery, the Marketplace now has a fitness center, an upscale gallery and an appointment-only barber shop. 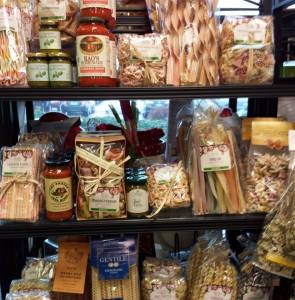 The interesting and quality wares from Java Depot…

And we were delighted that long-time Lincoln City small business the Java Depot and Culinary Corner – a wonderful specialty coffee and kitchen and gourmet food shop is moving from the strip mall by Safeway to the Marketplace.

In fact, that’s how we learned about the Brewery.  The owner of Java excitedly told us about their forthcoming move and to check out Beachcrest.  As stated on their Facebook page:

“As most of you know we’re moving to Salishan Marketplace. Expanding our meats & Cheese selection and adding food items and hand dipped Tillamook Ice Cream.”

Matt and Amy are also trying to attract people and build a community with events including the “Geeks Who Drink Trivia” broadcast every Wednesday night, live music and an innovative idea named “Pints and Poses.”

“Enjoy a rejuvenating yoga flow at the new Salishan Yoga Studio followed by a refreshing brew at Beachcrest.  Class is $15 and includes your first post class beverage of choice.  Meet 15 minutes before class to register in the Salishan hotel lobby.   Next classes will meet on April 14 & 28.” 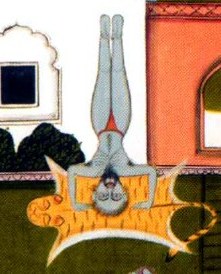 Note: I don’t know what a yoga flow is, but if there is a free brewski and tap flow afterwards, I am willing to assume the position…”

Lincoln City and the surrounding coastal communities are Oregon treasures.   They rely heavily on the support of tourism for their economic livelihood.

So when you are passing through Lincoln City on the way to Newport or just hitting Lincoln City itself, make a point of stopping at Beachcrest Brewery to have a beer, sit on the deck and say hello to Amy and Matt. Then get an expresso to-go at Java Depot.

Take the words of this Yelp review as recently as April 5th to see what awaits:

“Gem on the Coast!   Wonderful selection of unique craft beers, friendly atmosphere, Beachcrest Brewing is truly a splendid destination for Ale aficionados and casual beer drinkers alike.  Do yourself a favor, try a soft pretzel with the stone ground mustard…. Magnifique.” 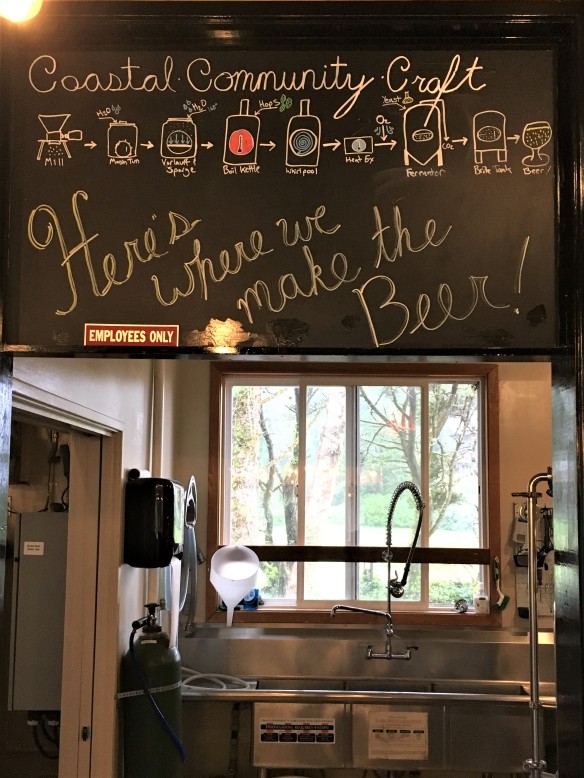 8 thoughts on “Ride a Wave to Beachcrest Brewing”