One of the advantages of thebeerchaser tour of pubs in Portland is that the number of bars and taverns facilitates visits to multiple establishments in one outing.  Such was the case on the night that we hit Laurelthirst – within less than two blocks we saw the sign for Migration Brewing Company and its pub.

“At Migration we celebrate the tradition of crafting great beer, while sharing the history it holds and the bonds it creates between the joyous beer drinkers of Stumptown. So come on down and share a laugh with us and take part in the timeless tradition of drinking beer!”

The rationale behind the name was beyond my research, but I assume the wings on the logo are an implicit reference. We visited on a Thursday night and unlike evenings when there are Blazer or Timber games, the place was not crowded.  Our bartender/waiter was a nice guy named Scott who was very helpful telling us about the Brewery and beer options. 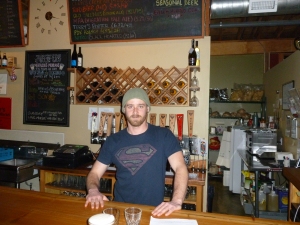 There is a Happy Hour during every Blazer game and the Pub has Bingo every Tuesday night. The setting was pretty similar to the other brew pubs we visited including Coalition and Amnesia i.e. no frills –  big garage door (open in fair weather), cement floor, high ceilings and a patio with picnic tables.

Scott said the place used to be a radiator shop.  The brewery is in the back behind the bars. An apt description by one patron – “Unpretentious beer/wine only industrial micro joint, not unlike any other in the town.” The Coalition Brew Pub had the best environment of the three breweries visited to this point, but all lack the character of a good neighborhood or even a dive bar.

Distinguishing Characteristics They have focused on the Blazers – even to the extent of naming one of their beers after the former Blazer  i.e. “Terry’s Porter – “Big and Bad is the way this Porter plays the game.” 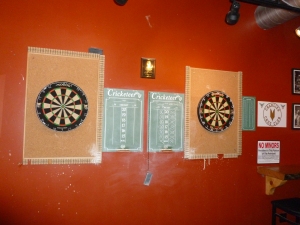 One regular now only frequents the pub on nights when there are no sporting events so he can focus on enjoying the good beer rather than be caught up in the raucous atmosphere.   The beer is good although the variety is not extensive – seven of their own brews –  “Everyone who works at migration is so proud of their beers, and so friendly you can’t help but catch the fever.”    We had a Clem’s Creme Ale  – “Light on the hops, big on the flavor this blond ale is made with flaked oats which lend to the beer’s smooth creaminess” –  and it was excellent.

The food is traditional pub food and was good. Evidently, they have live folk music on Sunday nights.  The Migration Brewery is a good example of some young entrepreneurs taking a risk and their endeavor deserves support.  Check the sports schedule and make your decision when to visit based on the experience you want.   Migration Brewery Pub               2828 NE Glisan