The Laurelthirst is a neat and old neighborhood-type bar with an added attraction – great live music in the evening – and there’s usually either minimal or no cover charge! Entering the bar is like a walk back in time – in fact there is almost a slight scent of old second-hand smoke that lingers like a relative who over-stays his visit.   ”It’s  somewhere between a historical hippy dive and a cozy live venue, this place oozes earthi-ness and kitschy humor.”

There is dark wood, a lot of antique memorabilia hanging from the walls – an old rideable tractor toy, a vintage tricycle and a pitchfork with a sign saying “Be Good or Be Gone.”

Memorabilia Adds to the Ambiance

Our bartender was a very nice lady named Angela, who has worked at the pub for ten years and is finishing her graduate degree at Portland State. 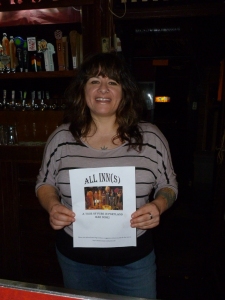 Angela – An Educated and Friendly Bartender

As described on the brewery’s website: “This beer bridges east and west with a lane dedicated to riders who aren’t afraid to get dirty. Three kinds of organic caramel malts and a 24 pound whirlpool hop bomb keep things interesting while the wheels go round and round. Cheers to narrow knobbies, kazoos, and more cowbell!”

I also had a very good Engleberg Pilsner from Upright Brewing Company in Portland. 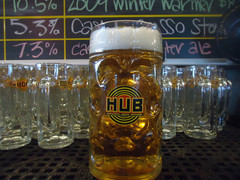 According to Angela, their evening clientele is very mixed and interesting. One can see earthy-types of all ages, professors, students and neighborhood yuppies.

There is a small room separated from the bar by a neat corridor with two pool tables and video machines.

Adding to the nice environment were a number of sketches and paintings from various local artists adorning the wall – exhibited on a rotating basis (Janet Julian, a musician who has played at Laurelthirst, was the featured artist when we were there).

Also a wall with sketches and photos of regulars who are now drinking their beer in heavenly bliss and eternal suds… Their Happy Hour is each weekday from 6:00 to 8:00 P.M. (not for those who are deceased)

Besides the unique and homey environment, the music also differentiates Laurelthirst from many neighborhood bars.  A very small stage in the main bar area hosts the bands which range from bluegrass to jazz.

The Stage — A Variety of Good Music

When there are quality groups, the area can become very crowded with observers and dancers — but that adds to the charm.

Good local and NW groups perform daily and on weekends.  For example, in one recent week, the groups featured at the pub included: 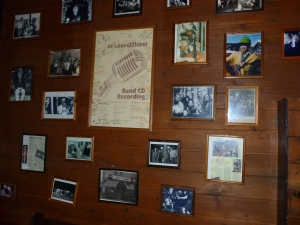 Memories of Bands from the Past

Whether it is to hear a good band, sample a NW microbrew or have a good breakfast, the Laurelthirst is a neighborhood treasure in NE Portland.