If you’re cruising along SE Hawthorne Blvd., you might not notice Gold Dust Meridian (GDM).  That’s because they “stuck a bar in a mid-century accountant’s office,” or as stated by The Portland Tribune, “If you hanker to party again in the basement of your parents’ suburban ranch house, GDM will joyfully recall those halcyon years.“

“Perhaps a juke box would look good in place of this desk….”

So why should you want to frequent a bar where CPAs once calculated double-declining balance depreciation and bemoaned the impact of the alternative minimum tax?

Well, it’s because GDM gets many superlative reviews, including that of thebeerchaser and his group – three lawyers from the Portland law firm of Whipple & Duyck P.C.  GDM has even received plaudits from Playboy Magazine as one of the Twelve Top Late Night Spots in the Nation in 2011:

“After Midnight, compiled by the editors of Playboy, provides a coast-to-coast glimpse at some of the most coveted late-night watering holes in the nation.  At these legendary spots, after-hours thrill seekers will have no problem catching live music, enjoying generous cocktails, hobnobbing with eclectic crowds, savoring scrumptious late-night eats, and in some cases, learning a bit of local history.”

The Portland Mercury has also named it one of the best happy-hours in Portland in multiple years.  (Seven days a week from 2 to 8 PM) Keeping in mind the insightful quote:  “You don’t love someone for their looks, or their clothes, or for their fancy car, but because they sing a sing only you can hear,” let’s discuss the melody emanating from GDM when you walk into the bar:

The Interior – While the exterior doesn’t beckon, walking in GDM reveals in their own words, “large comfortable booths, slanted teak ceilings, a custom bar built with reclaimed Oregon timber, and a dimly lit brick and wood façade.”

Another review summed it up well: “The past and present rarely collide so nicely.”   Unlike a lot of bars, conversation is promoted because there are NO televisions, pool tables or video poker machines –  a very refreshing touch.  You can get a deck of Trivial Pursuit to tap your brain, however. They have live music on Tuesday and Wednesday nights and DJs on weekends.

The Art –  it is truly distinctive as evidenced by the two photos below.  A number  of pictures such as “Bird of Prey” are oils on canvas by local artist Hickory Mertsching (“I set out to create a peaceful contemplative setting, paintings that illustrate the relationship between man and nature, a reminder of our state of being and the simple aspects of life.”) 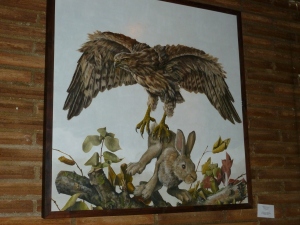 ASCII Art – Who is Mandroid?

There was also a large computer-generated “pop art” piece on the south wall, which was very unusual.

The Food and the Cocktails – Naomi said that management seeks ideas for cocktails from the bartenders and servers and Marcus affirmed, “We change our classic and champagne cocktail menu with the seasons to make it more dynamic.”  They have about ten classics ranging from a Marionberry Margarita to a Root Beer Cowboy (WL Weller Bourbon, Apple Jack, Fee’s Old Fashioned Bitters and Root Liqueur) and ten more champagne cocktails such as Death in the Afternoon (Champagne,Trillium and Absinthe).

Scorpion Bowl – because it stings when you don’t expect it….

And there are the three Family Bowls – also known as “Scorpion Bowls described by one who imbibed as,“A sixty-ounce drink served in a huge bowl, garnished with fruit and hanging monkeys and enough straws to share with you friends – these things are dangerous – the zombie tastes just like punch.”

Being somewhat reserved, we ordered some very good Oregon Beers (GDM has ten bottled beers and eight on tap) – Apocalypse IPA from 10 Barrel Brewery in Bend and Double Mountain IPA from the brewery of the same name in Hood River.

The one exception was Dan Duyck who ordered a $1.50 Olympia.  When asked for an explanation, Dan, who hales from the rural area of Washington County stated, “It’s beer to bale hay by…..To this day, whenever I catch a whiff of beers such as Oly, Blitz, Rainier and Heidelberg, I am reminded of my youth and that beer is the true reward for hard work  no matter what your age.”

They also have a number of “Whiskey Flights” where one get shots of three different whiskies ranging from $15 to the more rare at $28.

The food, ranging from appetizers to salads to sandwiches, is also very good and not traditional “pub grub.” –  “It’s 1950’s Trader Vic style with sharable plates” – I had a superb oyster poor boy sandwich and one of the lawyers had macaroni and cheese which he described as, “with a wonderful crust and rich and creamy throughout…..”  We then talked about the trend where good Mac & Cheese seems to be ubiquitous on quality pub menus these days, which led one of us to ask:

Available in Fine Bars and Goes Well With Beer

Q: How prevalent is Mac ‘n Cheese on pub menus these days?

The Patio – With the ban on indoor smoking, most bars have patios these days, but many are just stuck in surplus space.  While the outdoor tables in front of the GDM are right on Hawthorne and noisy, the patio areas in the back and at the side have nice vegetation and are spacious.

Marcus and his partner in the bar, Warren Boothby, have a philosophy that to compete and draw patrons, “a bar has to be more than just a bar.”  Even the name Gold Dust Meridian is different.  Marcus said it was developed five years ago, “After a few beers and the (Prime) Median was starting place, of sorts, just like our new venture….”

Gold Dust Meridian stands out as a quality bar that distinguishes itself in a number of ways.  Prime yourself for a visit.

2 thoughts on “Gold Dust Meridian – A Nugget on SE Hawthorne”