Inauspicious and low-key entrance to 1856

I asked my friend, Chuck Mitchell, a semi-retired plaintiff’s attorney, to join me for a foray into NE Portland where Chuck and his wife now live.  I knew that this former Eagle Scout and lawyer would not only be trustworthy, loyal, helpful, friendly, etc. but he would also ensure that we would not end up on the wrong side of lawsuit in case of a car wreck or personal injury ranging from a fist fight to slander or libel.  In fact Chuck is so proactive and aggressive that he once called 911 for rescue efforts when the escalator in Nordstrom’s broke down while he was in between floors.

Tiga – No functioning taps on the kegs that night – we will return, however!

Although our initial spot was a quiet bar named Tiga in Prescott Village, the tap to their kegs went blotto – meaning no draft beer – and the bartender suggested we try “1856” next door.

As evident from the first picture above, we might not have seen this bar and bottle shop otherwise, but it was a great recommendation.  We walked into a large room – a former barber shop which had been gutted and remodeled –  it had a small bar and hundreds of sparkling bottles of different beer, wine and ciders arranged on shelves.  Matt, the friendly and knowledgeable bartender/partner in the venture told us they had just opened in September of 2012. One of the other partners is, Yetta Vorobik, who also owns The Hop and Vine another bottle shop and bar on N Killingsworth. 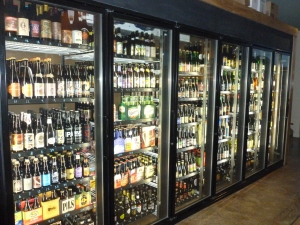 Besides 6 rotating draft beers and a cider tap, over 400 varieties of domestic and imported beer

Our first question to Matt, was the rationale for the numeric moniker of the bar.  He related that 1856 was the year that Louis Pasteur did landmark work on fermentation – obviously important to people in Matt’s line of work – and a lot of us who are beer and wine drinkers too.

Some research challenged that assumption, however, since at least one published timeline of Pasteur’s life did not list 1856 as a critical period – it focused instead on his later invention of the chicken chorea vaccine in 1878, and then in 1884, the rabies vaccine for dogs and used on humans the year afterwards. 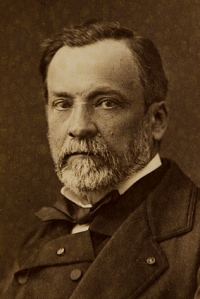 1856 – although it was only beet root alcohol, the year of Louis Pasteur’s first paper on fermentation

It can be said that in 1856, a French industrialist did finance Pasteur’s research concerning the production of beet root alcohol. It was the beginning of his work on yeast, but since the scientist’s more important fermentation studies occurred in 1857, I tried to persuade Matt, that the bar should either be renamed or  commemorate one of the other historic events in 1856 such as:

The founding of Sigma Alpha Epsilon fraternity in Alabama;

The discovery of borax in Tuscan Springs, California;

Matt vetoed the name change and appropriately ended the debate by asking rhetorically why it was even necessary to abolish secrecy if they were, in fact, the Know Nothing party.

The Libation Selection – As stated in one recent Yelp review, “This one’s a no brainer!  1856 has an incredible selection of beer and wine, both local and imports.  The draft list is always changing and interesting. Great music, knowledgeable and friendly staff. …everything a bottle shop should be.”

And its not limited to beer and wine.  As stated on the BrewPublic Blog in October, “It’s a new bottle shop/bar with an eclectic and diverse selection of libations…..over 50 ciders, and a variety of bitters, vermouth, and sake.” 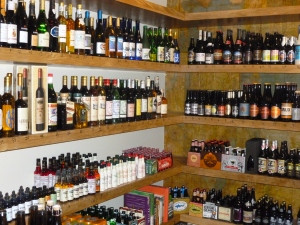 Even more shelves of beer, wine, cider and sake…

Eco-Friendly – Matt was extremely friendly and the owners of 1856 set out to be amicable to the Earth in their facility and operations as well.  One of the partners is an owner in JRA Green Building and all materials were sourced locally and using green-friendly products such as concrete, shelving and floor treatments.

All lighting is LED and the water heater is energy-efficient.  The bench in front is hand-made of reclaimed old fir timbers.

Matt and Chuck at the hand-made concrete bar, discuss the six rotating beer and one cider taps.

We sampled two beers from the six available on tap that night – they also have one cider tap.  Chuck had an Old Silenius from the Migration Brewery and Thebeerchaser enjoyed an Enkel from Portland’s Commons Brewery.  Both were outstanding and we debated buying a growler or jug of each, which 1856 sells or fills if you have your own.  Matt stated that in December they are featuring some great Belgian and German winter ales. 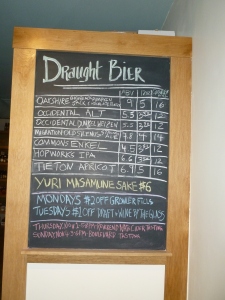 Rotating tap selection on “The Bier Board.”

1856 is a great addition to Portland.  The beer, the music and the ambiance were a treat.  We had dinner afterwards at their neighbor Grain & Gristle. Pok Pok Noi is also right next door.  1856 is still working on their web-site but we expect good things in the future from this new venture. 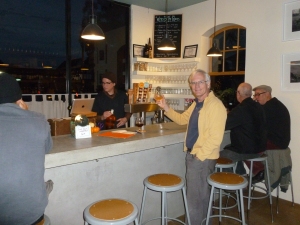