The Mendenhall Glacier outside of Juneau

As we continued our cruise on the Holland America ship, Statendam, after a day and one-half cruising through the Gulf of Alaska from Seward, we had our first port call at Haines, Alaska.  At first, I was skeptical.  Why would we want to stop at a city named after an underwear brand….? (actually that is Hanes – America’s first name in comfort since 1901), but it was one of our favorite stops on the cruise. 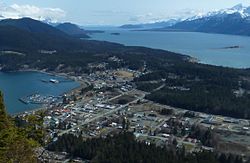 Haines – beautiful in its isolation – has a population of only about 1,800 and is 90 miles north of Juneau.  In 2011-12 season they recorded 360 inches of snow.  It was actually named in 1884 to honor Frances Electra Haines, who established a mission for the Chilkat-Tlingit natives – the two native tribes populating the area.

We took a nine mile bicycle tour to Lake Chilkat in the morning, thrilled by the bald eagles swooping to land salmon, and later that day, I got to visit the wonderful Haines Brewery Co. on another excursion.

Our tour-guide in the afternoon from Rainbow Glacier Adventures was a great lady named Cheryl Mullins –  a transplant to Haines – “When I was young, I followed a guy from Indiana and ended up liking Haines a lot more than I liked him….”   She fishes, hunts, was an extra in the 1991 movie White Fang – filmed in Haines – and even did her moose call for our tour group of eight.

She is evidence of W.C. Fields great quote: “”Marry an outdoors woman. Then if you throw her out into the yard on a cold night, she can still survive.”  Based on her energy and spunk, she would probably be the thrower rather than the throwee.

Paul Wheeler, and his wife, Jeanne Kitayama, are the owners and operators of the Haines Brewing Company.  Paul, the brewer, briefed our group, conveying his passion for brewing good beer – originally a hobby in the 1980’s – and we tasted what were all outstanding brews.

The small brewery, founded in 1999, produces only 380 barrels per year – 90% of which is sold in to nine accounts in Haines, Juneau and Anchorage – and fortunately will be expanding to a much larger site in downtown Haines that will be constructed later this year.

Listen to the video below and you can see the passion and enthusiasm Paul has for his craft.

We sampled four of the ten beers they were currently brewing:

#  my favorite and the most interesting to brew and taste

Lined up for tasting 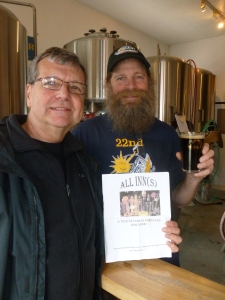 Thebeerchaser and Peter with Spruce Tip Lager and the “logo”

We did not have a chance to visit two of the bars we saw in Haines, but the pictures below show they are interesting..

The Fogcutter Bar in Haines – awaiting our next visit….

The photo below is courtesy of JudyAnn Mathews who has a gallery in Auburn, Washington and was gracious in sending the print and some of her other work which is outstanding – check out her gallery on-line.

The Statendam headed for Glacier Bay – not a formal port stop but a destination which we viewed for over two hours – an unforgettable experience.  Naturalist John Muir’s description of The Margerie Glacier – twenty-one miles long, one mile wide and 300 feet high – as “Miraculously Wondrous.”   It’s almost an understatement as one contemplates the scope and magnificent beauty of this bay. 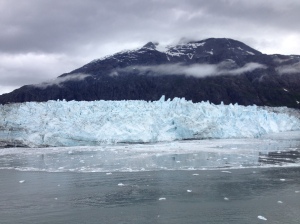 Take a look at the video below to show part of that action – what sounded like a rifle shot, then a rumble, before a large chunk of glacier (tons of ice) slides into the bay and creates a wave which rocked the Statendam from side to side.

A whale-watching excursion on a catamaran was next – with a substantial discount if you don’t see whales – there was no need for a return of cash at the end of the trip!  We learned from our guide, who is a PhD candidate in marine biology, that the humpback whales in the area eat about a ton of food per day although their throats are fairly narrow.

A rare opportunity let us witness them in a cooperative feeding technique in what is described as a “Bubble Net:”

“In this technique, which is unique to humpback whales, the animals exhale through their blowholes while swimming in a tightening spiral so as to create a cylindrical wall of bubbles under the water. The wall of bubbles acts as a net that fish are reluctant to swim through. The whales then suddenly swim upwards through the bubble net, mouths agape, swallowing thousands of fish in each gulp……Some whales take the task of blowing the bubbles, some dive deeper to drive fish towards the surface, and others herd fish into the net by vocalizing.  (Wikipedia)

You can see the gaping mouth in the incredible picture I took below and the video leading up to it:

On the way back to Juneau, we stopped for a visit at the Mendenhall Glacier – another massive ice flow and incredible natural sight. 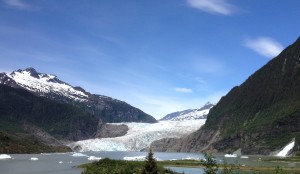 Our excursions kept me from exploring Juneau’s bars and pubs other than to take some pictures and walk in the Red Dog Saloon – supposedly “world famous” but any bar with a line to get in strikes me as a tourist trap rather than a venue worth Beerchaser review.

That said, the Imperial Saloon, both from the exterior and interior, looked like a place worth exploring in the future as did the Arctic Bar.

Intriguing from the outside…

The Imperial — much better character and possibilities….

We departed Juneau in the early evening and sailed that night to Ketchikan.  The rangers, when briefing us about both of the large glaciers and the resulting typography mentioned “glacial rebound.”  This is the gradual rise of land masses that were forced downward by the huge weight of ice sheets.

Leaving the pier in Juneau

It sounded to me more like recovery from a hangover after hearing some very detailed and technical information about geology.  And there was no draft beer on the ship to mitigate this rebound.

Fortunately, the Stantendam had other resources – one which Thebeerchaser honors when not drinking his favorite brew –  and that is a gin martini (up and with olives) – a bargain at $6.99!

Gin rather than vodka – up and with olives….

I was somewhat curious why the ship did not have a few kegs to provide draft beer, rather than just bottled beer, but for those of you who are true beer aficionados and still want to cruise, there is also a remedy.

Click on the link below to get information on “The Top Seven Beer Cruises.”  These cruises cover all parts of the globe – and one in Alaska :
“Now in its 16th year, the Alaska Beer Cruise sets sail Sept 5 to 12 and includes seminars, onboard beer talks, beverage themed activities and tastings led by experts. The tour includes specialty hard-to-find brews distinct to the Northwest region and features a trip to remote breweries in Alaska’s capital city Juneau. The cruise departs from and returns to port in Seattle.”