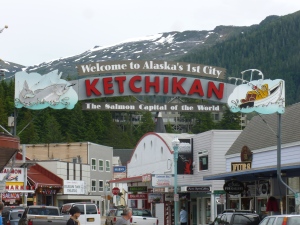 We sailed from Juneau to Ketchikan on the Holland America ship Statendam for the third leg of our Alaska Inside Passage cruise before the final evening voyage from Ketchikan to Vancouver B.C. and the flight home to Portland.

Ketchikan is a charming village-like city that “empties out” in the winter, but is a nice tourist destination in the summer.   It is he southeastern-most city in Alaska, has a population of 8,050 within the city limits – the sixth-most populous city in the state, and according to its website is known as “The Salmon Capital of the World.”

The 49’er Bar – One of Ketchikan’s finest

Since we were there only a day, we did not have an opportunity to actually visit any of the watering holes although a few looked very interesting.

The most interesting bar in Ketchikan

The Asylum looked like a bar that needed a Beerchaser visit based on the politically incorrect slogan in their website:  “We serve nuts….” and several very good reviews on Yelp such as this one from 6/19/14, “I can only attest to the beers, beer prices, and staff–all were excellent. At $3.50 for a true pint for all 14 micro-brew taps, these were the lowest beer prices I’d found in Alaska.”

According to our guide, “Ketchikan has1 tunnel, 3 stoplights, 5 churches and 8 bars.” 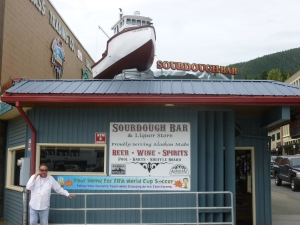 The Sourdough Bar – one of eight in Ketchikan.

The Sourdough Bar and the 49’er Bar also looked intriguing.  And I definitely would have appreciated a brewski before I had my first zip-line adventure in the rain forest about 30 miles outside the city.  (It was a great experience although I told my personable leader – also named Don – my lawyer friends would have killed me if they had seen the waiver I had to sign before hooking up……. 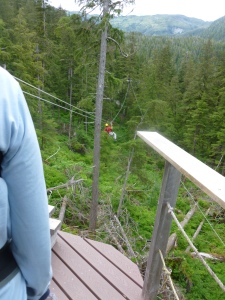 Fortunately, the zip-line went well and we boarded the ship for the last day and one-half cruise to Vancouver BC – then the airplane flight home. 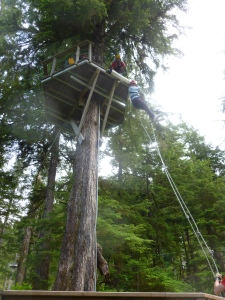 A massive bow and a galley that cooks for almost 2,000 people

Although the Statendam galley cooked for almost 2,000 people (1,250 passengers and 650 crew-members), the food was excellent – great variety and good quality.   So how does one enjoy the culinary excellence without gaining too much weight?

I actually lost one pound.   And the lack of draft beer on the Statendam did not prevent me from enjoying an evening libation – the martini bar with cheap $6.99 martinis and a great jazz trio – Neptunes, led by classically trained bass and vocalist, Gerald Benson.

The seven and one-half day cruise from Seward to Vancouver BC with stops at Haines, Juneau and Ketchikan, after our jaunt to Denali National Park was memorable.

The voyage covered a total of 1,538 nautical miles (1.15 statute miles per) at average speeds ranging from 9 knots to 19 per hour.

And the Statendam is an impressive vessel – 574 crew members – weighing 56,000 tons (the ship not the crew….) with a length of 719 feet and width of 111 feet.  It has five diesel generators consuming 65 tons of diesel fuel per day, and according to HA’s specs, produces 600 tons of potable water daily – 500 tons of which is consumed.

Grizzly mom and her cub.

Besides seeing scads of wildlife in Denali (grizzly bear and cub, mountain goats, caribou, moose, fox, whales, eagles).  We saw spectacular scenery such as that shown below and backdrops which will spoil us for dinners without views for a long time, went on some great day excursions and visited some cool bars and breweries.

No reservation needed for a window seat at dinner.

A passport clerk with a sense of humor…..

And to cap off an outstanding cruise, the immigration clerk in Vancouver B.C. complimented me on my passport photo, indicating a great sense of humor.

Beautiful scenery in every sense of the word…..

My wife rejected my proposal to commit to a January tour of the Panama Canal allowing us to take advantage of Holland America Cruise’s $200 discount on future cruises if a commitment was made before debarking!

Of course, cruise options that followers of this blog might want to explore can be accessed at the link below with details on “Seven Beer Cruise Options,” including one to Alaska:  ” …..in its 16th year, the Alaska Beer Cruise sets sail Sept 5 to 12 and includes seminars, onboard beer talks, beverage themed activities and tastings led by experts.”

That voyage does not appear to be in the cards, so I guess Thebeerchaser will get his vicarious thrills until the next cruise at one of his favorite bars – close to home in Multnomah Village – The Ship Tavern (reviewed by Thebeerchaser in December 2012). 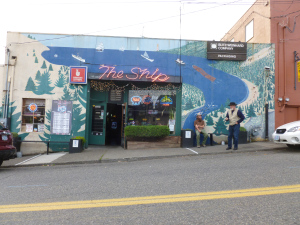 The wonderful Ship Tavern in Multnomah

2 thoughts on “Thebeerchaser Does Alaska – The Final Installment – Ketchikan”