“Lisa Morrison is first and foremost, a great human being.  She also happens to be a beer industry visionary and leader, who wrote the book (literally) on the Oregon craft beer scene.”  Dr. Sam Holloway, University of Portland School of Business Administration Professor and craft brewing consultant. 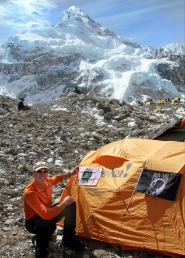 Thebeerchaser each quarter recognizes an individual or group that in his sole discretion, deserves recognition for contributing to humanity – regardless of whether it has anything to do with beer or bars. 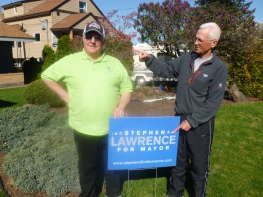 Past recipients have been authors such as Dr. Harry Frankfurt (On Bullshit) or Portland’s own Brian Doyle (Mink River and The Plover), athletes such as former All-coast and then NFL tackle, Craig “The Dude” Hanneman and Viet Nam veterans and heroes, Jud Blakely and Steve Lawrence.

Thebeerchaser and the Beer Goddess with her book

The new Beerchaser-of-the-Quarter, however, is all about beers and bars.  Lisa Morrison, more commonly known as The Beer Goddess is a Northwest institution.

Before telling you about Lisa, who my wife and I met at one of her book-signings and I subsequently interviewed at Belmont Station (she is now the co-owner), I will confess that my experience with Goddesses is very limited.

The late Tom Nutter, my sophomore literature teacher at Oregon City High School in 1963, introduced our class to mythology.  We read with trepidation, of the anger and retribution of mythical females such as Hera (“who turned a competitor into a crane and proclaimed that her bird descendants should wage eternal war on the Pygmy folk.”)  Or consider the Moirai who “were usually described as cold, remorseless and unfeeling, and depicted as old crones or hags.” (Wikipedia)

Unfortunately, we did not study two that are relevant to this blog:

“The immense blood-lust of the fierce lioness (Egyptian) goddess  Sekhmet – only sated after she was tricked into consuming an extremely large amount of red-colored beer: she became so drunk that she gave up slaughter altogether and became docile.” Wikipedia

Ninkasi – “…..the goddess of brewing or alcohol, born of “sparkling-fresh water”. (Wikipedia)

My next exposure to a Greek goddess – defined, “as a woman idolized or adored by a man,”  was at a sorority house dance when I saw Oregon State cheerleader, Pi Beta Phi sorority coed and future New York model, Kathy Loughry  – unfortunately for OSU males, she was already the steady girlfriend of Bobby Mayes, the second-string OSU quarterback.

A definitive work by the Beer Goddess

I was therefore enthused when earlier this year, Lisa Morrison, gave an informative and entertaining talk about the NW craft industry, signed her book, Craft Beers  of the Pacific Northwest:  A Beer Lover’s Guide to Oregon, Washington and British Columbia and agreed to let me interview her and add the “honor” of ”Beerchaser-of-the-Quarter” to her distinguished resume.

Lisa and I then met at Belmont Station – she became the co-owner of this bar in 2013 – a venue which has been repeatedly named by Draft Magazine as one of “America’s Top 100 Beer Bars” (six of those are in Portland).   Thebeerchaser reviewed the bar in 2012, but there have been some changes which will be covered below. (Click this link for the prior review)

Lisa was born in Tulsa, Oklahoma and received her high school and college education in Colorado, the latter at Colorado State University in Fort Collins – now home to the New Belgium Brewing Co. and a lot of great bars and pubs.  After graduation, she served as a television news reporter and anchor and moved to Oregon in 1989, where she went to work for KOIN TV and became their webmaster.

In the late ‘90’s, after negotiating with the station, she started writing a column too – “First Draft,” picked up the rights to the URL “Beer Goddess” and started an hour-long weekly radio show – “Beer O’Clock,” which continued until early in 2015.  Sam Holloway, who is recognized nationally for his consulting work in the brewing industry, described her broadcasts by stating:

“The Beer Goddess and Beer O’clock Radio give an authentic and incredibly knowledgeable voice to the craft beer industry. Not only does Lisa know her stuff, but the lineup of experts on her show, each week, gives anyone with a passion for craft beer access to the best and brightest minds in the industry.”

Two years ago, the owner of Belmont Station approached her about a partnership in the well-known bar and bottle shop and she became the majority owner.  Her writing and management responsibilities precluded continuing the radio show.

Lisa describes researching and writing her book in which she did all the work on her own as “a labor of love.”  For example, she stayed in Seattle for five days and moved into different hotels so she could walk – not drive – to the different brew-pubs she reviewed.   She talked to hundreds of beer drinkers around the region.

Lisa, autographing her “labor of love.”

Her book was labeled by one reviewer as “the standard-bearer” and Fred Eckhardt, Dean of American Beer Writers, stated:

“Lisa, true Beer Goddess, is one of our country’s foremost beer and brewing authorities….Now her tremendous knowledge can help you enjoy the very best of our Northwest accomplishments.”

Lisa has had a busy career – she wrote for nationally syndicated publications, became the first female recipient of the national Beer Journalism Awards by the Brewers’ Association and also founded the Portland Beer Week, the Oregon Craft Beer Month and FredFest (named in honor of the aforementioned Dean of Beers)

Belmont Station – both a bottle shop and a bar – and remember, it’s on Stark Stree!

The Beer Goddess is now focused on Belmont Station, which is appropriate given its reputation in the region.  Opened in 1997, it was originally on NE Belmont Street next to the famous Horse Brass Pub.

They outgrew the quarters and moved to the present Stark Street location – keeping the original name – eventually expanding from five taps to twenty-one rotating draft beers including their own Barley Brown’s Belmont Black plus three ciders.  (While interviewing her, I contentedly consumed a pint of Oakshire Perfect Storm IPA.)   If you can’t decide on one brew, try the “Flight of the Day” – four different selections for $13. 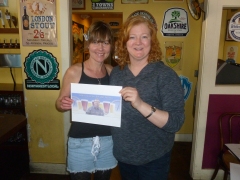 Susan, bartender at Belmont Station with Lisa and Thebeerchaser logo

The adjacent bottle shop which is connected to the bar has over 1,300 beers and ciders from around the globe.  If you want to drink a beer not available on tap, just buy it at the bottle shop and use their chiller at the bar for a minimal $1.50 cappage fee.   If you prefer wine, try a Shiraz, Cabernet Sauvignon or Chardonnay for $5 per glass. 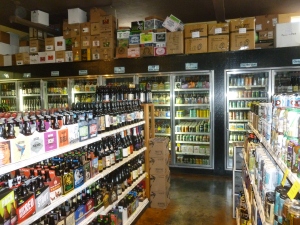 Try one of the 1,300 bottled beers from around the world.

Other changes include a new back patio and expanded covered area adjacent to the Italian Market food cart – you can bring your order into the bar or alternatively munch on the pretzels, potato chips or Sriracha cheese puffs on the Belmont menu.

Expanded back room and patio

Lisa has seen the incredible growth to what is now a $2.83 billion Oregon industry employing close to 30,000 people and she’s witnessed the rapid change – even in the name from micro-brews to craft beer.   Portland alone now has 53 breweries – more than any city on the globe.

I asked if we are at the saturation point and she replied in the negative citing the over 3,000 establishments now operating in the United States.  This may be less per capita that immediately before the commencement of Prohibition.

Lisa Morrison has earned the name Beer Goddess and her statement below validates that title:

“(Beer is) not just a beverage.  It’s our social lubricant.  Especially in Portland, it’s a thread of our community that is so important.”

And when we initially discovered that we both knew Dr. Sam Holloway, I said, “Lisa, it’s a small world,” to which she immediately responded, “No Don.  It’s a large brew pub!”

So stop by Belmont Station, have a brewski and say hello to the Beer Goddess, the first Beerchaser-of-the-Quarter in 2015.  It’s too bad she wasn’t around in 399 BC to promote her craft.  Perhaps Socrates would have decided to consume a Dead Guy Ale rather than drinking the hemlock!

Susan at the Belmont Station bar

An extensive history of rotating taps