Breckenridge – A Colorado city with great views and brews…..

We finished our twelve-day trip to Colorado last fall with a week in a Breckenridge condo, after visiting Boulder, Fort Collins and Colorado Springs.  Breckenridge, since its ski areas opened in the early 1960’s, has shed its reliance on mining and this bustling burg of about 5,000 people, is now a tourist mecca.

Breckenridge – where the skiing is superb and the beer is brewed with “altitude.”

While known primarily as a winter ski resort, it is also an inviting destination when the lifts are not running.  Hiking, cycling, fishing and, of course, since this is Thebeerchaser blog, let’s not forget, lively and interesting eateries and watering holes in which to raise a mug.

A short hike on the Iowa Hill Trail in Breckenridge

Based on multiple recommendations, our first night, we ate at Angel’s Hollow, in a quaint old house and which not only had outstanding food (Janet said the best minestrone soup she has ever had) but an interesting bar with friendly people from all over the US.

They included Joe, Paul, Shannon and Len, who were drinking beer with straight shots of Jamison’s as a chaser.  They wanted to buy us shots and to join them –  I did and Janet declined!.  Angel’s Hollow is also known for wonderful margaritas – understandably. 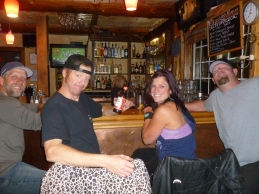 Nothing like a few shots of Jamison to break the ice……

It’s co-owned by a husband and wife.  Lee, the husband is also the cook – a good one who takes no guff from unruly patrons – possibly because after attending culinary school in New York, he cooked for the Hell’s Angels for several years.

A May 2015 Yelp comment summed up this bistro quite well:

“Amazing drinks! Killer margaritas! The music is super loud and awesome! The bartender is the most bad ass dude I’ve met in awhile and it’s like a big party in a log cabin!”

The Breckenridge commercial area is pretty compact – and not far from the slopes – so tourists are advised to refrain not only from drinking and driving, but drinking and skiing. 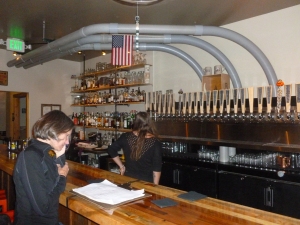 Another nice little bar – also on Main Street – Apres Handcrafted Libations – beckoned us for a nightcap and presented a lot of choices.

Instead of a cocktail, we split a New York beer – Southern Tier “Pumking” Ale – a great choice with a neat tap… 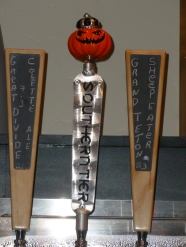 The next night we ate at Ollie’s Pub and Grub – a good brewpub with stand-out hamburgers – advertised as “The Best in Breck,” – and if not, they had to be close.  As usual, we sat at the bar which makes it easier to strike up conversation and met a friendly couple from Texas. 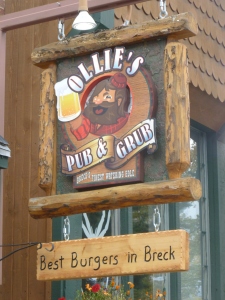 Ollies – the best burger in Breck?

A short road trip the next day took us over the pass to Vale – which seemed more effete than the amiable village of Breckenridge and returned through Dillon.  The recommendations of locals held sway and we had lunch and a beer at the Dillon Dam Brewery -opened in 1997 and now with thirteen of its own beers on tap.

It advertises itself (I’m somewhat skeptical) as “The largest brew-pub in the Colorado Rockies” – but regardless if this claim is accurate, they keep their promise of brewing “Dam Good Beer” – most notably, the award-winning Chili Lager.

The former was opened in 1980 by a “typical ski bum – with one significant difference. He had a knack for making extraordinary home brew……..Breckenridge Brewery has grown from a small 3,000-barrel-a-year brewpub (and)…we now craft well over 62,000 barrels of fresh beer annually, and we operate five brewpubs and ale houses in the state of Colorado.”

Thebeerchaser at the Breckenridge Brewery

Broken Compass Brewery was founded by some home brewers with backgrounds in chemical engineering and sustainability.  The brewpub is pretty meager (see the picture below) and ambiance is lacking but…… 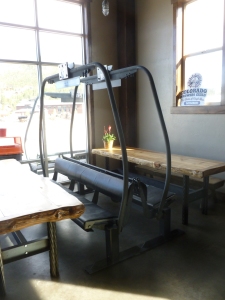 They have expanded from six to twelve beers and the reviews on the beer are good.  We met a sister and two brothers who were on a road trip from Florida to spread their mom’s ashes in the Rockies.

The last bar visited in Breck was also the most interesting and has a rich history as per the description by Dr. Thomas Noel, author of Colorado – A Liquid History and Tavern Guide to the Highest State, in his description of the Gold Pan Saloon: 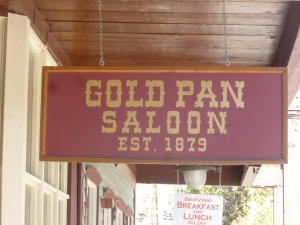 Quenching the thirst of miners, skiers and residents since Rutherford B. Hayes was President!

“In 1880, the town had eighteen saloons and three dance halls on Main Street…..The number of saloons and mines began to taper off by 1910 when Breckenridge went into total hibernation.

The town shrank to less than 300.   The drowsy decades ended with an avalanche of development triggered by the opening of the Breckenridge Ski Area…..in the early 1960’s.  By 1990, the town had grown to 1,285 nearly its mid-1880’s peak population.  A dozen new saloons opened, but none outshone the old Gold Pan, which has quenched Breckenridge’s thirst since 1879.” (emphasis supplied)

And I would suggest that although the bar with the same name on Mt. Rushmore Street in Custer, South Dakota, also has some stories to tell, the Breckenridge version has a more esteemed position in its contribution to the annals of American saloons.

While it is in a clapboard building and does have some flat screen TVs and pool tables, the authentic historical trappings in the two rooms (one for the restaurant and one for the bar) of the saloon are compelling.  And remember – it stayed open even during Prohibition.

Dr. Noel describes the classic wooden backbars in many of America’s older bars.   The Gold Pan is no exception as described on page 32 of his book: “The Brunswick-Balke-Collander Company of St. Louis made the classic altar of Bachhus with egg-and-dart trim and Ionic columns framing a huge mirror whose centerpiece is a rusty gold pan with broken clock hands.”

Inscription in the historic backbar

And perhaps the stories and conversation I heard are more contemporary then those described by Tom Noel below, but they are still engaging.

My friendly bartender told me how any such job in Breckenridge is cherished –  “We work in the off-season to buy our season lift tickets…” and how the City Council is trying to adapt to marijuana initiative: “They don’t want a recreational marijuana dispensary on Main Street, but is that hypocrisy or a contradiction given the number of bars not only on this street, but the two adjoining ones running through town.” 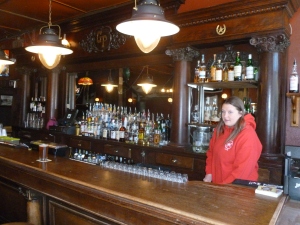 And I listened to what had to be a regular complaining to his companion about Washington politicians:  “Perhaps Obama and Congress should come out and go skiing.  Then they can see what it’s like going downhill like the rest of America.”

This compares to Dr. Noel’s personal experience in the Gold Pan in the 1970’s – his first visit:  “Before I knew it, the shaggy, huge bartender was yelling at one of our party:  ‘You calling me a liar?  I didn’t short change you, you bitch!  Here’s your money back, all of it.'”  He then kicked all Noel’s party out of the bar.

Admittedly, that’s not as pugnacious as the story he relates about a more congenial Gold Pan employee named Travis who gave the following account – and given the wonderful sagas in Dr. Noel’s book (available at Amazon and one you should acquire) it is fitting to end the narrative of our twelve days in Colorado in which we visited eighteen bars and brewpubs with one final story from the good University of Colorado professor:

“The meanest S.O.B. in here was a little guy who was part Injun.  One night I saw two rednecks hassling him.  He keep telling ’em to bug off, but they wouldn’t.  They were big guys.  Finally, he had enough.  He jumped on one of the guy’s lap, grabbed his ears and bit the tip of his nose off.  He spit it out and yelled, ‘You’re lucky I’m not hungry!'” 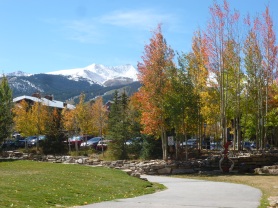 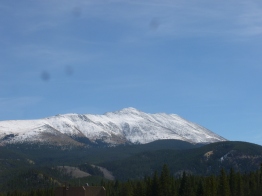