We had company on our walk in Piedmont Park!

My wife and I spent twelve wonderful days on a road trip through Georgia, North Carolina and South Carolina in May.  We stayed in Atlanta, Asheville N.C, Charleston and Savannah.  The people, history, food and beer were all memorable as were the sixteen bars and brewpubs that we visited in Thebeerchaser’s continuing journey.

We started the trip in Atlanta – staying in Midtown, where we had a fine dinner (twice!) at Max’s Wine Dive – which also had some good beer.  Their fried chicken was outstanding.

This was after a Happy Hour cocktail at the The Nook on Piedmont Park – voted “Best Patio Bar in Atlanta” for obvious reasons and a good selection with thirteen beers on tap.

And our favorite beer on the entire trip where we encountered some great breweries – especially in Asheville – was from the Sweetwater Brewery in Atlanta.  Everywhere we went in Georgia people were drinking and raving about Sweetwater 420 Extra Pale Ale.

We checked to see if we could buy it in Oregon, but they don’t distribute west of the Mississippi.  Our remedy – taking one of the bottles in the six-pack we bought, stuffing it in a tennis shoe and checking one bag on the plane so we could at least talk about it when we came home.

We also had a beer and enjoyed the ambiance of the bar right below our hotel – the Eleventh Street Pub. 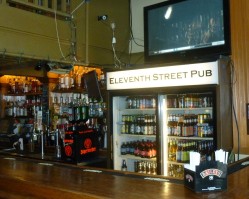 A nice little pub by the hotel 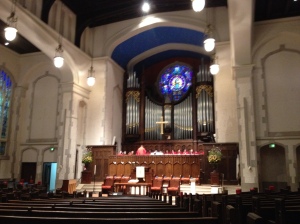 Our first Sunday started with church in the historic First Presbyterian Church of Atlanta  – a good experience and we found, as we tried to look inconspicuous in the back row, that people still dress up for church in the South!

The history in Atlanta is more compelling than the urban attractions and we visited, with awe, the Martin Luther King Center including a guided tour through his childhood house – we learned that he did everything he could to escape piano lessons….He and his wife were remarkable and their impact on America is well chronicled in this memorial.

“The King Library and Archives at the Center is the largest repository of primary source materials on Dr. Martin Luther King, Jr. and the American Civil Rights Movement in the world.” 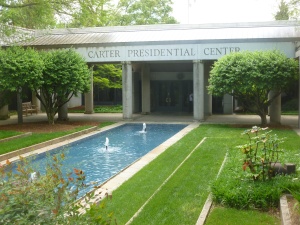 The Jimmy Carter Presidential Library and Museum was in a beautiful setting and impressive as was the Atlanta History Center.  The amazing Atlanta Cyclorama and History Museum were also worth the time:

“Visitors view the cylindrical painting from the inside, entering through an entrance in the floor. After being seated, the central cylinder rotates slowly, affording a view of the entire painting (of the Battle of Atlanta). The painting at one time was the largest oil painting in the world, and if unrolled would measure 42 feet (13 m) high by 358 feet (109 m) long.” (Wikipedia) 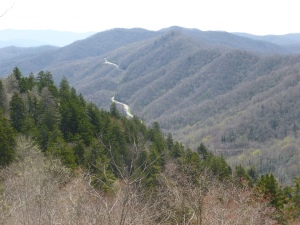 The Blue Ridge Parkway was a beautiful route to the Smoky’s, but although very scenic and after ascending to the tallest point on the Appalachian Trail at Clingman’s Dome (6,643 feet), the range seemed a bit limited compared to what we have with our 10,000 to 14,000 foot peaks in the West. 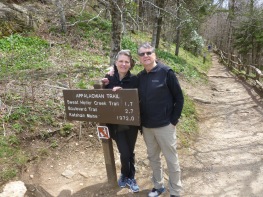 And on to “Beer City USA” – at least that’s how Asheville, North Carolina advertises itself – perhaps not realizing the fact that Portland’s 85 breweries surpasses the 13 in Asheville (not counting the New Belgium facility that will come on line later in 2015) although there are 20 others as mentioned in the “Western North Carolina Beer Guide” that lays out the Asheville Ale Trail.

Nevertheless, it is a charming and beautiful city with great beer: 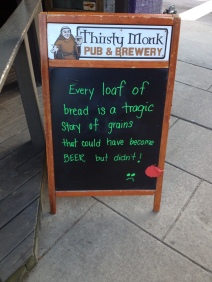 “With so many great breweries, taprooms and brewpubs, it’s easy to see why Asheville, North Carolina won the crown of “Beer City, USA” for four years in a row, handily beating out national heavyweights like Portland, Boston and San Diego in a popular nationwide survey.”

Time precluded the Ale Trail journey, but we did have a wonderful meal and great beer at the Wicked Weed Brewery (over 25 house beers on tap and fantastic burgers).

The Wicked Weed – Great food and a good selection of beers

The next evening we had a superb pizza and several of the “unfiltered, naturally carbonated and additive free beers” from the Lexington Avenue Brewery.   (The Eleanor’s Rye – Red Ale was memorable.)

The people in Asheville were fabulous.  First, we met a gentlemen named Dana Stonestreet, Chairman, President and CEO of Home Trust Bank, the fifth largest community bank headquartered in North Carolina, who saw us standing outside a restaurant.  He said “hello” and then spent no less than twenty minutes advising us about everything we should do in his city. Dana was the epitome of Southern hospitality. 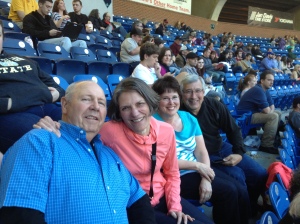 Vestal, Janet and Susan and Jeff Nopper at the Tourist game

Then we met another Southern gentlemen we will remember for a long time.  We wanted to take in a minor league game in Asheville’s impressive McCormick Field, so we saw the Single-A Asheville Tourists play the Hickory NC Crawdads on a beautiful evening.

Both parking lots were full and as we passed a VIP parking lot – fairly empty of cars – we stopped and said to the attendant, “We came from Oregon to see the Tourists play.”  At which point, Vestal Caldwell responded, “I guess that means you should park in my lot and take these discount tickets.”  So Jeff and Susan Nopper and the two of us, sat in box seats for a total of $18.

Tourists vs. Crawdads at McCormick Field

In the fourth inning, Vestal slid into the vacant seat next to me and regaled me with stories of his career in Naval Intelligence, his purchase of twenty-two acres outside Asheville in which he grows apples and then pointed out a lady sitting by the dugout.

“She was my third-grade sweetheart and owns a Bed and Breakfast and provides free lodging to three of the Tourist players, so she gets a season ticket.”

Jack of the Woods entertainment

We only had three days in Asheville, so time constraints precluded some additional visits to the charming watering holes and brewpubs.

But before leaving we enjoyed a beer and the vocal group at the Jack of the Woods Public House, including a nice chat with the owner of the pub:

“On a typical evening at Jack’s you’ll find many of the patrons gathered around the black walnut bar or at long wooden tables engaged in conversation. Others play darts or scan the papers while sipping a pint or munching on a plate of fish and chips.

When local musicians are fiddling away on Irish reels or picking some old-time mountain music in the corner, you can blink your eyes and imagine yourself in the Celtic Isles or an early American tavern.”

Asheville –  We shall return!

2 thoughts on “Thebeerchaser in the South – Part I”