In a blog post dated January 14, 2016, I included a list of the ninety-six bars, taverns and pubs outside the city of Portland that Thebeerchaser (and in many cases, my wife Janet) has visited during the last five years.   Included in that list were a number in Montana and Wyoming we hit during our road trip to Yellowstone and Grand Teton National Parks last August.

Due to other priorities (and procrastination) those were not timely reviewed and the next two posts will attempt to remedy that because Missoula, Helena and Jackson, Wyoming all had wonderful establishments with colorful people and there was majestic scenery to be described. 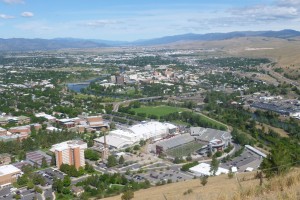 Looking down on Missoula and the University of Montana campus from Mt. Sentinel

We drove from Portland to Missoula in one long day and arrived in time to have a great burger (okay, Janet had a Cobb Salad) and brew at the Tamarack Brewery.

Missoula is a picturesque and fascinating city of about 70,000 with a rich history, a very nice campus (the University of Montana) and more interesting bars and brewpubs than we could visit in one and one-half days.

After dinner, we walked through downtown stopping at the Stockman’s Bar (“Liquor up front – poker in the rear..”) and subsequently hit the Oxford Saloon, an historic bar and one in which the bartender, Beth, reacted enthusiastically when I explained my hobby of visiting and blogging about bars.

Beth, bartender and expert on “The Ox.”

“Well, you need to buy the book, Montana Watering Holes, because I’m quoted and Joan Meltzer, the author, does a great job describing the “Ox” – Missoula’s oldest bar.” (either 1883 or 1888)   Since I had already had success using excerpts from the book “Colorado – A Liquid History and Tavern Guide to the Highest State,”  after I contacted the author, the University of Colorado’s Dr. Tom Noel, I stopped in the next book store and purchased Joan’s book as Beth had insisted.

The Ox – the oldest bar in Montana

And Joan was also gracious in responding to my e-mail request and in a subsequent phone call with her permission to quote some examples of her “(celebration of) more than fifty of the most iconic, eccentric, and entertaining saloons scattered across Montana……”

She wrote the book in the early 1980’s, when she was in her twenties, and updated it by visiting all the bars in the original volume and adding a few others in 2009. 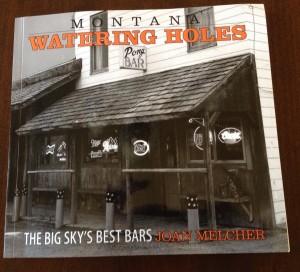 Her quest (one which I think is inspired and admirable) was to find “the perfect Montana bar.” Joan’s book is fascinating and this quote at the end of her introduction will demonstrate that those who enjoy Beerchasing will savor it:

“Today, many years removed from Prohibition, the Montana bar has retained its function as the social sanctuary of the West: a place to buy supplies, fill up the gas tank, eat dinner or end a long night of good-timing.

A place where lifelong plans and promises are made, and just as quickly broken.  A place to cry in your beer over life’s inherent injustice—before you laugh in abandonment in the glow of one too many beers.  A place to dance when the jukebox’s western tawny becomes too melancholy or too exuberant for a body’s rhythm to ignore.  More than anything a place to gather. “  (Introduction – page XXVI)

And her description of the Oxford, which includes the fact that after the bar was moved from its original to its present location in 1955, “It’s never been closed.  Open twenty-four hours.  There are no locks for its doors.”  (Page 134).  And the Ox oozes history with its dark wood floors, amazing back-bar, black and white historic photos and collection of old rifles above the bar – a museum in itself.

Not much has changed over the years in the bar aside from addition of a vast array of video poker machines in one room of the bar — oh, and the discontinuation of the once popular “brains and eggs breakfast,”.   The menu item was purportedly discontinued during the scare over mad-cow disease which swept the West about fifteen years ago although the Ox’s menu is still extensive.

And according to their website, “We have served over 200,000 orders of chicken fried steak with JJ’s special gravy since we introduced it on our menu in 1986.”  (Assuming the website has current figures, this is about 20 per day – every day for the last 29 years, according to Thebeerchaser’s calculation!)  The clientele includes, ranchers, Missoula business people, tourists and college students and the legacy of live poker games continues every night of the week.

The number of great bars in Missoula requires a longer visit, but there were a few others, most notably Charlie B’s, the idiosyncratic favorite of noted Montana crime novelist, James Crumley (he was also Beerchaser of the Month on this blog in September, 2011 – see link).   Crumley was a curmudgeon who started his crime novel, The Last Good Kiss, with what many reviewers have described as the best opening line of the genre’: 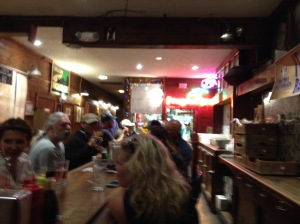 “When I finally caught up with Abraham Trahearne, he was drinking beer with an alcoholic bulldog named Fireball Roberts in a ramshackle joint just outside Sonoma, California, drinking the heart right out of a fine spring afternoon.”

The bar is to some extent beyond description except to say that notwithstanding its fabled lack of any external identification and not being listed in the phone book, it’s jammed every night of the week and known for its cheap beer, stiff drinks, young female bartenders, portraits of old (and now mostly dead) regulars and the small Dinosaur Café in the back of the bar renowned for its great Cajun food – you order it yourself.

An article from the Missoula Independent on March 6, 2008, quotes Crumley on Charlie B’s:

“’This is my home bar,’ Crumley says. ‘Home bars can change. They can move around. But when you find a home bar, you stick with it. Charlie knows what he’s doing…I like it in the afternoons. I usually try and get out before the kids come in. The kids today, I don’t know. They bump into you and don’t know, like I do, that you’re supposed to say ‘excuse me.’ I leave before they come in.’”

And talk about a contrast….after a beer at Charlie B’s, we walked a short distance down the street and had a great dinner and martini at Plonk – a wine bar and “an environment designed to engage the senses in an uncompromised celebration of the beauty of life.”

While Thebeerchaser is more comfortable in a dive-bar environment, Plonk was classy, the food was good and the gin martini  (up with olives) was superb.

One reason that we always sit at the bar in restaurants and bars while traveling is to meet people and our experience at the KettleHouse Brewery on the second day in Missoula was no exception.

Beer and conversation at the KettleHouse Brewery

We stopped in for a late afternoon beer and sat next to two women (Cynthia and Lisa) – one a retired teacher at an elite private school in Nashville,Tennessee (tuition is $18,000 per year!) and the other still working there as a PE instructor and coordinating the outdoor school.

Our conversation revealed that they were “camping” in their Airstream Trailer – pulled by a pick-up truck and fly-fishing their way across the US.

After we talked for about 30 minutes, they insisted that we come out and tour the Airstream.  Great people and typical of those you meet in a new bar on the road.

A highlight was cycling a few miles up the Clark Fork River, riding back along the river through the middle of town (on great bike paths) and then having a noon brewski at the Draught Works Brewery.

It’s a captivating little brewery opened in 2011 on the outskirts of the city. The liquor laws in Montana are very idiosyncratic as our bartender explained.  Microbreweries cannot brew more than 10,000 gallons annually if they sell beer on site and Draught Works sells all of its beer on premises.

Why should this brew-pub be limited to hours of 10 to 8 in a college town?

If beer is sold on site, the hours of operation can only be from 10:00 AM until 8:00 PM and the amount is limited to 48 ounces per person daily in “sample rooms” – a reason that we were given a ticket when we purchased our pints (and also something that I’m sure that University of Montana students are clever enough to get around).  And I thought the Oregon Liquor Control Commission rules are onerous at times.

James Crumley had a reserved seat in this bar

Now there were quite a few bars in Missoula that really looked interesting, but our time there precluded visiting until next trip.  These included the Depot Bar – another favorite of James Crumley, the Silver Dollar (an eighty-year old institution), James Bar, Flathead Lake Brewpub and others.

The University of Montana dominates Missoula – a scenic and historical university town and the UM Grizzly Football Team is legendary.

The stadium is impressive and the city supports its team with passion.  John Krakauer’s 2015 book  Missoula: Rape and the Justice System in a College Town  provides a viewpoint (disputed by many Missoulans) on how that devotion can go to far.

A recommended read on a topic which is a national issue

He chronicles some of the court trials and legal issues based on sexual assaults by members of the football team and the division in the community over the prosecution which ultimately resulted in a Department of Justice investigation.  The book is controversial but a recommended read.

On to Helena, Yellowstone National Park and the Grand Tetons.

4 thoughts on “Thebeerchaser Does Montana and Wyoming – Part 1”