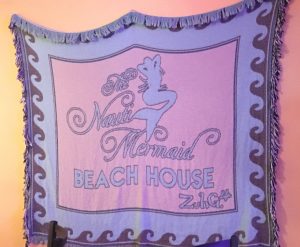 Lincoln City is a great beach community with a number of memorable bars ranging from classic dives such as the Old Oregon Saloon, the Cruise Inn and the Nauti Mermaid Bar and Bistro, to more upscale watering holes such as the Snug Harbor Bar and Grill and Road House 101 – Rusty Truck Brewery.  These were covered in several prior posts during a three-day journey on the Central Oregon Coast in which we visited fifteen establishments in three and one-half days in the coastal towns of Pacific City, Depoe Bay and Newport besides the aforementioned Lincoln City.

The original Nauti Mermaid Bar and Bistro, opened in 2011, was covered in the third post above and I was pleased to see and then visit the “new” (opened in July, 2016) Nauti Mermaid Beach House – an annex, of sorts only about one-half mile south of the original on Highway 101 – right by the D River – which is purportedly the “shortest river in the world.” 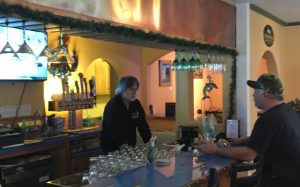 Bartender and owner, Tom Dreiske, at the Beach House

Tom Dreiske, the owner and a transplanted Californian who now lives in the Roads End section of Lincoln City, told us when we visited the Beach House on a rainy December weekend that the space, which has a great view of the beach and formerly occupied by Wine 101, was just too good a deal to pass up.  He was pleased that during the winter months he is breaking even.

And there seems to be little question that with the ocean view, a robust tap list, a nice menu, a cool sunroom, and a sand-filled patio (14 yards hauled in) with another good mountain view to the east and which will have games such as cornhole, that his business should prosper — oh that’s right — don’t forget Dave, the canine mascot who keeps customers company. 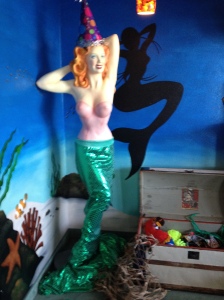 Now the original Nauti Mermaid is very “quaint” and has an interesting and idiosyncratic décor typical of any dive bar.

For example, the doors to the restroom! 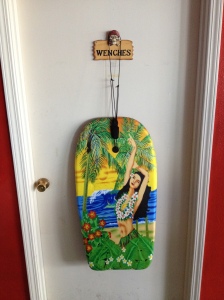 There are old 33  PM album covers hanging on the wall by the stage on what used to sit an old and valuable grand piano – a possession of the former owner who used to come in on the mornings and play classical nocturnes. 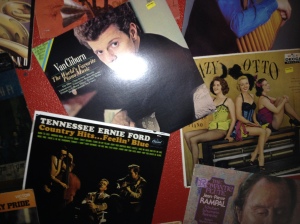 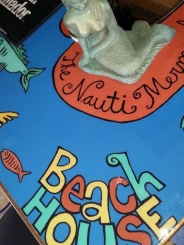 But back to The Beach House….It’s a very open and bright (when storms are not saturating the coast) and the counter tops have class, having been handcrafted by local artist and musician, Bryan Nichols who also owns the nearby Zuhg Life Surf Shop, where one can get surfing or guitar lessons and some neat custom apparel. 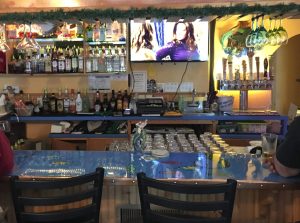 Tom was very hospitable and offered us several samples to help us choose the right beer which we picked from about ten on tap.

I had a new one for me – a Red Seal Ale (winner of multiple medals in various brew competitions) from North Coast Brewing in Fort Bragg, CA –  an interesting brewery operating since 1988 and whose flagship beer, Old Rasputin Russian Imperial Stout, has garnered its share of awards.  I would like to drink Red Seal again.  Janet tried her favorite – a Breakside IPA. 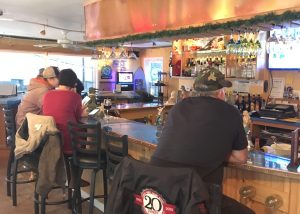 He also was very accommodating and willing to share the story of both the original Nauti Mermaid and the Beach House, besides giving me a tour and explaining his vision for the bar.

Now all of the reviews in social media are for the original bar and confined to Yelp, but one common theme was Dave, the bar’s dog – owned by Tom and who frequents  both bars.

When we first saw him, he wandered up to us in a friendly and curious manner.  We asked Tom who owned the dog and with a straight face he stated, “He’s  just a local mutt who wandered in…”  We did a double take and Tom laughed and said that Dave was his companion.

And with one minor exception, people were positive about Dave, who evidently is a Bernese.  It’s worth noting, that a majority of the Yelp reviews mentioned this well-mannered canine:

“Great pub.  Friendly bartender,  good beer,  tasty nachos and a friendly local crowd.  The bar dog was not aggressive at all, just looking for treats not pets. Overall a good experience.”  (12/28/2016)

“The bartender (and owner, I presume?) was a nice guy with a dry sense of humor and a somewhat gruff personality…… Also, he brings his dog to work with him (the pup gave me a “kiss” on the cheek in exchange for a dog treat–aww)!”   (8/2/2016)

“We have been here several times and every time is wonderful. The locals are cool. The bartender brings his really cute (super chill) pup.” (6/8/2016)

“Upon arrival we noticed the bar dog was part bernese (which is a breed we owened – sic) very aggressive and barked at several patrons plus us (out of towners) we found this to be a turn off along with the fact that the owner/Bar tender seemed to not care so good luck with that, I hope you have a strong local following!” (10/17/2015)

Now it is interesting that the reviewer above asserts that he “owens” a Bernese and that Dave was very aggressive.   Wikipedia describes this breed:  “dogs should not be “aggressive, anxious or distinctly shy”, but rather should be “good-natured”, “self-assured”, “placid towards strangers”, and “docile. “Affectionate, Faithful, Intelligent, Loyal.”

Well maybe Dave had a bad day that October, but the preponderance of the evidence for an amiable countenance, including our experience, rests with the dog.

The Beach House also has live music periodically and a good juke box.  When you’re in Lincoln City, drop by and then go up the street and visit the Nauti Mermaid Bar and Bistro, go across the street to the Cruise Inn, walk a few short blocks up 101 and have a $1.50 PBR at the Old Oregon Saloon and then take a taxi back to your hotel!

But before you leave the Nauti Mermaid Beach House say “hello” and come forth with a doggie treat for Dave.