We drove north from our first night in Wisconsin – in downtown Milwaukee – up the peninsula separating Lake Michigan and Green Bay into Door County.   What a beautiful drive – rolling farmland with historic barns, small communities and all one identifies with rural America.

And Door County – surrounded by water and with over 300 miles of shoreline has a Cape Cod-type ambiance in the heart of the Midwest.   We stayed with my sister-in-law, Pam, in Sister Bay, and toured nearby towns , the names and heritage which could be portrayed in Mark Twain’s or any novelist’s work who wrote about small-town values and culture. 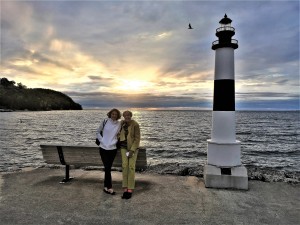 Janet and Pam at sunset in the heart of Sister Bay

Bailey’s Harbor, Turtle Bay, Egg Harbor, Fish Creek, Gill’s Rock, Sturgeon Bay, Ephraim, etc.all of which beckon vacationers who want to relax in a scenic, welcoming environment – and oh yes, one in which there are some great bars and breweries.

There are also some small wineries, but based on our limited sampling, the grapes are such that the wines tend to be pretty sweet and make an IPA a much better bet.  We visited four watering holes on our Beerchasing tour.

Door County Brewery – this establishment was recommended by multiple parties as having great beer. Located in a small building outside the wonderful village of Bailey’s Harbor (“BH is…..truly a place where everyone knows your name—and then some. We like cool breezes, water sports and parades with a drumming rabbit who thinks he’s a chicken. And beer.  Lots of beer!”) 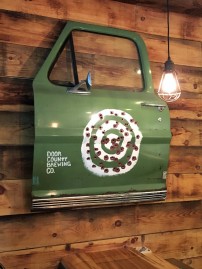 The enterprise was established in 2012 by four family members.  Brady, the bartender told us that the brewery specializes in Belgian beers although they have some other nice options available with the ten on tap.  We tried their Pallet Jack Cruiser which is a good Session IPA.

Kyle, the brewer, was in and we had a nice conversation and learned that they will expand this summer to new quarters in the heart of Bailey’s Harbor.  We felt like we were regulars and met a wonderful guy named Buzz – a high school coach who regularly vacations in Door County. 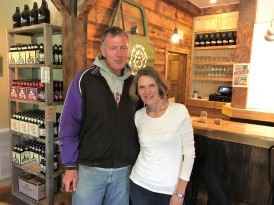 Janet with our new friend and coach, Buzz.

Besides having a great logo, the attitude reflected on their website is evidence of why they have won the hearts of their community:

We value family, friendships and community above all else and create one-of-a-kind craft beers to bring these all together…..The root of our brand is the authentic story of a small community who cares about the passion, hard work and significance of every day.….So welcome. We are glad you came and hope that you enjoy our community of friends, family and beers. Now let’s have some fun!”

Now in expanded space although this was quaint….

They moved to a larger building on July1st which will have a nice beer garden and more room for the crowds attending their Saturday night entertainment. Typical of the reviews was this one on Yelp – a couple visiting a little over a month after we did:

“We stopped in during a walk……The staff was very friendly.  A great atmosphere and vibe makes the patrons happy.  Might have something to do with excellent, easy flowing craft beer also. “ 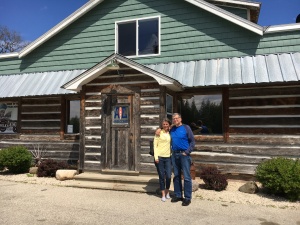 What better place for a dive bar???

AC Tap – this was my personal favorite and a great dive bar.  Half way between Sister Bay and Bailey’s Harbor in the middle of some farmland on Hgwy 57, the setting of this bar drew me like a magnet and we were not disappointed.

Now one typically does not hit a dive for the food – it’s the cheap beer, the signs on the wall, the crusty regulars and pool (darts also at AC Tap).

Well, AC Tap has all of these and food that could shame some of the established bistros – in a kitchen that could fit in a closet.   Because of limited time, we did not have a chance to partake of the food, but let’s look at the reviews starting with this summary from a 9/9/15 Yelp reviewer:

“The Tap is an amazing place because they serve food all day everyday until bar close! The kitchen is always open until last call and the Tap does bar food the right way. They have a two-page menu along with a homemade special and soup each day. Mondays they do 50 cent wings and a beer special.

Tuesdays they do homemade sushi rolls. In the winter, Thursday nights are usually all you can eat homemade spaghetti. Friday of course they have fish fry specials– perch or shrimp (sometimes lawyer or blue gill) and Sunday nights they do 1/4 baked chicken and dumplings.”

And almost every review raved about a different food item:

“……you can’t go wrong with anything on their menu (and) great wimpy burgers,” “a juicy hamburger and delicious homemade French fries,” “tastiest fried perch ever,” “The fish and chips were good, the fish cakes were great,” “Best bar food around.”

There was a friendly group of guys who the bartender said were visitors from Illinois on a male-bonding golf trip who were totally immersed in a dice game which I later found out after a little research, is a staple at Wisconsin Bars – “Shake of the Day.”  No, it’s not an ice cream drink, but a fun opportunity to slam a cup with five dice down on the bar and take a chance on either winning a free drink or having to buy the entire bar a drink.  The following description is apt: 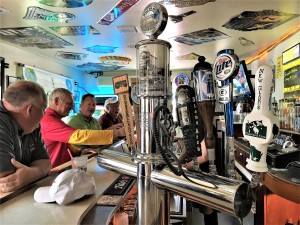 Who buys the drinks in Shake of the Day?

“This game can get pricey. The loser has to buy a round of shots for everyone playing, and if any player gets five aces, they’re buying a round for the bar. Them’s the rules…

..Of course, the rules tend to shift slightly from bar to bar. But one thing remains consistent — when the bartender loses, the bar buys all. It’s a big part of why people play; the odds of scoring a free drink are pretty high.” (On Milwaukee.com 2/12/09 by Julie Lawrence)

About the only complaints about AC Tap was that it was cash only, but get a clue.  If you cannot afford to throw down a twenty for several $2 PBRs (they have five beers on tap) and your dinner plus a nice tip for the bartender, you shouldn’t be frequenting dive bars.

By the way, the guys from Illinois, who had been there for quite awhile, left and said to the bartender, “We’ll be back in 90 minutes.  Keep the tab open.”   She did without hesitation.    We will definitely be back to AC Tap the next time we are in Door County – and for sure on a Wednesday night when we can taste what our bartender described as the owners personal  sauce he cooks for spaghetti night:  “Thick, spicey meat sauce with mushrooms.”

And the staff and owners are very nice people.

Coyote Road House – I loved the name of this watering hole on the shore of Kangaroo Lake on County Road E. a few miles outside Baily’s Harbor.   (We should have asked how the lake got its name….)  It was another quaint building and more of a neighborhood-type establishment than a dive bar:

“We offer one of those everybody-knows-your-name atmospheres. Friendly service and tasty twists on traditional fare will win you over inside.

We offer over 30 different bottled beer and about 10 on tap, from Guinness to Fat Tire, and a martini is not an unusual order here. If you like onion rings, check out our ‘heaping loaf’ of thin, delicately french-fried strands that practically melt in your mouth.” 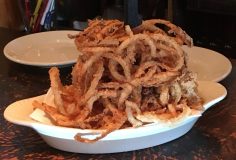 Their claim on the onion rings is accurate and unfortunately, we did not get a chance to taste their specialty – the Kanga Reuben, which has corned beef cooked for six hours and the following mouth-watering ingredients:

2 to 4 Slices of Swiss cheese,

And I celebrated our visit with a rare Hamms on tap while Janet and Pam had a Summer Shandy from Jacob Leinenkugal Brewing.  The Coyote has a great patio adjacent to the lake with a volleyball court and would be a great place to hang out any afternoon.

The view from the patio

Cornerstone Pub – our final venue in Door County was this neighborhood-type bar right in the heart of Bailey’s Harbor on the shore of Lake Michigan, which also gave Janet a chance to dunk her feet in this famous body of water for the first time. 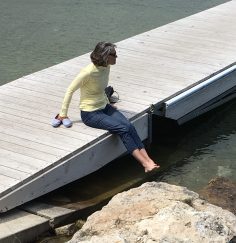 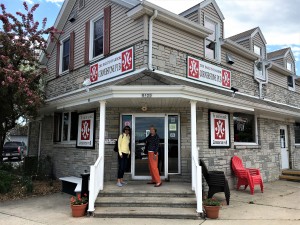 The Cornerstone in Baileys Harbor

A nice selection of beer included Spotted Cow a cloudy farmhouse ale from New Glarus Brewing which is only sold in Wisconsin according to Matt our bartender – a nice guy.   Reviews of this place are good as typified by this 2/27/17 Yelp submission:

And while you are in Door County, you have to experience a fish fry, for which almost every bar or restaurant takes pride and asserts that theirs is the best.   People liked the Cornerstone’s: 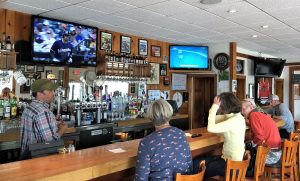 “Perch on the porch – look at Lake Michigan.” – “Man oh man… tonight I had the Whitefish Basket and it was great.  I never saw so much of the fish I love on one order.”

“There were several fish fry options to choose from, including perch, haddock, whitefish, shrimp, or the Door County Fry which include a piece of perch, haddock, and whitefish…..The fish was all cooked perfectly and appropriately seasoned. “

And by the way, you should also add fried cheese curds to your list of consumables – maybe not the same night as the fish fry, but while you’re in the Badger State. 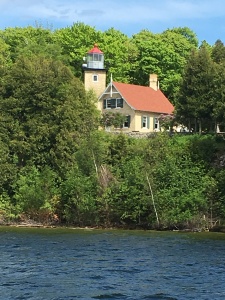 The next day it was a hike in Peninsula State Park to work off the beer and onion rings – a nice jaunt through wooded splendor, a stop at Eagle Bluff Lighthouse and then a meal at the “famous”  Al Jonhson’s Swedish Restaurant in downtown Sister Bay, which was okay but when we return will be far behind AC Tap on our preferred list.

As we were walking down the main street of Sister Bay to the restaurant, we turned a corner and there was former Portland Trailblazer, Joe Pryzbylla and his wife walking by.  Pam is a season ticket holder and Blazer Ambassador and she and I immediately recognized him (hard to miss at 7 feet one inch).   She said “Hi” and thanked him for being the enforcer during his seven seasons with the Blazers.

The one thing that was interesting about Earl Anderson’s  was their sod roof, which had a goat chomping on it.  (There was an explanation of how they get the creatures up there in the restaurant.) 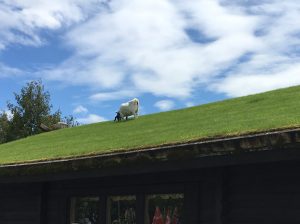 Our week in Door County was superb and we headed back for a final night in Milwaukee before returned to O’Hare for the flight home.  Next up –“Beerchasing in Wisconsin – Part III.”

Americana at its best…