Father Martin Grassel, O.S.B., is a monk who lives at Mount Angel Abbey, his residence for the last eighteen years.   He is the Abbey’s Procurator – the equivalent of the Chief Financial Officer and has responsibilities for technology, human resources, food services, facilities and financial management of the monastery and seminary located on a beautiful hilltop setting about twelve miles from Salem, Oregon.

But this man of faith with a quiet charisma has additional responsibilities which occupy his day – he is the lead brewer for the Benedictine Brewery, a small five-barrel operation starting up at the Abbey and for which there are exciting plans In the near future (see below). 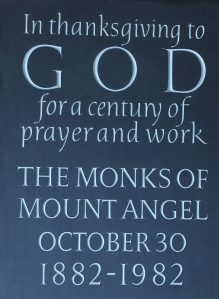 The monks at  Mount Angel start their day with a 5:20 A.M. prayer service – one of six they attend throughout the day.  But Father Martin typically awakens between 2:00 and 3:00 A.M.

The monastery was founded in 1882 and its seminary in 1889.   Mount Angel is the oldest and largest seminary west of the Mississippi and the only such institution to have both a college and graduate school with a 2017 graduating class of 62.

On this day, Father Martin is checking on his latest batch of English Pale Ale.  He checks the fermentation temperature and carbonation level to ensure the quality he demands and measures the specific gravity of the wort (or finished beer) with a hydrometer, while also making sure the fittings and hoses of the brewing equipment in one of the Abbey buildings are in good order.

The attention to detail that yields a consistent and high quality beer and his appreciation for math and science are the same attributes that made this 1985 Computer Science graduate from the University of North Dakota, a skilled software developer for Honeywell Corporation in Phoenix when he was in his twenties.  Instead of technical brewery metrics, he was then working with flow charts, data modeling, embedded systems programming and gap analysis.

Father Martin is this blog’s second 2017 Beerchaser-of-the Quarter and the “honor” is richly deserved.  He joins the “elite”  list started on this blog five years ago which now includes writers, military heroes, academicians and even the crew of the USS Constitution for their “legendary” war cruise in 1798.

Although this is a blog about bars and beer, a number of these individuals have nothing to do with my favorite beverage – they are just interesting individuals who have made worthwhile contributions to society and have a good story which should be told.  Father Martin fits both categories. 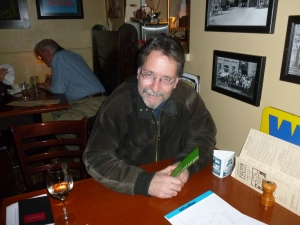 The late Brian Doyle at the Fulton Pub

Past recipients include authors such as Portland’s own Brian Doyle (Mink River and The Plover), Princeton Professor Emeritus, Dr. Harry Frankfurt (On Bullshit), athletes such as former All-coast and then NFL tackle, Craig “The Dude” Hanneman and Viet Nam veterans and heroes, Jud Blakely, Doug Bomarito and Steve Lawrence.

(To see the narratives for this distinguished group, go up to the blog header and click on the tab entitled “Beerchaser-of -the-Month or Quarter.”)

The Chapel at the Abbey

Father Martin comes from a North Dakota family of four-children that was not a church-attending group.  He became involved in his parish in Phoenix after college graduation.   Although he tried to ignore the inclination, the divine pull to the ministry persisted – he considers Psalm Sunday in 1992 as his “faith anniversary,” and he enrolled at the Mt. Angel Seminary in 1995.

His intent was to return to Phoenix once he completed his formation for the priesthood.  That plan changed, however.  During his time in the seminary he felt attracted to the monastery.  “Once I stepped across the threshold at Mount Angel, I knew I was home,” says the mild mannered and friendly monk who made his final vows in 2003 and was ordained as a priest the next year.

Home……looking out over the beautiful countryside from the Abbey grounds

So what piqued his interest in beer and what’s in store for the Benedictine Brewery in the future?

“I was not a fan of beer in college or afterwards,” says Father Martin.  He did not drink soda or wine either.

The monks occasionally have refreshments and appetizers before the main meal) and at a 2006 Haustus gathering of the monks (Haustus comes from the Latin verb meaning “to draw up” or “drink.” ) he tried Deschutes Black Butte Porter.  He liked it and later acquired a taste for other Deschutes Brewery beers.

He took an interest in the chemistry and production of beer.   “Beer stuck in my mind.  I’m an engineer.  What goes into making good beer and do I have the skills to accomplish that?”

After all, brewing is a tradition with monks that goes back to eighth century in Europe:

The Benedictine saints Bonifatius, Gregorius the Great, Adelbertus of Egmond and priest Jeroen van Noordwijk (Circa 1529-30)

“….when local water supplies were rife with disease, monks brewed beer as a way to sanitize the water and also produce a libation to serve guests who sought refuge….Beer was an important part of their diets, particularly because it could be consumed as a source of nourishment during Lenten feasts.”  (Catholic Sentinel 2/21/14)

There was no thought of “home” brewing, or I guess we should say “Abbey brewing.”  Then about five years ago, a friend of the Abbey offered to donate some beer equipment to the monks to which the initial answer was “No thanks.” 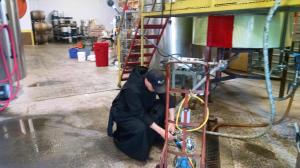 But after some reconsideration, the donated beer equipment became Father Martin’s experiment.   He read the book, How to Brew:  Everything You Need to Know to Brew Beer Right the First Time, and made his first batch in the kitchen of a friend’s house.

He started brewing at the Abbey and there were many mistakes – “Once the hoses blew off the chiller and there was beer spraying all over the room.”  However, he persevered and made a batch of Pale Ale and “The monks liked it!”

In his role as Procurator, Father Martin and the leaders of the Abbey had been contemplating additional revenue sources to supplement the Abbey’s income.  A tree farm, press and saw mill which had been part of the Abbey’s revenue stream were all declining or gone.  And there had been some, albeit not unanimous prior interest by the monks in furthering the monastic tradition of brewing.

After all, hops have been grown on the  Abbey owned acreage adjacent to the monastery since the 1880s.   A long list of potential revenue sources was developed to present during a community meeting.  Father Martin’s new hobby was last on the list.  “That was one thing I was sure would not fly,” Father Martin said.  (Catholic Sentinel – 2/21/2014)

Soon afterward, a stainless steel ten-barrel system was donated to the Abbey and the Benedictine Brewery became a reality with Father Martin as the lead brewer.  Initially, much of the brewing was done through contracts with Seven Brides and Upright Breweries with assistance from the Oregon State University Fermentation Science Program.   Father Martin was impressed and pleased with the collegiality of the brewing community.

Consistent with his education and training, Father Martin employs the scientific approach to brewing which is necessary to have the consistency for producing quality beer.

He remembers his early days at seminary when the students critiqued their colleagues’ sermons and he stated, “Beer is like learning to preach.  You either like a homily or you don’t.   What about the beer do you like and why?  Make that determination and then pay attention to what you like.”

Two bottled beers (Black Habit – dark and St. Benedict – light) were developed and tested and have become popular and garnered good reviews from sales in the Mount Angel book store. The Mt. Angel Octoberfest requested Black Habit, where it has sold out the last two years.

The Benedictine Brewery and Taproom seating about fifty will open in early 2018.  It will be located adjacent to the Abbey next to the hop fields and be the site of regular events involving the Mt. Angel community and those who travel to the Abbey to visit the beautiful grounds on which the seminary is located.

The Brewery’s motto is appropriate – “Taste and Believe.”  Father Martin reflects, “This started as a revenue project, but it has become an evangelization project……..(It) has been inspired by God.”  (Catholic Sentinel) 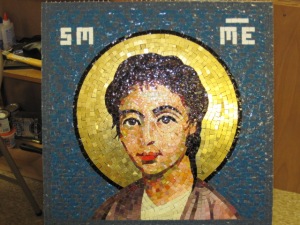 Don’t be surprised to see some home-grown artwork displayed in the taproom.  This man of many talents has another avocation — mosaic work.  He was inspired by the mosaics he found in Italian churches when he studied in Rome, and now he enjoys the detailed work required.

Thirty mosaics have been produced by the Procurator and a number have been sold in the Abbey book store and they also decorate Father Martin’s office.  Those you see here are two of his favorites.

Cecelia – a companion of fourteen years

And if you see Father Martin walking the Abbey grounds, you might also notice his companion of fourteen years – his cat, Cecelia:

“There are a lot of feral cats in Rome and I took comfort feeding some of them.  I was the only one they would approach.  Feral or abandoned cats roam our grounds, too, one of which was Cecelia.  I started feeding her and she adopted me.”

I was privileged recently, to hear Father Martin make a presentation on Benedictine Spirituality – essentially analyzing the concepts of prayer and asceticism – a disciplined effort to live for God.   The purpose of humanity is to seek God and what sets the monk apart is seeking the vision of God in this life rather than waiting until heaven.

The training and lifestyle of monks is to promote sanctification – reading and meditation inspires a personal dialogue with God and then contemplation, which helps one discern a lot about himself and who God is.  Ascetic practices include celibacy, work, personal poverty and moderation in speech, eating and sleep.

His lecture evidenced his great dry sense of humor.  “Some observing the Liturgy of the Hours may conclude, ‘This is just a bunch of guys in funny robes with mediocre voices trying to be a choir,’ but it’s truly the body of Christ glorifying God.”

I am pleased and honored to be a member of the Benedictine Brewery Advisory Committee and look forward to the opening of the Brewery and tap room.   (The other committee members, besides Father Martin and me, are Stephen Zimmer – chair, John Limb, Les Fahey, and Chris Brown and Jodi Kilcup of the Abbey staff as ex-officio members).

As our newest Beerchaser-of-the-Quarter so aptly states, “The Brewery has inspired us.  God wants us to use the gifts he has given.” 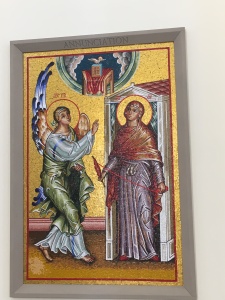 A tapestry at the Abbey

Stay tuned for updates on this project and if you want to try Black Habit (or buy a great looking t-shirt) contact the Mount Angel Abbey bookstore.  Or come and visit the Abbey, which has a marvelous museum and library besides being located in a beautiful and idyllic setting.