In the last two Beerchaser posts, I have provided background on the “World Famous” Dirty Shame Saloon in Yaak, Montana and tried to convey the incredible background and character of its owner, John Runkle, (he also owns the Yaak River Lodge about a mile and one-half down the road.)

While I could easily fill several more posts on the most interesting of the 350 bars and breweries I have visited and reviewed during the last eight years, I will conclude with this and one final shorter post to wrap up my observations.   If you want more, you will have to make the trip to NW Montana on your own – a journey strongly recommended by Thebeerchaser.

Now don’t get the wrong idea from the previous and following stories, the Shame is not exactly a family-oriented establishment and may at times be raucous.

The “Dirty” in the name of the watering hole, however, describes some of the old slats in the floor or the occasional martini ordered by a more cosmopolitan customer who wants some olive juice added to his gin……..It is not a strip club or a place where debauchery pervades the atmosphere – at least most of the time………

As described by Joan Melcher in her first book Watering Hole –  A User’s Guide to Montana Bars written in 1983.

“The Dirty Shame is the fresh, sharp smell of pine, and the dank odor of dirt-laden, beer splashed floors, wild nights of revelry and mornings of shared pain.”

A number of stories of the Dirty Shame are centered on guns.   This is not unusual in rural Montana.  In fact, in a subsequent post on my Montana road trip I will relate the story told to me by Tom Davis, the eighty-three year old owner of the Wise River Club, about the murder that took place in the rest room of his establishment.

Part of the Montana culture…..

Author Melcher also relates the story told to her on her first visit about a Dirty Shame neighbor, named Jimmie, who some years back lived in a trailer adjacent to the saloon.

Based on the disruption to his property from a number of the free-grazing herd of cattle, he told people in the Shame, “I’m getting damned tired of those cows rubbing on my trailer and walking home drunk every night through all that shit.” 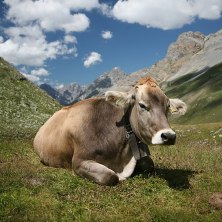 Stay away from Jimmies trailer…..

After warning the cattle’s owner to keep them out of his yard, he finally “lost it” when he was playing pool at the Shame one night and a regular told him the cattle were in his yard again.

The intrepid Jimmie without hesitation handed the guy his pool stick and promptly shot seven cows in front of the bar – the carcasses ended up laying in the middle of the Yaak River Road.

He then, “walked back into the bar and shot the four ball into the corner pocket.”   Jimmie was arrested, jailed and purportedly later released after paying a $250 fine after protests from residents of Yaak about his incarceration. (Page 89 – Watering Hole)

The AR-15 Incident at the Dirty Shame

And John Runkle in our first conversation three years ago, talked about digging bullets out of the walls after he bought the bar – from the days when it was a hard-core biker bar.   When I told him in May that I was planning to come to Yaak the next month, he also sent me the following link to a story in the Daily Missoulian entitled:   “Troy Man Charged Following Saturday Night Incident at Yaak’s Dirty Shame Saloon.

“Don, you will see an article where a guy went nuts in the Dirty Shame with an AR-15 and you will also see the video of me bear spraying him and his brother trying to fight their way back into the bar and another video embedded in that article showing him running around the parking lot trying to shoot me through the window and then almost shooting his brother in the head.

It was a crazy night. The Dirty Shame is truly still the Wild Wild West.”

The response to bear spray in the face….

I showed some friends that article and they advised me to install a gun rack on my Prius for the Montana road trip.

While I was in Yaak and asking him some additional questions about that incident, he told me that the bar was locked down while the shooter was outside in the back of the bar in his trench and the deputies were looking for him.

One very elderly man who was 95 years old was there with his son who was in his sixties.  The son told his dad that they had to stay in the bar because there was a guy outside trying to kill someone.

The father got a big grin on his face and stated, “This is the same old shit that made this a great bar in the old days.”  His son agreed that only at the Dirty Shame would such an incident be considered good publicity.

In the 2017 incident above, no one involved was killed or injured; however, that was not the case with a young couple – strangers – who walked into the Shame on Martin Luther King Day two years ago.  John said, “Both the woman and the man seemed pretty nervous and were not friendly.   They just shrugged when a regular asked them what they were doing in Yaak.”

On television, the next day was a story about a murder committed at Milepost 48 of the Yaak River Road (The Dirty Shame is at Milepost 29).   A woman and her boy friend allegedly shot and killed the woman’s husband and after dumping his body by the Yaak River, escaped in his car.   They were considered fugitives and law enforcement throughout the state was looking for them.

John remarked to his bartender, “Doesn’t that look like the couple who ordered the double shots here yesterday?”

The staff agreed so the next day he called the sheriff which brought a slew of deputies to investigate. The couple were later apprehended and the woman, Sarah Carpenter, was convicted of murder.

The call to the sheriff from John Runkle and the video of the couple at the Shame helped in the prosecution.    John was quoted in this article from the Bonners Ferry Herald as saying:

This article entitled, “Guilty Verdict in Yaak Murder Trial” from the Western News tells the story including the result of the trial and the sordid details.

You missed 2019, but start planning for next Labor Day

Before regaling you with some more Dirty Shame stories, let’s review another one of the events in Yaak for which the Shame is the center of attraction.   In the last post, you read about the Sasquatch Festival and the Adult Easter Egg Hunt.

John’s truck in the Lodge driveway a few years ago.

The Crawfish Festival takes place on Labor Day weekend as a last fling since John states, “There’s pretty much nothing to do in Yaak during the winter.”

(This year there were four feet of snow on the first weekend of the fall in parts of Northern Montana with kids even getting a rare snow day off at school.) The Daily Interlake

“Ok everybody. The Hollywood Knockouts will be returning to the Dirty Shame Saloon on Friday afternoon, August 30th to kick off the Crawfish Festival. For those who missed the show last year, these girls are professional cream wrestlers and they put on one hell of a show!!

That means you gotta be here Friday afternoon and evening to see it. You won’t be disappointed. FEMALE CREAM WRESTLING at it’s finest, only at the Dirty Shame Saloon!!!” 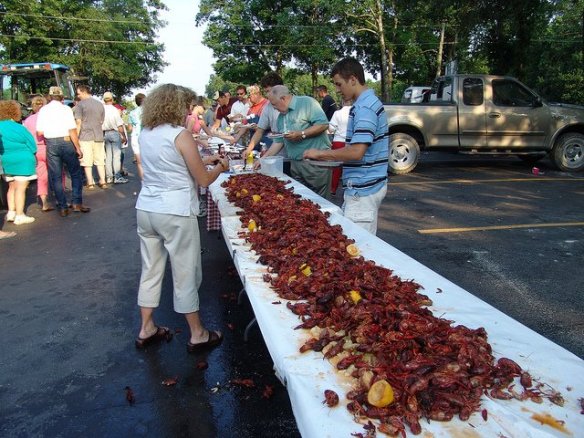 Besides outstanding and plentiful food, this year there was a mechanical bull, a gigantic inflatable gorilla (some maintain that it was actually a Sasquatch…) and some good music by multiple bands.

And don’t forget the ceremonial leg shaving.   I might add that I had not heard about symbolic leg shaving since I read Oregon’s Olympic Gold Medalist, Don Shollander’s autobiography years ago.   He talked about how competitive swimmers would shave their legs to mentally psyche them up for the meet.

Now I’m not positive that the leg shaving in the picture below was in preparation for the Big Foot Run at the Sasquatch Festival or for an event at the Crawfish Festival, but as you can see, it’s part of the culture at the Dirty Shame.

And of course, John had another great story about a past Crawfish Festival where some young women in the spirit of the event were having the guys in the Dirty Shame autograph their breasts with a sharpie.   Someone had called the sheriff and reported that their were some underage drinkers at the bar.

According to John, the Sheriff and one of his deputies – a big 6 foot 6 guy – walked in to check ID’s. The deputy took a few steps into the bar and one of the girls came up to him with the writing instrument.  John stated, “He turned beet red, did an about face and walked out to his patrol car.”

Displayed prominently in a framed display behind the bar is what John calls “the crack pillow,” which you can see in the picture below and, of course, brought to mind another story.

Two hunting seasons ago (that’s how one keeps track in Yaak…) a young woman who looked like she had been through the wringer (and was obviously high on some substance) came into the bar wearing camouflage gear.

“You never know when you’re going to need firewood…..”

She was carrying a hatchet and she locked eyes with the bartender and laid the instrument on the bar stating, “You never know when you are going to need firewood…”

She then repaired to the ladies room at the bar and was there for an extended period. Since Yaak is at an elevation of 2,986, they figured she was not trying to gain solo membership to the “Mile High Club.”   She eventally came back out front soaking wet – she’d taken a “shower.”

She ordered a Mike’s Lemonade, but didn’t have any money and offered the pillow if John would give her the drink.   The “lady” then talked a young man into playing pool for unspecified benefits – he won and she got her coat on and proceeded to leave while asking the young man, “Are you coming?”

He drained his beer and walked out with her and like the couple indicted for murder, “They were never seen at the Dirty Shame again,” although the “crack pillow” occupies a permanent and prominent place of honor at the center of the back bar.

Well, I had intended this to be the last of three posts on the Dirty Shame, but it is already too long and there is a bit more to relate before I close out the story of this incredible watering hole. Stay tuned to find out why this saloon and its crew and regulars are a treasure to the legacy of historic watering holes. 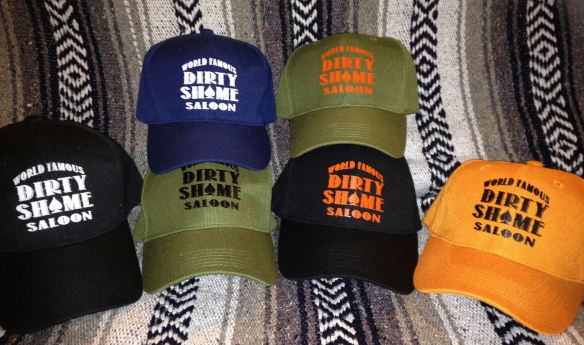