The excellent ranger-guided tour at the Cliff Palace in Mesa Verde National Park. (see below)

In September, we flew to Albuquerque for an nine-day trip through the Southwest.   We hit twelve Beerchasing establishments in Santa Fe and Pueblo, Colorado besides Albuquerque and visited two National Parks (Mesa Verde and Great Sand Dunes), the Rio Grande Gorge Bridge in New Mexico, the Georgia O’Keefe Museum in Santa Fe, a number of impressive chapels and cathedrals, even stayed at an organic farm one night and attended a climate change demonstration on September 20 during the Global Week for the Future. 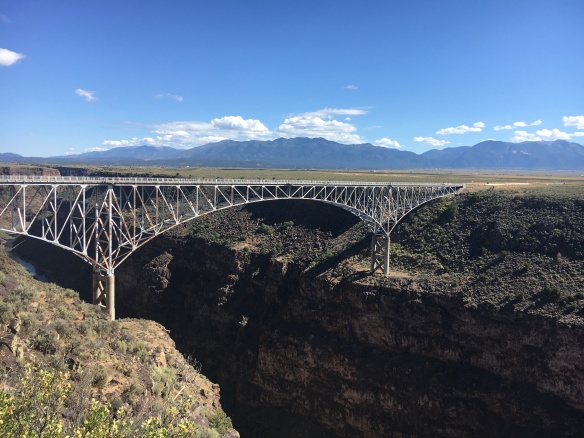 From a Beerchasing standpoint, the most interesting and impressive part of the journey was the one and one-half days in Pueblo where there were three good breweries.  But the highlight was the collection of four historic dive bars – some of the most iconic watering holes visited in the eight years of Beerchasing.   Those bars deserve more pictures and narrative and will be the topic of two future posts of Thebeerchaser blog. 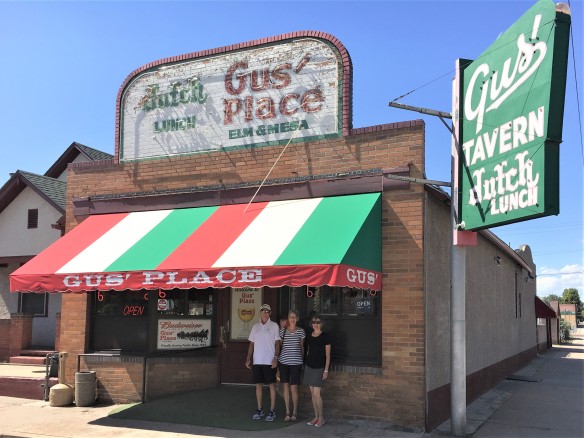 John and Barb Senger and Janet at Gus’ Tavern in Pueblo

Santa Fe – We flew into Alburquerque at night and drove to Santa Fe where the desk clerk at our hotel responded to our inquiry with a recommendation for Second Street Brewery – an enterprise that celebrated its 22nd anniversary this year and has expanded to three locations – all serving good food and with some excellent barrel-aged beer.

It turned out to be a stellar recommendation – we went to the original location on Second Street and met Ernie Bob – the most friendly and gregarious server we  encountered on the trip.

Besides impressive beer, we had an excellent meal and enjoyed a long chat with Ernie Bob about his history – and the origination of his moniker. 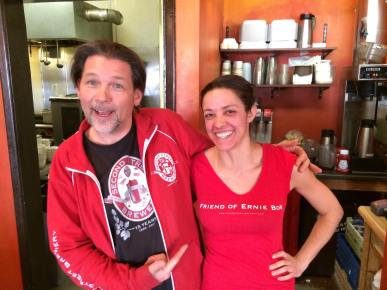 One of the many “Friends of Ernie Bob”…

And you can see that Ernie Bob’s reputation as an outstanding representative of his brewery transcends our visit by the t-shirt the woman is wearing in the picture below (“Friend of Ernie Bob”).

When he introduced himself as Ernie Bob, I then asked him if he was from the South based on the “handle.”  The conversation went like this:

BC: “With that name, were you raised in the South?”

EB: “No, I was actually born in Michigan and have lived here since the ’80’s. My given name is Robert.”

BC: “We’re drinking beer and eating. We have time and if you do, we want to hear it.”

A few of the numerous beer awards

EB: “I started working at Second Street twenty-two years ago when it opened.   There were three Roberts who worked as servers then. There was a lot of confusion on whose orders were whose and in communicating so our manager said that we had to go by different labels.”

BC: “That’s understandable, but how did you get Ernie Bob?”

EB: “Well, I was the most junior guy and the first guy said I’m sticking with Bob. The next guy then said, well, I like Robert but will shorten it to Bert since that’s easier. I had always been a fan of Sesame Street, so I said, ‘If there’s going to be a Bert, there needs to be an Ernie.’   And it quickly became Ernie Bob.”

Ernie on the left has a legacy in Sanfa Fe!

Ernie Bob recommended the Second Street IPA – strong, malty and dry-hopped – which was one of the five beers on tap at Second Street.

We then had an excellent meal (Janet – Fish and Chips) and (Don – 1/3 pound Buffalo Patty Melt) and we left thinking,  “What a great start to our trip to the Southwest.”

Cathedrals and Chapels in Santa Fe

And we spent the next day visiting a beautiful chapel, a cathedral and an historic mission – all in the central part of Santa Fe.

The first was the beautiful Loretto Chapel – famous for The Miraculous Staircase – an impressive and memorable structure – “….has two complete 360 degree turns with no center pole for structural support.  The entire weight of the staircase rests on the bottom stair.”

It was built by an unknown carpenter who disappeared after he completed it and never asked for payment.  The chapel was built in 1873.

The Miraculous Staircase in the Loretto Chapel

The Cathedral Basilica of Saint Francis of Assisi is also known as Saint Francis Cathedral and is a “working” Roman Catholic Church, built between 1869 and 1886.  Another example of beautiful carvings and stonework.

We started taking in these edifices in Europe and the three in Santa Fe rivaled some of those we saw on that trip.

And although it did not evidence the architectural grandeur of the two above, from an historical perspective the San Miguel Mission – a Spanish colonial mission church – is considered to be the oldest church in the continental US – built in the first quarter of the 17th century.

It has survived damage  incurred during revolts and warfare and  has been repaired and rebuilt, but the historic preservation is remarkable.  Its original adobe walls are still largely intact

The altar at the mission

Now I know that some of the followers of this blog, may ask, “What does this have to do with beer, bars and breweries?” It is healthy, however,monk to recognize and pay tribute to the divine inspiration that promoted early beer production and the legacy of the monks who were some of the early brewers dating back to the sixth century…..

Besides, one needs some culture and appreciation of the natural beauty of the US to fully enjoy your brewski at the end of a long day!  And there is a lot of material on actual Beerchasing in these posts to come.

One of the skyscrapers in the Georgia O’ Keeffe collection

The Georgia O’Keeffe Museum was also a highlight and the legacy and images of this remarkable artist in Santa Fe surprised me as I reluctantly, but fortunately tagged along with Janet.

This encounter with creative artistry, along with the impact of the architecture and décor of the religious structures, made Thebeerchaser forget – at least for awhile – the storied history of some of the Southwest’s dive bars awaiting us in the next few days…..

Well, since we were walking right by the Blue Corn Cafe after the museum tour, we stopped for one of their own five beers on tap and what were outstanding nachos.  They are known for great Southwestern food.

Janet had the Gatekeeper IPA and I downed a pint of the Atomic Blonde Lager.  Blue Corn Brewery opened in 1997 and asserts that it is “….one of the New Mexi o’s first breweries.”

Our friendly server made our day when we asked him to take our photo and he remarked, “What a cute couple!!??” 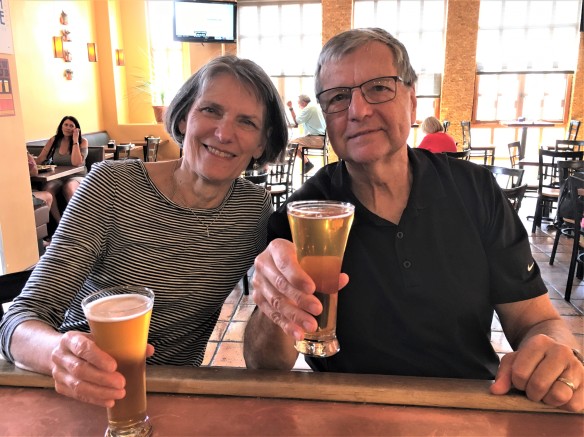 Cute??? How about “distinguished” or “urbane?”

Since this is a blog about bars and breweries, I won’t go into detail about our visits to Mesa Verde and Grand Sand Dunes , but the former is one of the most memorable of the many National Parks we have visited.

“With more than 5,000 sites, including 600 cliff dwellings, it is the largest archaeological preserve in the United States.  The Cliff Palace (the one we visited) is thought to be the largest cliff dwelling in North America.”  Wikipedia

By the way, the Mesa Verde Park Lodge where we stayed also had an outstanding gin martini.

Now the panorama of the Dunes from the time they are visible on the horizon to right in front of them is magnificent.

We decided against hiking up them (or “boarding” down them – a rental option) because of the expansive dunes in Oregon’s Honeyman State Park – right in our own backyard…. – near Florence on the Oregon Coast. 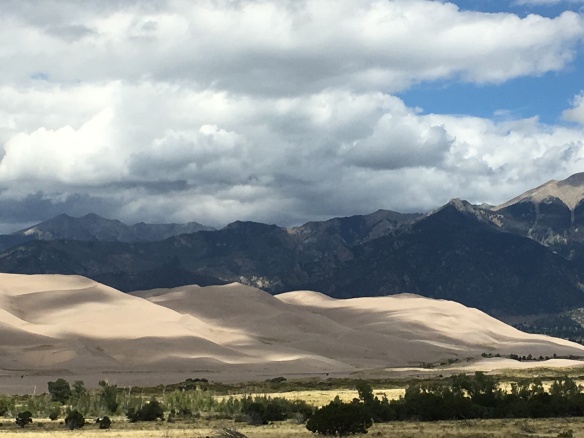 Pueblo is an historic city in Colorado which has a fabled history dating back to 1842 including at one time being one of the largest steel producing cities in the US.   Thanks to John and Barb Senger (a friend of Janet’s going back to high school in McMinnville), who traveled from their home in Boulder, we were able to spend a great day with them. 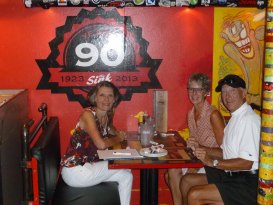 Janet and the Sengers at the Sink in 2015

Since they have Beerchasing roots going back to 2015 when we hit several breweries and the remarkable and renowned  Sink Bar – right next to the campus of the University of Colorado, they had set up a mini-tour of breweries and dive bars – some with the most impressive histories I’ve witnessed in the eight years of this hobby.

John’s son-in-law is Kirk Taylor, the Sheriff of Pueblo County and he and his wife, Cassy – a teacher – and his impressive daughter Sarah – a US Naval Academy graduate, formal Navy officer and after obtaining another Bachelor degree is now an ER and ICU nurse – and her daughter Penelope, met us in the late afternoon for stops at a few establishments. (I will cover these bars and these wonderful people in a subsequent post.)

We completed our road trip in the Southwest returning to Albuquerque after a short side trip to see the  Rio Grande Bridge, and spending a night at the unique organic farm (Los Pablamos Historic inn and Organic Farm). 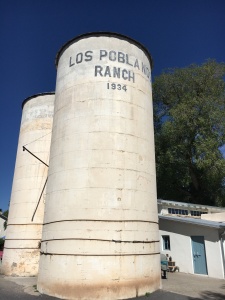 “Crashing a wedding at San Felipe

On our final day and one-half – the eighth and ninth of the trip, we spent the time hitting another chapel – this one at the San Felipe de Neri Church during a wedding ceremony we inadvertently crashed, hitting few more watering holes, attending a climate change demonstration in a City park and flying back to Portland in the evening.

The following shows the Beerchasing establishments we visited on this trip:

Oh – and did we tell you about Ernie Bob??