As mentioned in my last post, I am “catching up” on a number of bars and breweries visited during the last few years which never got written up – something which makes sense now when watering holes are closed except, in some cases, for pick-up.

The last post was Part I of two trips to Corvallis.    The most recent in 2018, in which I talked about our trip to the Oregon State vs Washington State game and a visit to the outstanding sports bar – The Angry Beaver Grill.  We met with former Beaver Giant Killer, Billy Main, who got us fifty-yard line seats. The link to that post is https://thebeerchaser.com/2020/04/15/beerchasing-in-corvallis-part-1/

One year earlier, in October of 2017, I was the overnight guest of Brian and Nancy King at their Corvallis residence.   During the day and one-half I was there, Brian and I hit several watering holes and in the evening, Nancy joined us briefly at Block 15 Brewery and Tap Room south of town and then we had dinner at Squirrels Tavern and in the evening, a nightcap at Caves Bier and Kitchen .

Brian and I also hit the following establishments:

Cloud and Kelly’s,  The Peacock

Those of you who follow my blog know that in my twenty-five years at the Schwabe Williamson firm and prior to that, six years at the Oregon State Bar, although not a lawyer, I loved working with them in my legal management role.

And my general affinity for the lawyer personality was characterized by Robert Elfers, a lawyer himself and my mentor/boss for over twenty of those years in both organizations, as a “pressing need for ongoing psycho-therapy…”

Thebeerchaser and “Brain” on 2017 visit

I have many wonderful attorney friends both at Schwabe and all over the country, but Brian (Brain) King, an environmental lawyer from the time he passed the Bar in -1980, until his 2016 retirement, is one of my favorites.  He epitomizes why I hold most lawyers in such high esteem.

He has also been on a number of Portland Beerchasing expeditions including the memorable Mummy’s (along with Schwabe colleague, Margaret Hoffmann and Billy Ray’s Neighborhood Dive Bar (with lawyers, Carson Bowler, Brien Flannigan and Cheryl Rath).  This also occurred in 2016.

Before social distancing – in 2016 at Billy Rays. Brian is holding the can of Tecate…

Before talking about the Corvallis saloons, I need to tell you why I make the assertion above.  Brian has a wonderful dry sense of humor and notwithstanding the accolades he garnered in his professional career as both corporate counsel at Boise Cascade, the Bogle and Gates firm and then at Schwabe, he does not take himself too seriously.

He was a skilled advocate and extremely knowledgeable in his specialties, but also an attorney held in high esteem by not only his firm colleagues, but those who were on the opposing side of the legal issues in question. 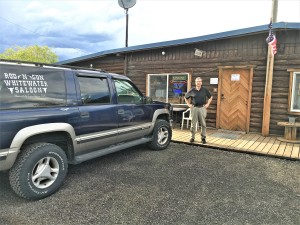 Thebeerchaser at the Rod & Gun

Now I also may be biased because he was a primary factor in the motivation to start this blog when I retired in 2011.  I’ll write another post to finish the Corvallis visits, because I feel compelled to offer this background.

Based on his own experience, Brian insisted on my 2004 sabbatical road trip to Idaho and Montana, that I visit the Stanley Rod and Gun Whitewater Saloon in Stanley Idaho.

The Sawtooths on the edge of Stanley city limits.

When he served as corporate counsel in Idaho, he spent time in Stanley at the foot of the beautiful Sawtooth Mountains and told me, “You need to stop at the Rod and Gun Whitewater Saloon and say hello to the owner and notable musician, Casanova Jack. You can find the bar at 44 Ace of Diamonds Street in downtown Stanley.”

The musician had a reputation throughout the West having at one time played with Marty Robbins and his band.   Jack’s bar also has a colorful history:

“Tall Mary, at 6-foot-4, ran the Rod and Gun Club with Casanova Jack, and a French woman served whiskey and great hot sandwiches all night long at the Kasino Club. (That’s just a block away and also on Ace of Diamonds Street.)  ”  (“Winter 2010 Sun Valley Guide”) 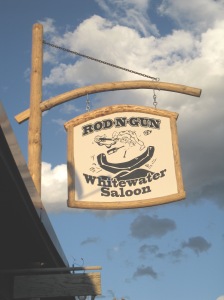 While visiting Stanley years ago, Brian even took the stage and was lead vocal on “Blue Suede Shoes” with Jack.

So while staying at Stanley on the road trip, I spent hours at the bar on Karaoke Night.   I made sure to ask if Casanova Jack was in and my conversation with the female manager went like this:

Beerchaser:   “One of my colleagues made me promise that I would say hello to Casanova Jack.  Is he in tonight?”

Beerchaser:  “I’m sorry to hear that.  I’m sure that he lived a colorful and active life.”

My wife and I returned to the bar on a road trip in 2016.  The bar is now owned by Jack’s brother, Johnny Ray and his wife of thirty-eight years, Eve. 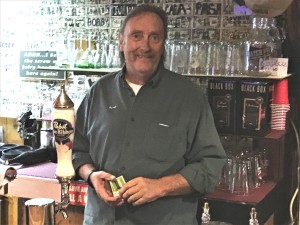 The personable Johnny Ray on our 2016 trip

Johnny Ray played the bass guitar and sang in Jack’s group and spent a good amount of time filling me in on his story and that of the bar.

After the notable experience at both the Rod and Gun and Lumpy’s Landing in Dundee, Oregon, I decided that visiting bars and breweries would be a fantastic retirement hobby which led to commencement of Thebeerchaser in 2011.  More about Brian and his wife in the next post. 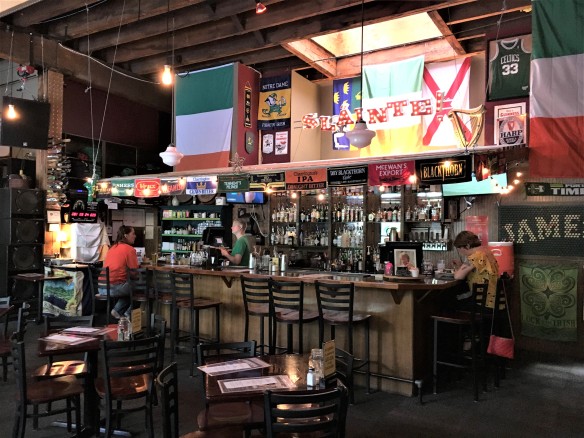 See narrative below re. the women at the left side of the bar…….

This spacious bar downtown has an interesting story as evidenced by this excerpt from a Corvallis Gazette Times article dated June 30, 2017 entitled, “Tiki Bar Stirs Up Cocktail of Accusations”:  (Pardon the length but the story is compelling)

“The Hapuna Kahuna Tiki Bar & Kitchen — until recently, the location was Cloud & Kelly’s Public House, an Irish pub — will close Sunday and reopen Sunday night as an extension of the Downward Dog, an adjacent bar that Davidson owns.  Hapuna Kahuna started its short run on June 22.

Davidson said that residents of Polynesian ancestry, including those with the Oregon State University Asian and Pacific Cultural Center, complained about a combination of factors such as the use of a Hawaiian name, traditional iconography displayed in a cartoonish way, and how plastic leis were handed off to customers.  Some Hawaiians and other Polynesians liked the Tiki-themed bar and didn’t want him to change it, Davidson said. 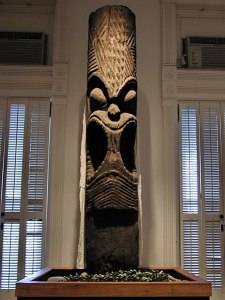 A local Facebook forum also had numerous comments about the situation, including questions of whether it was appropriate for chefs to cook ethnic food that wasn’t from their ancestry, such as a Korean chef running a sushi joint, since the cuisine is Japanese; discussion on the origins of Tiki ‘culture’ as an inauthentic fantasy mashup of tropical influences, and how there are Tiki bars in Hawaii; and comments on the evolution of Hawaiian cuisine to include items from numerous cultures, including those of Asian and Western countries.

The Tiki bar also made more financial sense than Cloud & Kelly’s, Davidson said, as the price of Irish cheddar, heavy creams, butters and lamb was rising. There also are rather obvious limitations to Irish cuisine, he added.

‘It all came down to the cost. … I know it had a good reputation but I felt I was at a crossroads and I was willing to try something new,’ he added.”

Now, since I don’t know the entire story in detail, I will refrain from making comments other than the cultural appropriation issues laid out above seem to pale considering the global health and economic issues we’re now facing.  And the story didn’t end there as set forth in two additional local news stories.

The downtown Downward Dog, Cloud Davidson converted, closed in late 2018.   What is a sad commentary is David’son’s understandable sentiments in the November 24, 2018 article:

“I’m OK with letting it go, but I’ll always have an ill feeling about how it happened…I took a big risk doing Cloud & Kelly’s and it took off like a rocket ship,” Davidson said…..From the middle to the right to the left, I couldn’t do anything right…..It’s beyond rhyme or reason. But it all just blew up in my face,”

We wish Davidson, who appears to have done everything he could to assuage the objections, the best as a small business owner, since he still owns the Downward Dog location near the OSU campus.

The good news is that Morgan Orr who was his right-hand person for years, is now the owner of The Brass Monkey: A Public House, which is operating out of Davidson’s former downtown space.  The campus DD is still open for takeout and the BMPH is temporarily closed during the lockdown.  Both have received great social media reviews.

Brian and I hit the former Cloud and Kelly’s in the early afternoon on a weekday and one of only two other customers was the dark-haired woman you see sitting at the left end of the bar in the photo above.   She evidently listened to us telling some stories and laughing and then went into the bathroom.  We had finished our beers and were ready to leave when she came out carrying a small paper bag. Walking boldly up to me with a big smile she said,  “You deserve a present,” placed the package in front of me and walked out. 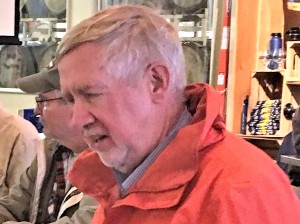 “Calm down and lower your voice, Beerchaser!”

Well, inside the bag were four marijuana gummy bears in the original package.   I was astonished and started to say  in a loud voice, “Hey Brian, those are ……..,” whereupon Brian in his best lawyerly voice said softly, “Lower your voice, Don and let’s split.”

Even though marijuana edibles are legal in Oregon, I harkened back to my NROTC days at OSU when even inhaling second-hand marijuana smoke was probably enough to lose my scholarship …..Brian, as usual, was giving good advice.  The package hit the next garbage can on the way to our car.

Having opened their initial brewpub in downtown Corvallis in 2008, Block 15 Brewery and Taproom is south of town in a very attractive building with a beautiful view of Mary’s Peak.   They also opened a European-style pub—Caves Bier & Kitchen downtown which we hit later that evening after dinner.

Two of my favorite Oregon beers are Astoria’s Buoy Brewing IPA and Block 15’s Sticky Hand Ale. (Both with fairly high ABV at 7.5 and 8.1 respectively)

A great IPA and my opinion was not influenced by the glass!

Block 15 is known for its “barrel-aged rarities and one of the Northwest’s most extensive wild & sour programs.”  According to an 8/29/19 Oregonian article:

” ….Block 15 remains fresh and innovative with ten years of brewing under its belt….From its well-known Sticky Hands Ale to a near-perfect pilsner, Block 15 has few holes in its game.”

Although we did not eat there, the social media reviews on the food are very good, as exemplified by this recent 1/7/20 Trip Advisor review:

“Great beer and perhaps the best sandwich I’ve ever had!   Every summer Block 15 has a sandwich called the ZATS – zucchini, avocado, tomato and sauce, on a french roll. I love this sandwich, and along with one of their hoppier beers I’m as close to heaven as I’m ever likely to get.  Also, their hamburger may be the best ever, as well. ….. ‘Nuff said.”

Note:  I’m happy to report that all three of the establishments covered above – Block 15, the Downward Dog and the Brass Monkey are continuing to offer safe options where you can still support them through takeout or home delivery.

Well Beerchasers, stay tuned for the third and final installment of Corvallis Beerchasing and some final comments on my wonderful hosts – the Kings.

5 thoughts on “Beerchasing in Corvallis (and Stanley, Idaho) Part II – Drinking with Kings….”