(Welcome back to Thebeerchaser.  Since this is a long post, if you are seeing it through an e-mail, please visit the blog to see all of the photos and read the story by clicking on the title above so the narrative is not clipped or shortened.)

I have written at length in several posts about Thebeerchaser’s six-day solo Montana road trip in the fall of 2019 – solo, that is, until I picked up my wife, Janet when she flew into Billings for the remaining nine-days of our trip.

The trip began with two days in Yaak, Montana where I spent a great amount of time at the Dirty Shame Saloon, getting to know the unforgettable character and now friend, John Runkle while I stayed at John’s Yaak River Lodge.

Overnight stays in Kalispell, Hamilton, Anaconda and Livingston followed – all wonderful, towns that beckon a return after COVID becomes a vivid memory from 2020 – not one etched into our everyday thoughts and prayers.

Now during that time, I hit 29 bars and breweries in pursuit of my Beerchasing retirement hobby started in 2011.  Due to the number of establishments, aside from the Shame, I have featured multiple watering holes in each post until now — the Club Moderne in the historic mining town of Anaconda.

That’s because not only is the architecture and décor totally different than any other bar in Montana, the Dakotas, Wyoming and Idaho, but the momentous story that continues to cement the Moderne’s legacy in the robust history of Anaconda is unique.

Now I am not and never will be a hunter, but I loved one almost universal characteristic of the Montana dive bars I visited.  Taxidermy is a recurring and dominant theme and as evidenced by the fact that there are 205 taxidermists registered in Montana and Helena even has the Montana School of Taxidermy and Tanning.

The 2019 annual convention of the Montana Taxidermists’ Association in Billings was the most well-attended ever according to the Billings Gazette.  The product of taxidermists is ingrained in the culture – kind of like soccer in Europe and losing in the Pac 12 Athletic Conference since Larry Scott became the Commissioner…. 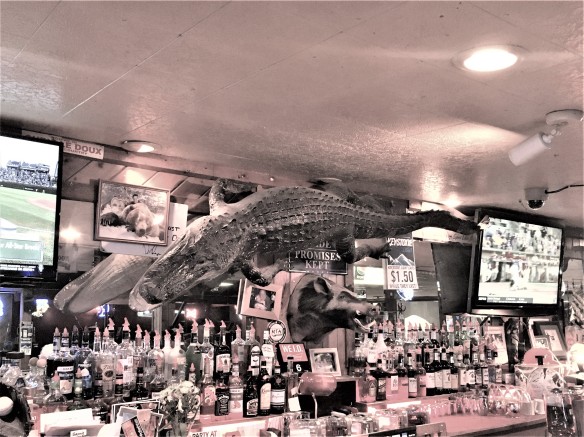 A notable example is the stuffed alligator hanging over what is reported to be the longest bar in Montana at the Blue Moon Saloon in Columbus Falls – the saloon also has a polar bear and grizzly in a gigantic glass display case among others on display.

Although there are too many to mention in this post, don’t forget the albino mule deer fawn tucked in between multiple other formerly wild creatures on the west wall of the legendary New Atlas Saloon in the heart of Columbus – a bar that originated in 1906. 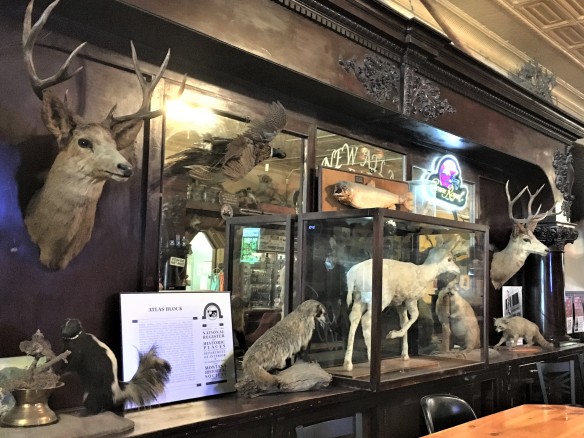 ….After a few drinks, you feel countless pairs of eyes bearing down.  You have another beer to relax under their scrutiny, look around again, and you’re among friends, the animals’ glares having softened to amused acceptance.”  (Page 95 – Montana Watering Holes by Joan Melcher)

One of multiple footrest spittoons at the New Atlas

The historic character is usually enhanced by dark wooden bars and backbars and in the New Atlas, spittoons, in the footrest running the full length of the bar.

But the Club had a one-of-a-kind exterior – at least in Montana – and possibly one of just two similar themes in the Western US (see below).

In Big Sky Country, such design was tantamount to finding a liberal arts major at an aggie school like Oregon State University or a guy, in what some regard as the Micro-brew capital of the Western Hemisphere, ordering a Budweiser at after-work gatherings in the PacWest Center in downtown Portland.  (Oh yeah, I guess I meet both of those conditions, but you understand my point – the Club Moderne is just very unusual and surprising given the context.) 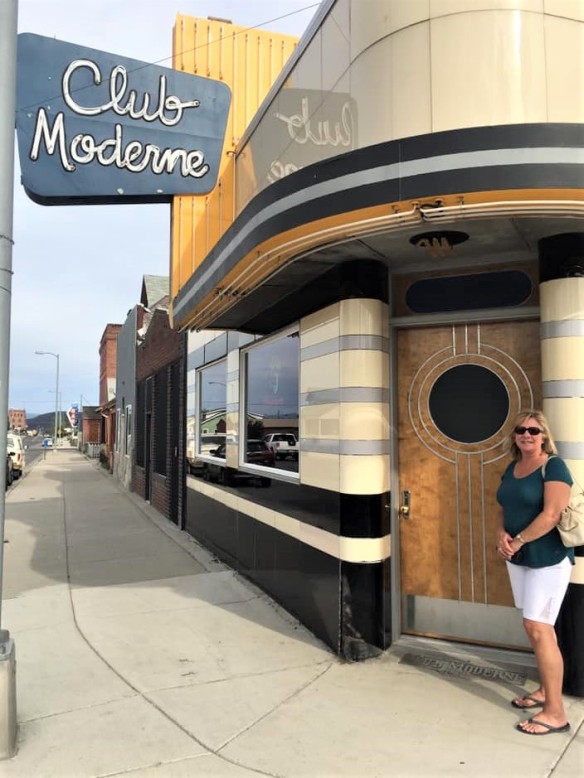 Now even though I was a liberal arts major, I had to look up the definition of “moderne”  – it’s defined by the Free Dictionary, in part, as:

“Of or relating to the art deco style marked by bright colors and geometric shapes….An architectural and decorative style popular from the 1930s to the 1940s and characterized by streamlined and curved surfaces, strong horizontal lines, and minimal surface ornament.”

And the Club Moderne was added to the National  Trust for Historic Preservation in 1986 and described on its website:

“The bar was – and still is – a sight to behold, with its rounded front facade and Carrara glass panels that perfectly embody the Art Deco style of architecture popular in the U.S. earlier last century.  Club Moderne was built under the direction of owner John “Skinny” Francisco. The building was designed by Bozeman, Montana-based architect Fred Willson and built by local carpenters and craftspeople.” 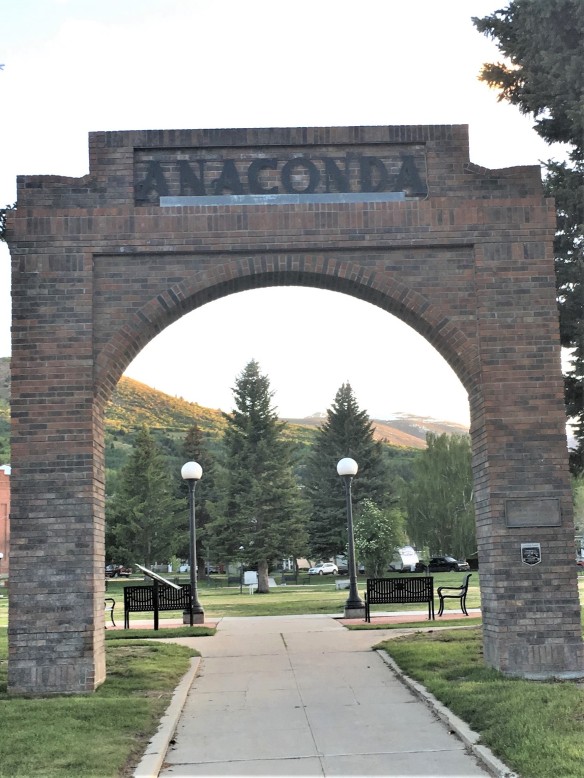 And the City of Anaconda – dating back to 1893 and a with current population of about 10,000, has an interesting history:

“…..founded by Marcus Daly, one of the Copper Kings, who financed the construction of the Anaconda smelter on nearby Warm Springs Creek to process copper ore from the Butte mines……

The Anaconda company expanded smelting capacity over time; by 1919 the Washoe Reduction Works could boast that its 585-foot (178 m) smokestack was the tallest masonry structure in the world and that the smelter-refining complex constituted the world’s largest non-ferrous processing plant. In 1980, Atlantic Richfield Co. closed the smelter, bringing an end to almost a century of mineral processing.”  (Wikipedia)

One of my friends lived there during the 1950’s and said that the town bustled with activity.  There was a bar on almost every block of Commercial Street.  But disaster struck in 2016 and a devastating fire ravaged the Club Moderne the night of October 3rd. To understand the sentiment of Anaconda residents, consider an article in The Missoulian when the Moderne reopened in the spring of 2017 after community efforts to make it happen.

One resident described the loss of the Club Moderne as “the most devastating thing to happen to Anaconda.”….Victor Zenahlik, a captain with the Anaconda Fire Department, said he felt “heartbroken and sickened” when he got the call to respond to the Club Moderne.  (The Missoulian – May 13, 2017)

But the Moderne, at least from what I saw, never lost the family-type character and historic flavor which defined it.  According to an article in the Montana Standard on 10/4/16:

The Owl – not an inviting environment

And it was the exact opposite of The Owl Bar – another Anaconda bar I visited which was one of the few places on my trip where I had the distinct vibe that those who weren’t regulars should probably find another place to drink.

Admittedly, this sentiment is based on only one try, although my visits to about 400 watering holes since 2011, gives me a pretty good feel for mood.   The Owl originally, and for many years, didn’t have stools at the bar which is some indication that it was more of a place to throw down shots than to mingle.

In contrast, the Moderne had and has a family environment which is what led to its recovery after the fire.   In the words of Stephanie Hekkel, the Moderne owner’s words, describing what she liked best – “….hanging out with some of Anaconda’s old-timers, who ranged from miners to smelter workers, lawyers, teachers and policemen…..They had their stools. Everyone knew where you sat…..Some regulars came five days a week.”  The Montana Standard 10/4/16 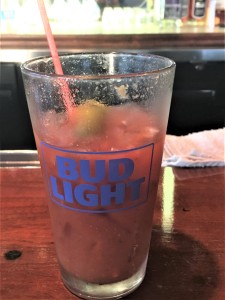 Is this what you call a “beer chaser…?”

I sat down at the bar and the friendly bartender, Destiny, went through the tap list while a woman named Wanda sitting on an adjacent bar stool, advised me that I should try the Bloody Mary – it was a great choice and not just because it was served in a tall Bud Lite glass….

It turned out that Wanda had some Oregon roots as she went to college at George Fox University in Newberg, Oregon – about twenty miles from my house.

And joining in the conversation were two affable young guys – Kyle and Logan – who it turned out were staying at the same hotel as I was and were in Anaconda for a month on a contract for the Montana Highway Department to install underground culverts.  The Club had quickly become their “bar of choice.”

The front of the establishment where the bar and booths are located is a bright and inviting room where various ornate trinkets and mementos adorn a lighted display case over the full length of the backbar. (The Moderne does not have a website and research did not yield any underlying story, but they were interesting.)

Author Melcher describe the front room in her 2009 visit:

“We order drinks and settle in, taking in the unerring details of art deco design.  The perfect geometry of the back bar, the copper and aluminum checkerboard ceiling, the stainless steel accents, the angles and lines in inlaid wood, the chromium and leather furniture – all details – all preserved.”

The larger back room – once restricted for ladies – because in Montana, as in many American jurisdictions, females could not drink in the same room as males – they had a separate entrance on the side or back of the establishment.   It’s now reserved for community events with a number of chairs, a shuffleboard game and an electronic dart board.

As a wonderful coincidence, Camille (Cam) Fallow, one of our nearby Oregon friends, when I related my Montana road trip experience and visit to the Club effused:

“Oh, You have found part of Anaconda’s history!  Many years ago, Club Moderne’s bartenders wore starched white vests and ties and the back room area was very formal.

Much of the design of the building was unique.  Folks far and wide knew about Anaconda’s Club Moderne, owned and operated by my step-father,
Skinny Francisco!  So happy that you stopped by there!”

The picture below from the Club’s Facebook page affirms Cam’s statement in this picture on its 80th birthday in 2017, when everyone dressed up as in the “old days.”

So, if you travel to Montana, be sure to put this bar on your itinerary.  And speaking of Cam’s step-dad, Skinny Francisco, if you prefer a more urban setting on the West Coast where you can check out the art-deco architecture, you might want to try the country’s other Club Moderne in the heart of San Francisco.

Stookey’s Club Moderne is located between Nob Hill and Union Square on the corner of Bush and Taylor Streets, where owner Tim Stookey also provides the art-deco vibe according to an article in Liquor.com.

“Tim Stookey, Stookey’s namesake co-owner, has spent nearly 20 years behind a bar. After much reconnaissance, he landed on the space near the city’s Nob Hill neighborhood.

The building itself has, appropriately, been a bar since 1944 and in all likelihood, ‘they were slinging booze here since Prohibition,’ says Stookey. The former Faverman’s Pharmacy #4—there were once five locations in San Francisco—became Faverman’s Liquors and remained a bar until its current incarnation.” 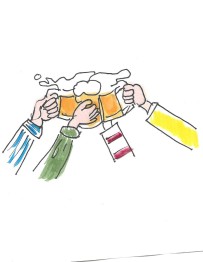