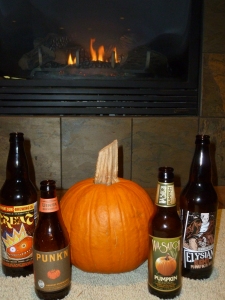 When the Suds are on the Pumpkin and……

Ben Franklin once said, “Beer is proof that God loves us and wants us to be happy,”  however, seeing ads for such malty concoctions as Chili Ale and Coffee Beer, make Thebeerchaser yearn for the good old days when Blitz, Rainer, Schlitz, Oly and PBR were the standard.  That said, I was intrigued by the idea of Pumpkin Ale and decided it would not only be worth tasting, but could also decorate our porch during Halloween and into Thanksgiving.

I checked my favorite pub for esoteric brews – “Bottles” – on NE Fremont (see thebeerchaser review in July 2012) and the bartender said they had eight types.  (I might add that a new wine and beer bottle shop “1856” opened only two months ago on North East Prescott Street and rivals the selection available at Bottles.  It’s worth checking out.)  I chose the four pumpkin ale options from Bottles as shown below:

My favorite was the seasonal from Wasatch although all were good to me except the Midnight Sun “Chocolate Pumpkin Porter.”  Elysian Brewery has a bunch of other pumpkin ale options too.

But a Willamette Week review of their – “Dark o’ the Moon Stout,” drew this criticism and essentially echoed my opinion of the Midnight Sun Brewery pumpkin brew, “…is far too thick and meaty for whatever decorative baby gourds found their way into the mash.  Deeply roasty with chocolate and a little bitterness, it’s a great beer for a chilly night, but three tasters agreed that pumpkin flesh and seeds don’t come through at all.”

Finally, if you want some additional information on pumpkin and fall seasonal ales, you can check out the October 31st Willamette Week article “Fall’in for Brew” with this link.  It rates ten local ales with most of them not really cutting it in the taste category.

While most people agree that the Portland City Council totally blundered in the process, they voted unanimously in September to add flouride to Portland water by mid-2014.  Of course, one concern is by some opponents who “bristle” at the potential impact on Portland’s micro-brewing industry.

Fluorite Crystals – A Taste Test to Determine the Impact on Portland Microbrews??

It was reported that Portland’s Upright Brewing strongly supports the move based on the premise, “Good teeth are more important than Beer.” Other brewery owners, however, are not so sure.  It does set up what could be an intriguing blind taste-test in the future.

And speaking of blind taste tests, check out Willamette Week’s “President of Beers” contest (not a taste-test between President O’Bama and Mitt Romney…….), in which the weekly paper, “….Bootlegged Beer from All 50 States for the Ultimate American Taste-off.”  The October 5th edition of the paper chronicles the process in which Beaverbear Barleywine from North Dakota was the ultimate winner.  Oregon had only one brew in the top 50 – Deschutes Black Butte Porter (#7).

Elections and the Weather

Well, the wonderful dry fall we had is now gone and besides bad weather, we have been inundated with endless campaign ads bringing to mind the quote from Alexander Pope on what may be the most pragmatic attitude for election results:

“Blessed is the man who expects nothing, for he shall never be disappointed.”

And although I will admit to a bundle of references to Willamette Week in this post, this quote from the cynically humorous “Dr. Know”  in his column comparing the weather between the United Kingdom and the United States, is a good quote and perhaps the underlying rationale for a blog focused on a tour of bars, pubs and taverns:

“The weather is never so bad that you can’t make it to the pub, but never so good that you can do anything else.  This leads to a city and/or nation of sad, damp, doughy people drinking to kill their pain……”

Pioneer Pete and Political Correctness The efforts in both Oregon and Washington to end Native American mascots, nicknames and logos reminds me of how political correctness can go too far.  Washington is taking a more moderate approach and passed a resolution urging high schools to replace the mascots, while the Oregon Board of Education passed a ban in May.  Eight targeted (so to speak) schools have five years to comply, although I think that term connotes violence and aggression…

It brought to mind the graduation gift my Class of 1966 at Oregon City High School presented to the school for the Pioneer Gym –  a massive poster of our mascot, Pioneer Pete – a rugged type shown below:

Even though he carries weapons, he is still smiling….

Well, the mascot initiatives above reminded me of a 2001 story reported by The Oregonian to purportedly modify the Oregon City logo, as stated in this excerpt from the December 12, 2001 story:

” A burly guy with a coonskin cap, Pioneer Pete stands like a sentinel throughout Oregon City High School. He stares from hallway murals, the backs of varsity jackets and walls in the gymnasium and football stadium.

A musket in his grip and a knife slung off his hip, Pioneer Pete is catching some flak these days. Some students and administrators say his weapon-toting ways break rules that apply to students. He’s even been booted off the cover of a brochure advertising the search for a new superintendent.”

I’m pleased to report that the current Pioneer Pete doesn’t have a flag pole replacing his musket (the option proposed by the School Board) or a hair dryer (suggested by some pundits) and he still carries his bowie-knife.  It was interesting to review the comments in response to the article including this one by a staff person from the District to clarify and perhaps resolve the issue:

“Please note that this was not about Pioneer Pete , the OCHS mascot. It was a clip art picture that was to decorate a brochure to advertise our superintendent position nationally. Our preference, with the covered wagon on the cover, was a couple of pioneers, not a mountain man with a gun.

The story in the newspaper was inaccurate. There is no conversation about changing Pete at the high school. The Oregonian reporter has certainly heard from us today about the misleading story and we have asked for her to clarify that this was not a discussion about Pete. On a slow news day, this story has taken off. We have been barraged with angry people over our decision to change a clip art picture on a brochure……….”

In my recent Beerchaser-of-the-Month post honoring – so to speak – OSU Football Coach, Mike Riley, I cited my friend, attorney, Brien Flanagan, a Notre Dame grad and one who is reveling in the Fighting Irish’s undefeated season.  I stated the Brian had received both his undergraduate and law degrees from Notre Dame.  I was wrong – he went to law school at Georgetown University – an impressive academic background for a good lawyer.