In Thebeerchaser’s first post on Old Town Brewing, (hereafter OTB) I sketched the story of the founder and owner, Adam Milne and his vision which has become a reality.

(Note:  This is a long post and even if you don’t peruse it in its entirety, be sure to check out the videos towards the end of the post.  But to check them out, you will need to click on the blog site rather than look at it through e-mail.  Just click on the title in your e-mail. You will be glad that you did…)

The prior post elaborated on the great ambiance and rustic environment, the team concept Adam espouses and briefly touched on the unfortunate legal battle with the City of Portland over the iconic OTB trademark in which Adam and his team prevailed after years of litigation.

But, the story is not complete without a detailed discussion of the beer and the creative marketing which goes into making it a gem in the NW micro-craft industry.  The list of awards for OTB beer is extensive and the styles of beer garnering awards diverse as can be seen from this link below:

For example in 2018, there were two Gold Medals – – OTB’s Pilsner and Shanghai’d IPA – at the World Beer Cup in Nashville – Adam described this as the “Olympics of beer competition.”

And at the Great American Beer Festival in 2014 – the “Academy Awards of beer” according to Adam – they brought home a silver medal – Sun Dazed Kolsch – following by a gold in 2015 for Shanghai’d IPA.

The honors continued in 2019 with three medals at the Best of Craft Beer Awards in Bend where brewers from 33 states compete.   Shanghai’d won again with a bronze – also one for Paulie’s Not Irish Red and a silver for Dark Helmet.  I was impressed that besides the reaffirmation of Shanghai’d IPA quality, that OTB has garnered medals for a diverse group of brews.

Adam credits a lot of this to the fortuitous hiring of Andrew Lamont.  He had spent about eight years with the Boston Beer Company two and one-half of which were as brewer for Samuel Adams Research and Development Brewery.

Adam was looking for a brewer in late 2014 and thought, “There’s no way he will work for me.”  Fortunately, Andrew, who was pursuing a PhD, decided he wanted to relocate to Portland.  This was after Lamont had earned his Master’s in Polymer Science at Southern Mississippi and his Master Brewer at UC Davis.

But it’s a team approach that Adam credits for their success as can be seen from this photo from the OTB website and his statement:

“”We feel our biggest strength in brewing quality beer is creating a team approach that feeds all of our passion and excitement,’ he says. ‘It was important for [head brewer] Andrew [Lamont] and I to create atmosphere that allows our management crew to lead and have a voice in the beer creation process.’”

Adam Milne and his team – creativity can be fun…….

While it would be easy to do an entire post on the following issue, we should touch on  the trademark battle with City of Portland – an example of bad judgment on the part of the City – an ill-advised bureaucratic foray which drew the ire of the micro-craft community, business groups and those who value common sense…..

Many citizens wondered why Portland was taking on this small business when OTB had applied and been granted the image for its logo by the US Patent Office.  Moreover, Milne had come to the City offering to compromise before the fight escalated. 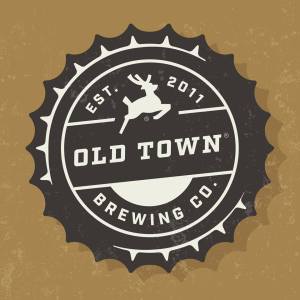 For those interested, a detailed account of the fascinating legal issues involved, check out Jeff Alworth’s blog Beervana:

Now, Intellectual Property law can be very technical, but if you want to see a summary of the settlement use this link from an article in Craftbeer.com

As I mentioned in the first OTB post, on both of my two visits I was accompanied by two very skilled lawyers who are also both wonderful human beings – some may think the categories are mutually exclusive.

Carson Bowler, a fraternity brother of Adam from U of O days in the ’90’s, and Brien Flanagan were in our group.

On the second visit, Carson, Adam and I got two flights of eight – a good idea given the variety of good beers and a very reasonable $10 – only a buck more than a flight of four.  My favorites on that visit were the Sun Dazed (German-style Kolsch) and the Belgian Tripel – a collaboration with Rogue Brewing with an ABV of 9.8%!

The three of us – based on the experience Carson and I had on our first visit, got another of the House Special Pizza – “The shop favorite since 1974. A combination of pepperoni, salami, mushroom, black olive, bell pepper, and homemade Italian sausage.”

On the flight path….with Carson and Adam

On the first visit I got a pint of their award-winning Paulie’s Not Irish Red Ale.  As a fan of red ales, I can state that it lived up to the description: “Impeccably balanced and malt-driven with notes of sweet bread and caramel, partnered with a medium hop bite and soft finish.”

While having a reputation for great pizza, OTB also has some other good eats including five different salads, pasta and six toasted subs of which the Meatball is the house favorite “Sliced meatballs covering a garlic buttered roll, mozzarella, cheese and house-made marinara dusted with Reggiano cheese and fresh basil.”

The first trip to OTB was a belated 70th birthday present from Carson and Brien and they paid deference to their elder by letting me have the extra slice of the House Special Pizza we split. 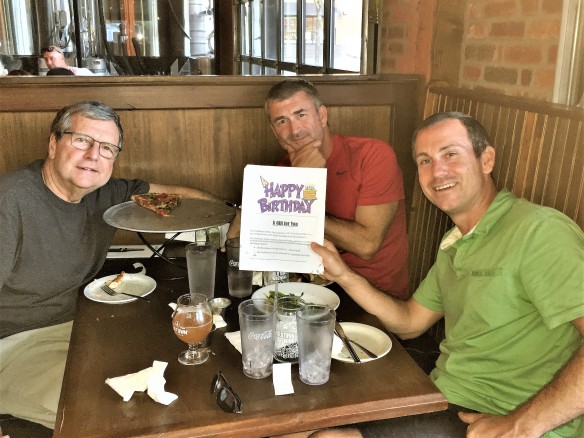 Belated birthday present – as you can see from this picture and the last, Carson when being photographed holds his head at an angle and adopts an intellectual pose

Brien is also a Beerchasing regular and, in fact, his last foray on this blog was right in the same neighborhood at Billy Rays Neighborhood Dive Bar. You should stop by this great dive bar on a trip to OTB. 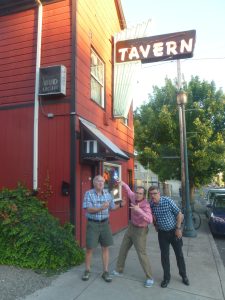 Flanagan (in the center) in a visit to BRNDB

One of the more impressive aspects to this enterprise is their creativity, which is demonstrated in the development and production of new beers – for example their Mushroom Ale – which some purists pan, but has gotten some good reviews.  Hiring a scientist as your head brewer allows adventures like this one that Andrew first tried as an experimental beer in 2015:

“Not only does this beer give you an experience that I can guarantee you’ve never had, it also tastes amazing. Like drinking carbonated maple syrup with a touch of umami character. Amazing.”

But also the display of their product in the cans which commenced in 2018 (as evidenced by the pictures below and this statement on their website:

“There’s much to be appreciated about beer cans. We trust these sealed vessels with the momentous task of transporting our precious cargo safely. We outfit them in our finest digs to help celebrate and convey our stories about who we are and what we stand for.”

Another innovation was the delivery of beer by bicycle, which started in 2012 – perhaps you will soon be getting a Glow Torch IPA by drone in the near future….

Although they don’t still deliver beer by bike, Adam says:

“We were the first brewery in America to do that based on our research.. I had the idea and called the OLCC who expressed doubt it was legal. They called back and said they all met and couldn’t find a reason it was illegal.”

One of the most innovative Brewery advertising methods I’ve witnessed since starting Thebeerchaser in 2017 is their video series. Maybe I haven’t been paying attention, but I thought these great ads were somewhat under the radar – “Beers in Paradise.”

They feature OTB’s Sales Director, Joe Sanders.  This four-part video series is extremely well done, humorous and shows what having an in-house creative artist and media expert can develop.  I asked Adam how this idea germinate:

“We decided to do something that spoke to our audience and communicated our seriousness for making beer in a really fun way. Once we made our first video, with Joe as our front-man…. the snowball started to roll. People loved them and we had so much fun making them.”

My favorite was the Pillow Fist IPA although you should check all of them out.  (They’re slightly hidden on the Website under the drop-down “Latest News.”)  And for a fascinating article – again on Jeff Alworth’s Beervana blog, read about the process as described by Creative Director, Jordan Wilson.

The process starts with naming of the beer, the context and set for the videos and is followed by evaluating the effectiveness of the videos through metrics.

“It’s total DIY….this feels like a unique strength for Old Town – we keep everything in house and avoid the high cost of creative overhead. And because of our lower investment, we can play with it more. Throw things at the wall, see what sticks.….(the videos have) become an extension of our brand and how we tell our stories.”

They also use videos to announce new releases.  Take a look at this one that announced Figaro Imperial Stout  – brilliant!

As you can see below, Adam gives his staff credit for their success – one of his core values.  For example, this notice on their website about Staff Appreciation Day.

“2018 was incredibly fun and certainly the most memorable year for us to date. We kicked off with a major rebrand of our company, canned our first brews, made it through a dispute that brought our community together and forever changed the way we hold our love and admiration for this industry, we started our videos series, collaborated with some of the most amazing and talented people, drank amazing beer, celebrated more“ 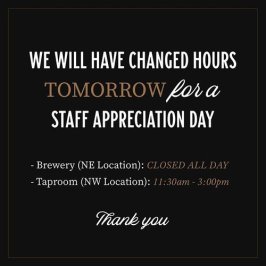 Another example was during the 2012 fire, when the Brewery and pub were closed for three weeks.  The staff’s pay was continued during the closure.

There’s no question that those who want a good brewpub experience have a multitude of options in Portland, but this 12/7/18 Yelp review summarizes the composite experience well and illustrates why you should drop by and say “hello” to Adam and his team:

“Delicious brews and FIRE pizza! The space is large but cozy. I was recently there for a work event and the food was AMAZING plus the service was top notch. Their bartender Tony got our 20+ person party drinks quickly and he was SO FRIENDLY – not the usual response to large parties in PDX. The vibes were great! Of course, I’ll be back!” 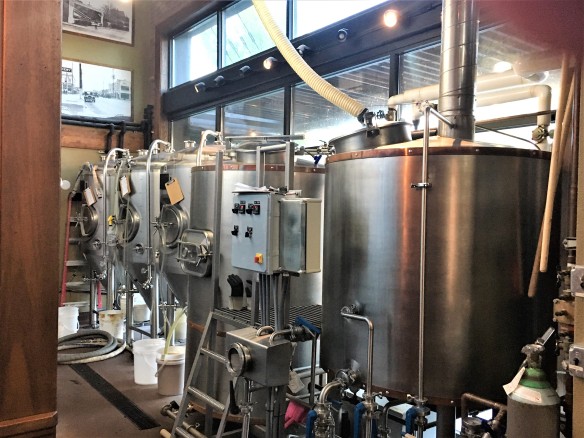