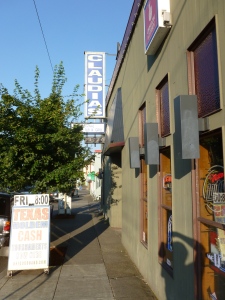 “…The friendly bartender here is steering a ghost ship:  On a Saturday night no one seems to be doing much at this Southeast haunt except plunking cash into an endless sea of video poker machines.  Too bad – the overflowing trophy case speaks of better days.”

Thebeerchaser would suggest that this writer was brain addled – the kind of intellectual lightweight who doesn’t have an adequate appreciation or understanding of history – who would define the Louisiana Purchase as buying a café  latte at a New Orleans Starbucks. Perhaps novelist and academician, John Gardner’s quote is more charitable:

“History never looks like history when you are living through it.” 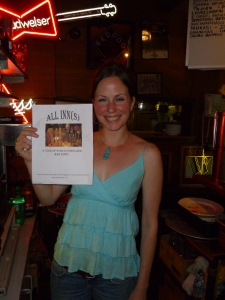 Sarah with Thebeerchaser logo. My favorite waitress/bartender on the beer tour so far.

And it appears that he was axed or replaced by the Portland weekly as evidenced by reading subsequent reviews in 2009 and 2011 comparable publications:

2009 – “When all the (athletic) contests are concluded…how do they keep the beer-sodden spectators in their seats….?  Claudia’s, the dowager of Portland sports pubs has devised a resourceful solution:  After the last out, the bar switches to karaoke, projecting lyrics onto its largest screen.  It’s an ingenious idea, not least because it allows crestfallen fans the chance to constructively vent.  Claudia’s needn’t worry:  It continues to pack ‘em in with high def TVs, cheap pints and its claim to fame – high-backed green captain’s chairs lining the bar.” 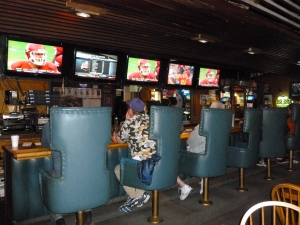 2011 – “Claudia’s is the best sports bar in Portland…..Every year it seems like more new, hip sports bars open, but at the end of the day, there’s only one place I want to go when the game is really close.”

Claudia’s seems like a good and appropriate name for a tavern.  It was named after founder Gene Spathas’ wife.  According to Gene’s Washington High School classmate and SAE fraternity brother at OSU, Oregon City attorney, Don Bowerman, “Gene was a gifted businessman and Claudia Mickelson was an intelligent, classy and beautiful lady.” 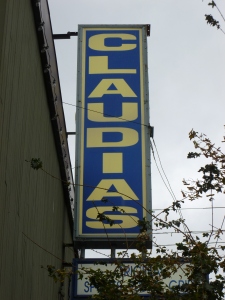 The Moniker Fits the Location and the Tradition

It should be noted that naming a bar after a wife named “Mildred” or “Gertrude” would not be a good thing regardless of her attributes.  Claudia was different.

Gene Spathas graduated from Washington High School in 1950 and attended Oregon State University and was an avid Beaver fan.  His obituary stated that although he would never admit it publically, he actually graduated from the U of O in 1958.

He married Claudia and they opened Claudia’s as partners the following year.

The Interior – Gene Spathas and his wife opened Claudia’s to be more than just a sports bar.  As their website states, ” (Claudia’s was) developed as a total concept, our purpose is to provide a gathering place that is warm, pleasant and physically and aesthetically pleasing.” 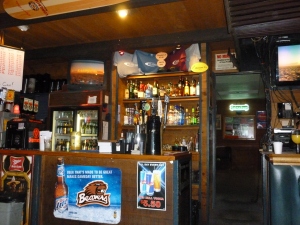 The captain chairs are obviously distinctive (although they make it hard to eat a juicy hamburger….).  There are probably more TVs and monitors with more different sports options than most sports bars in the City: “We currently offer high-definition (HD) big screen, a number of HD LCD screens, ten satellite receivers as well as a numerous monitors. Claudia’s prides itself in continuing to provide the best in sports viewing.”

There were 11 TVs in the main part of the bar including 5 big screen, and five in the back part.  While I sat in my Captain’s Chair and consumed some delicious fish and chips with a Manny’s Pale Ale, I simultaneously watched a Yankee – Red Sox game, saw the Mariners lose another game with less than five hits and gazed periodically at some obscure soccer teams from Europe battle to a scoreless tie.

Sports History Memorabilia – Claudia’s’ is like a mini-Oregon Sports Hall of Fame.  The gigantic trophy case in what is now the poker room is stuffed with hardware from the victorious AAU Basketball and other teams which were a hallmark of the pub for decades. You can also see basketballs signed by John Wooden and legendary announcer, Dick Vitale. 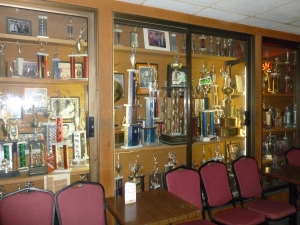 The black-and-white scanned photos on their website give an incredible nostalgic gallery  – I even found my high school varsity basketball coach, Dale Herron, who starred at basketball at U of O (also played football) before he coached at Oregon City High School and then at Olympia (WA) High School where he was recently inducted into their Athletic Hall of Fame. He played for Claudia’s from 1961-7 during which time they won three NW AAU Championships. 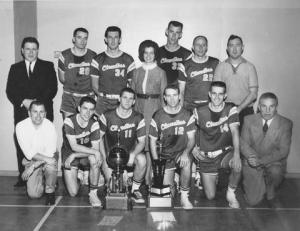 No. 34 – Former U of O star, Dale Herron (third from rear left) who coached OCHS to the TYV League Championship in 1966.  Coach Walt Spitznagel is on the right in the second row.

Other sports mementos such as a signed Chicago Cubs jersey and photos provide additional ambiance to the main part of the bar.

Seeing the picture of Portland’s colorful and sometimes controversial, Frank Peters brought memories of his former pubs and his present bar scheduled for a future visit on Thebeerchaser tour – The Grand Café. 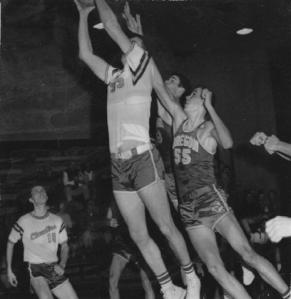 Poker – One change at Claudia’s is the poker games – seven nights each week as can be attested to by the signs below.  The entire large side room is taken up by card tables each night and I was amazed to see seating charts – an indication of a serious approach.  While there appear to be about twenty taverns or more that have poker nights in Portland, Claudia’s, based on a web search, appeared to be the only one with social gaming every day of the week. 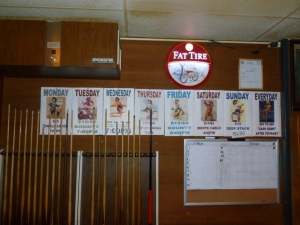 And this is serious stuff as evidenced by this excerpt from the gaming rules on their website:

“No Rabbit Hunting, No Side Bets, Any Shown Cards are Exposed to All Players, No cash on table, Please limit cell phone use. Decisions of the Administrator are Final.”

The Menu – The pub’s menu is very good for a sports bar.  Beside 12 beers on tap when I was there they have “featured drinks’ such as Claudia’s Margarita and a Citron Cooler. 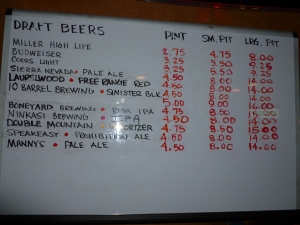 A Variety of Good Beers on Tap for a Reasonable Price

There are eight different hamburgers, several chicken-burgers, ten sandwiches, pizza, salads and eight “specialties” such as Fish and Chips.  Another nice touch is peanuts available for $1.50.

Gene Spathas was a savvy businessman and also owned the Kitchen Kettle, Beef and Brew and the Steak Skewer restaurants. The tradition initiated by Gene and Claudia Spathas at Claudia’s continues as their son, Marty, a 1980 OSU grad, now manages Claudia’s over fifty-three years later.  It is more than a sports bar and was one of the highlights of Thebeerchaser tour this year.