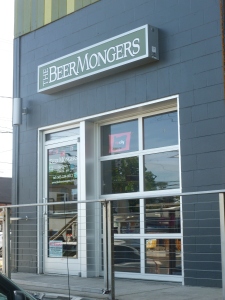 Former Portland Mayor, Sam Adams, was hired as Executive Director of the City Club of Portland in February 2013.  Shortly thereafter, Sam and I had a few beers at The Tugboat Brewery in downtown Portland to talk about the challenge ahead at City Club – I have been a member of that great organization for 43 years….. 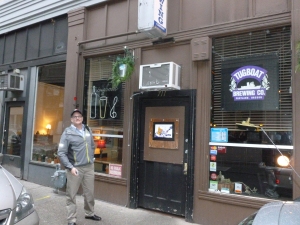 I thought it was time for us to have another chat, so I invited Sam for a Beerchaser Event at the Commons Brewery in SE Portland.    We headed there late in the afternoon, but it was closed, so we started a search in the nearby blocks.

We encountered one of Portland’s nice dilemmas – and one which reaffirms the premise of this blog – Thebeerchaser’s Tour of Portland Bars, Taverns and Pubs – a corner in SE Portland with three great bars facing us: 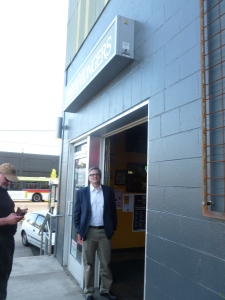 The guy with the cell phone is on the left edge of the picture!

I somewhat arbitrarily chose The BeerMongers and I could tell it was a good choice when we walked up to the entrance.  A guy was standing immediately outside talking on his cell phone and exclaimed, “Sam Adams.  Wow!  Will  you say hello to my girlfriend?”  Sam obliged and we went into this combination bottle shop and taproom that has  great ambiance.

We had just ordered a beer when a young woman came up to our table and said, “Sam Adams, we really miss you.  I want to buy you guys a pizza!”  The woman was the owner of Portobello a vegan trattoria in the same building as the bar and in between Beer Mongers and a tattoo shop! 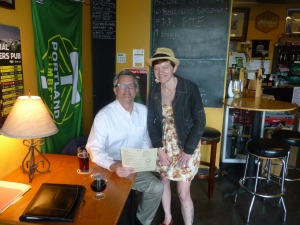 The owner of Portobello

Besides having some great beer that day, I had my first vegan pizza – an arugula pesto with toasted walnuts and smoked Portobello mushrooms – it was excellent.

The Arugula Pesto Pizza was a winner.

While BeerMongers is small, it was lively on both visits and has a group of regulars and oozes character.  The following two reviews from Yelp give apt descriptions:

“Man oh man, I love this place. First time I came, it was with my father and step-mother on a hot, long summer day. The exceedingly kind bartender (slash…beer curator?) handed us glasses of Radler, and I fell in love instantly. Not with the bartender – with Beermongers itself…….

While they do their most business as a bottle shop, I always come here for the small but well-selected tap list. These folks really know their stuff, and they love to both introduce people to new experiences and provide bottles of old favorites.” (12/13) 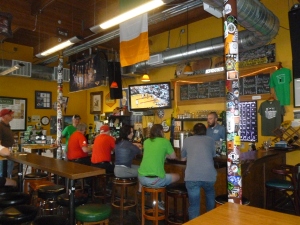 One of the best features of this bar  was Jim, the bartender – and he definitely did know his stuff.  I was also impressed, because when I went back for my second visit about two weeks later, he pointed to Thebeerchaser logo he had pinned to the wall and addressed me by name. 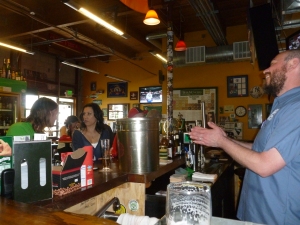 I also got to meet Sean Campbell, the manager, who opened the bar four years ago, after 18 months looking for leased space and researching the concept – to offer a small group of well thought out and select beers on tap, in addition to a wide selection of very reasonably priced bottled beers (about 600 including 100 ciders). 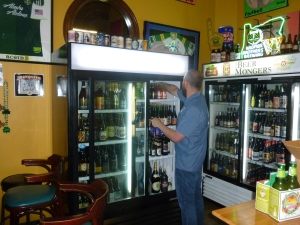 BeerMongers introduces about 20 new bottled beers per week and is a destination for Portland beer tours — understandably, with three bars on the corner of 12th and Division (Double Dragon and Apex)

The eight taps on our first visit were: 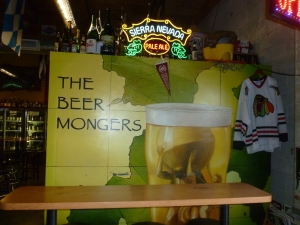 They keep the overhead and prices low, in part, by not having a kitchen, but you can bring in food – like from Portobello!!   Sean learned a lot by working for McMenamins for 15 years. 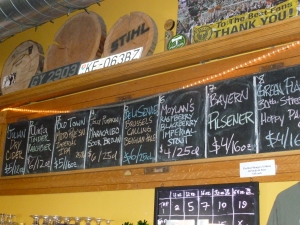 The rotating taps on the second visit

I chuckled when he told me that his first employee – a guy named, Sam – was a lawyer who graduated from Dayton University Law School.  One of Sean’s principles is to hire well – as evidenced by Jim, but I got the impression that lawyer Sam did not work out…… 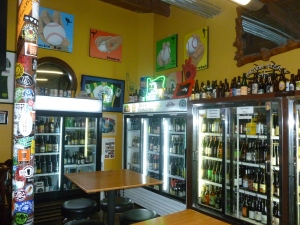 A small sample of the 600 beers/ciders available.

Another one of Sean’s operating guidelines is, “Don’t BS and know your product well.”  He didn’t remember how they selected the name, Beer Mongers, but it is appropriate since a fish monger is defined, in part, as:

“One trained at selecting and purchasing, handling, gutting, boning, fileting, displaying, merchandising and selling their product.”  (Well – okay, not even Hog Heaven Ale requires gutting, boning and fileting, but one could assert that Steelhead Extra Stout and Trout Slayer might…?) 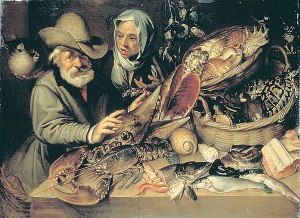 Fish mongering – presumed to be followed by brewskis….

While Sam and I enjoyed our drafts, we talked about City Club.  I told him that I was one of a number of people who had questions about how good a “fit” he was for the Exec. Director slot; however, his performance and energy has converted the skeptics. 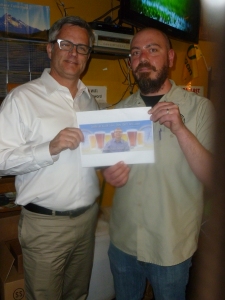 Sam and Jim with Thebeerchaser logo

City Club membership has increased by 25% to 1,800 and the membership is much more diverse as is the Board of Governors – a long-term City Club goal.

Corporate sponsorships have doubled, the Club has a new communications strategy, website and logo.  In addition, under Sam’s leadership, there are now new and innovative programs including Civic Drinks and Friday Night Forums and the proposed Civic Scholars Initiative.

Finally, the City Club Research program – nationally recognized – has grown from two studies to eleven – the most since 1987 and eight of the eleven research committees are chaired by minorities.

We also discussed Sam’s work for the last several years with Christian evangelist, Kevin Palau, President of the Luis Palau Association and his organization – working to connect the evangelical church with political leaders and to collaborate for positive change.   This includes aiding in charitable activities from city park renovation to counseling people in need.

They recently returned from meeting with leaders in New York City – as they have done previously in Atlanta, Nashville and the Bay Area.  They are promoting the Season of Service concept initiated six years ago in Portland with great success. 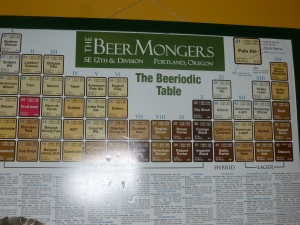 The BeerMongers is worth a visit both to sample one of their drafts and to take home a beer or cider you have never tried before.  And while you’re at it, bring in one of the Portobello entree’s – it’s a great combination.  They’re vegan so they don’t have to be gutted, boned or fileted.

The BeerMonger’s website doesn’t do justice to what this venue has going for it, but you can learn a lot about beer by checking out the Beeriodic Table (shown above) and clicking on one of the types of beer which brings up interesting details.

They also have a Facebook Page and are even advertising as of June 4th for an Assistant Manager/Beer Buyer:

Tell them Thebeerchaser sent you.

(To view the map with all the bars reviewed by Thebeerchaser, click on the “View Larger Map” link at the bottom of the map below)