The initial post in this series, chronicled the first part of our week-long trip to Phoenix/Scottsdale in January.  Along with hiking and relaxing, we hit eleven breweries during the trip.  Arizona has stepped up its beer culture and the establishments were interesting, the people cordial and the beer very good although for the most part, the exteriors were largely a reflection of the strip-mall ambiance of this SW desert metropolis.

If one can handle the traffic and the visual blight from the sprawl, there is some nice weather if one hits Phoenix at the right time.  We did escape a week of rain in the Northwest.   Unfortunately, this year, we weren’t able to make it during Spring Training – something even marginal baseball fans tend to love.

The breweries we visited and the hikes we took the first few days of the trip are described in the first post:

Arizona has some interesting politics.  In the first post, we talked about a nice family brewery named Goldwater – for the late conservative Republican Senator, Barry Goldwater.  *1 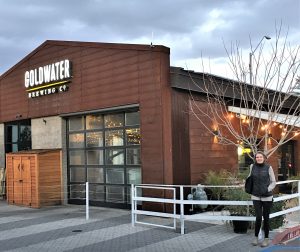 Although the retired Air Force General had some strong beliefs on national defense that some thought too militant, he was admired for his integrity and service to his country.

But since this is a blog about bars, taverns, breweries and beer, let’s get back to the primary topic and leave comments about Arizona politics to the end of this narrative.

Wren is a very small place – opened  a few years ago  in an historic home.  It evidently was originally named Westward Brewing “….until a pesky trademark lawsuit from a West Coast distillery forced the name change.”  (Draft Magazine)

“……the property we now call home at Wren House sat unoccupied and disused for decades. We fell in love with its character, rebuilt the old guest house and garage in the backyard into our brew-house, and converted the main 1920s bungalow house into our cozy taproom.”

The woman with the laptop is second from the left.

Janet and I sat at the nice bar, which filled up in the late afternoon and shared a Wrenovation IPA – a good hoppy IPA with some citrus flavor.

The people at the bar were all conversing and a young woman who brought in her laptop and was doing some work while having a beer, joined the conversation.

We started comparing beer in the Northwest to Arizona and she mentioned that she had just been to Portland in June of 2017.  “My husband’s nephew graduated from Oregon City High School and we attended his graduation.”

We have found that conversations while sitting at the bar are almost always interesting and establish linkages.  (Read about our conversation with the character on the right at Sun Up Brewing in the first Phoenix post and his tale about George Hamilton……)

Helton Brewing describes itself as “Your Neighborhood Brewery” although that seems contradicted to some extent by the fact that it is in a totally commercial and industrial area and located in a 10,000 square foot warehouse – formerly a radial tire operation.

The brewery and taphouse opened in 2016 and has expansive space adjoining the bar area for events and which houses pool tables and shuffleboard.

We were there in the mid-afternoon on a weekday and there was only one other person in the expansive space besides the staff.  (The yellow stools were kind of cool.)

We split their flagship beer – the Scottish Ale.   Since we had already had lunch, we did not ascertain whether their assertion that “It pairs well with robust foods like lamb, gruyere and beets,” was accurate.

That said it was a good ale and the owner, Brian Helton, has an extensive background in brewing and according to Draft Magazine, has won several Great American Beer Festival awards when he brewed at Rock Bottom Brewing.

Other breweries we hit included the larger Scottsdale Beer Company and OHSO – the latter also has a brew-pub at the Phoenix Airport.

Scottsdale Beer Company was hopping on a Monday night when we stopped in for beer and dinner.  We headed there after reading some great social media reviews on both their beer, the food and their large patio.

And the reviews were accurate….They had about fifteen of their own beers on tap plus several guest taps.  I tried the Red Rocket Imperial Red IPA – partly because I was amused by the menu description:

“The chewy maltiness….”  (One of my pet peeves is ridiculously contrived descriptions of beer to be creative.) 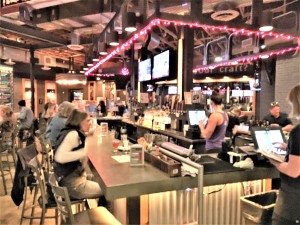 SBC – hopping on a Monday night

Janet, at the recommendation of our friendly server, Shalene, who had worked there 2.5 of the three years since they opened, recommended the Big Mouth Blonde, which also had an interesting description:

“It wouldn’t be Scottsdale without all of the nipped, tucked and chemically enhanced ladies that call it home……Perfect for a friend who always orders a Coors Light, yet flavorful enough to know its fresh and locally crafted.”

We started what was superb food with two tacos – since it was Taco Monday – only $4 for two with your choice of meat.  Janet then had the fish and chips and I had one of their five “Large Plates” – the Protein Rice Bowl which was, in fact, large and a delicious combination of:

The next day we stopped into Four Peaks Brewing – a large brewery in Tempe with a Taphouse and Grill in Scottsdale.  Nothing really special on the Scottsdale Brewpub – again in a strip mall (the address was 1340 E 8th Street #104)  but we had a good flight of their beer.  One of the four was creatively named Kilt Lifter – a robust Scottish Ale.

A flight at Four Peaks

The entrance to OHSO

Only one minute away by Google Maps and past a Home Depot, Safeway, Staples, Target and a mini-warehouse was OHSO Brewing and Distillery (“Outrageous Homebrewer’s Social Outpost” ) – I did not ask why the apostrophe was before the “s” since that would mean only one person hung out there….

But the place was kind of interesting with the brewery hardware visible, good accoutrements, a large distillery tasting room (it was empty although one can take a tour for two of the distillery for $28 which includes a bottle of their distilled spirits, except for barrel-aged ones….)

They also had a very large and brightly-lit patio area and a game room.

We decided on the way back to the hotel to hit one more brewery – Mesquite River – recommended by a few people, but again this little place that also advertises itself as “Your neighborhood craft brewery,” was in another strip mall and looked like a Petco from the outside.

We walked inside MRB just to take a picture, but the combined ambiance of the parking lot and traffic noise argued against stopping and having a pint.

Our last night in Scottsdale, we decided to have dinner in other than a brewery and chose the excellent restaurant True Food Kitchen, where besides excellent and healthy food, they mix one of the best Citrus Skinny Margaritas I’ve had anywhere.  (Maybe it was “Skinny Citrus” but you get the point……..) 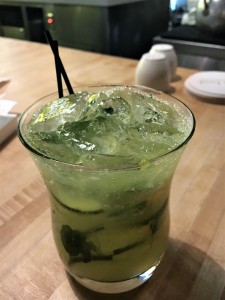 Fortunately, the cell-phone charges I incurred when I inadvertently called a similarly named restaurant in Dublin, Ireland were only a little over $1.

I had called at about noon our time and told Janet, that although it was hard to understand the guy because of his accent, they didn’t have any tables left that evening – this seemed odd given the time – until I looked at the call record and saw “Dublin.”  I then tried to figure out whether the guy just had a brogue or was speaking Gaelic….

A great restaurant without having to travel internationally….

Earlier in the post I mentioned politics and the legacy of Barry Goldwater.  Arizona evidently does not see the same level of integrity in its latest candidate for the Republican nomination for the US Senate – former Maricopa County Sheriff Joe Arpaio.

Yes, the convicted felon, can run for office although only based on being pardoned earlier this year by the President.  To read an entertaining, albeit sobering article, from the Phoenix New Times entitled “10 Reasons Not to Vote for This Bloodsucker (You Want More?)”

The paper states, “…..we are publishing excerpts from 10 of our Worst of Sheriff Joe stories today, in honor of his decision to enter the ‘wackiest Senate race in the country.” (They have published Sheriff Joe exploits for years.)

*1  I was also surprised to see in light of events which transpired since we were in Phoenix, that the Goldwater Brewery still has its Machine Gun Teddy beer on tap – they advertise it as “cuddly.”

You might remember that the Brewery has a second place to drink sixteen feet below the main taproom – in the space which used to be Mandall’s Basement Shooting Range.   Three of the former shooting tunnels are filled with fermentation tanks!

Oh well.  Notwithstanding some of its politics, the landscape and urban planning, by visiting the Phoenix-Scottsdale area, you can (if the right time of year) get some nice weather, take some good hikes and drink some excellent beer in interesting breweries – many of which have only opened in the last several years.  And you’ll be happy to return to your home afterwards – unless it’s Newark! 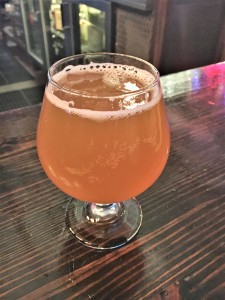