With their defeat of Utah in Corvallis last Saturday, the OSU Football Team is undefeated after six games and rated number 7 in the country in both BCS standings and the AP poll.  It begs the question as to how “learned” experts in the pre-season could have picked the Beavs to finish last in the Pac 12 Northern Division.  Not since 1907 have the Beavers been 6 and 0 and a win against the Washington Huskies Saturday night would be the first time in school history the football team was undefeated after seven games.

Coach Mike Riley now has 78 wins at OSU during his time as head coach (1997-8 and from 2003 through the present).  He also left a legacy at Corvallis High School as an outstanding quarterback.  It had been dark days for Beaver Nation before Riley’s tenure with 28 consecutive losing seasons – from 1971 to 1998.

Undefeated After 6, Rates a Guiness Stout rather than a Blitz!!

Thebeerchaser raises his mug to Coach Riley and the Beavs, and not without some internal risk (husband of an Oregon Duck and oldest daughter and son-in-law are both Washington Huskies).  Not since the year of the OSU Giant Killers in 1967, when thebeerchaser, as a sophomore at OSU, personally witnessed the Beavs 3 to 0 upset of OJ Simpson and the top-ranked USC Trojans, has there been this much excitement in Corvallis.

One of my law firm colleagues at Schwabe Williamson & Wyatt, Brien Flanagan, who went to Notre Dame, as an undergraduate and then law school, is also enjoying his alma mater’s undefeated season so far.  Who knows if history will repeat itself and I will be able to update the poster (shown below) created in 2004 after the Beavers defeated the Fighting Irish in the Insight.com Bowl. (the poster also references the Beaver’s victory over the Irish in the 2001 Fiesta Bowl) 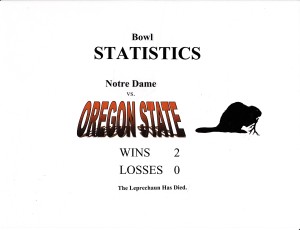 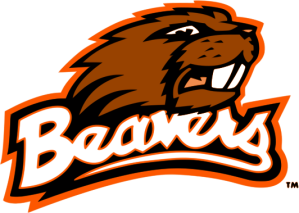