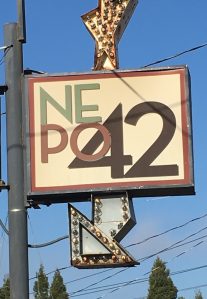 Since the start of Thebeerchaser’s Tour of Bars, Taverns and Pubs five one one-half years ago (now at 75 Portland bars and 125 throughout eastern Oregon and the Oregon coast, several US regions and Europe) several methods have been used to “discover” some wonderful new watering holes. Sometimes it’s through the recommendations of blog followers or a review in the press or social media.  And I try tp research and find bars or breweries that are not just part of the mainstream.  It has led to positive results. 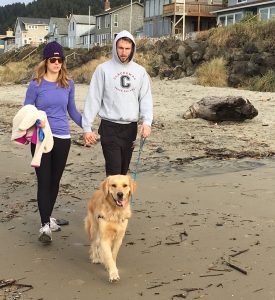 But the discovery of NEPO 42 in Northeast Portland, albeit indirectly, can be credited to a wonderful two-year old Golden Retriever – Wesley Walter!   Wesley belongs to my daughter, Laura, and her husband, Ryan.  You see, NEPO 42 is right across the street from 3 Dogs Boarding and Daycare, where Wes goes to cage-free doggie daycare and sometimes boards when the young couple goes on trips.  http://www.3dogsboardinganddaycare.com/ 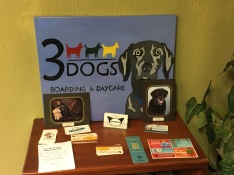 And although this is a blog about bars and beers, 3 Dogs deserves a shout-out as well.  They have always taken good care of Wes and the staff is friendly, helpful and committed to the canines who are their “clients.”

Wesley in his younger days about 1 1/2 years ago..

Laura and Ryan had mentioned a small bar and grill on NE 42nd Street, right across from 3 Dogs – it’s on the border of the Cully and Concordia neighborhoods –  so I decided to try it out when reconnecting with a former work colleague and friend, Bernie Stea.

Bernie and I worked together for several  years at the Oregon State Bar in the early 1980’s when he was the Bar’s Director of Continuing Legal Education and I was the Business Manager.  (more about Bernie below)  Bernie drove in from Camas, where he and his wife, former Portland radio personality, Deb Janes, are managing brokers at the Carl Group, a real estate investment and development firm.

Not the most impressive exterior……

NEPO 42, like a number of bars I have visited, is housed in what cannot be considered an impressive structure (it also has a very small parking lot) but the interior is a different story.  It radiates a warmth as aptly described in a Willamette Week review shortly after it opened in 2009:

“I expected Matthew and Sara Firosz’s bar to be a slightly remodeled neighborhood dive, but the pleasant space, decorated with art nouveau posters and black-and-white photos and with the remains of aged ceramic tiles on the floor, possesses rough, unpretentious elegance. It also has everything you could want from a neighborhood pub: a long bar, plenty of booths, a massive flat-screen TV” (W. Week 3/10/09)

And while this blog focuses more on beer and bar history than food, let’s talk about the latter before discussing NEPO 42’s impressive twenty beers on tap.  The menu is diverse and not your typical “pub faire”.  Based on my two experiences and customer reviews, you will not leave hungry.  S goof summary is this 6/2/16 Trip Advisor review:

“Wow what a neighborhood GEM. Outstanding Pub Food with a great selection of taps from all over the Northwest. They do all their own smoking and that spells the best pulled barbeque pulled pork that probably is the best in the Portland area. Be sure try the chicken club very tasty and very fresh. Good selection of healthy salads.”

Willamette Week named Nepo42 in its 2016 Best of Portland issue for the third-best wings and in a 9/20/16 review on “Best Happy Hours” stated:

Fried Chicken and Waffles with bacon in the middle) – I even took some home….

“….seek out the masterful fried chicken—golden-brown chunks of crisped succulence either layered atop a waffle or hidden within the bacon-, spinach- and pepper-laden mac and cheese……$6 OG Dog (a ginormous frankfurter wrapped in a sturdy potato bun and slathered with jalapeño relish, homemade sauerkraut, and a house mustard itself steamed with Old German).”

To be objective, there was one vociferous critical Yelp review on 9/15/16 – maybe the cook or the customer just had a bad day……

“Jalapeño Poppers were just BURNT and exploded (they were so dark it was like eating charcoal), cheese sauce for Barnyard fries was grainy and tasted like flour, burger was overly well done and dry (when I had asked for med rare)”

Thebeerchaser is delighted with his Happy Healthy Bowl

I’ll supplement the above with my own two visits.  The Happy-Healthy Bowl (a special menu item with a title Thebeerchaser usually avoids….) I had at the lunch was large, delicious and was filled with a bunch of good stuff (brown rice, black beans, mushrooms, Brussels sprouts and roasted fall vegetables. Topped with jalapeño cilantro and guajillo sauce, sour cream and sharp white cheddar)

There was no jealousy on my part as Bernie devoured what he considered to be a great cheeseburger – with a lot of good fries. 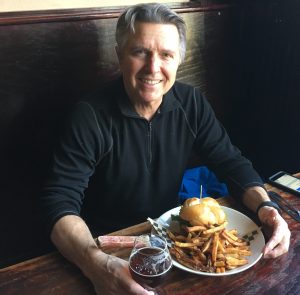 Then when I returned for dinner with my wife, Janet, I marveled at the incredible Fried Chicken and Waffles for $13 (including the slices of bacon in the middle) I even took some of it home for a snack – something which I usually don’t do.  Janet had the Happy-Healthy Bowl at my recommendation and although she thought it was good, did not share my enthusiasm.  And their food prices, especially at Happy Hour are really reasonable.

I enjoyed seeing Bernie Stea again – he has had a career both as a lawyer and an entrepreneur and is one of the brightest and most innovative people I know.  His undergraduate and law school degrees were both from the University of Maryland where he was awarded the Order of the Coif – a prestigious national law school honor society and also served on the Maryland Law Review.  He clerked for Maryland’s highest court before moving to Portland in the early 70’s to practice law.

My first encounter with Bernie was in 1980, when as the Bar’s financial manager, I had to question him about his CLE department budget and he showed up with his Osborne laptop computer with the budget laid out on a SuperCalc spreadsheet.   (Even then, he was an early-adopter of technology.)

As I “attacked” his figures we started a friendly rivalry which entertained Bar staff when we “replicated” the dialogue at all-staff meetings.  It became a staged production in the tradition of Jane Curtain and Dan Akroyd on Saturday Night Live.  After Bernie would make a mock eloquent plea as to why his budget should be increased, my reply was, “Bernie, you ignorant slut!” https://www.youtube.com/watch?v=k80nW6AOhTs

His subsequent career involved work at private law firms, CIO for startups, consulting for high-tech firms, and raising timber in SW Washington.  He and his wife now run a real estate sales and investment firm in Vancouver.  The Carl Group focuses on family estates, green construction and multi-generational housing solutions in the Southwest Washington and Portland metro area. http://natureasneighbors.com/about/ 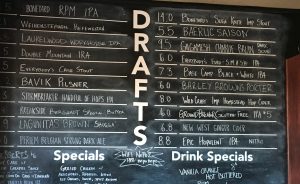 Robust selection of beer from 20 taps

While I have focused on the food to this point, I would be remiss not to mention the twenty-one rotating taps including cider.  Janet had a  BoneYard RPM IRA and I had a Priem Belgian Strong Dark Ale (I grew fond of this beer when we first tasted it at the Pfriem Brewery on a beautiful spring day in Hood River last year.) 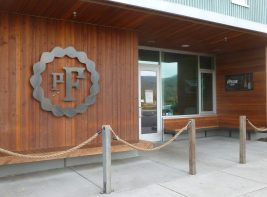 Then we split a Double Mountain IRA.  There was a wide range of beers to satisfy most beer aficionados. Pints were $4.50 at Happy Hour which 3:00 to 6:00 daily.

Other positive factors were free pool, a nice porch in the front which is both pet and kid friendly – not necessarily in that order, enthusiastic crowds and specials for Blazer games.  (You might even see Wesley Walter there on a spring or summer evening……)

The vibe was of a friendly neighborhood pub and the staff including our server, Natalie, was friendly and efficient – something which might not always have been the case based on this Yelp 8/23/16 review:

”Recent staff shakeup has made a fantastic spot even better! The constantly complaining girl with blue hair is gone, and somehow a new dawn has broken! …….“

Janet ready to drop Wesley off at 3 Dogs. He absolutely loves doggie daycare.

And 3 Dogs is a great story in itself which you can check out at their website:

“The business started in 2008 and is owned and operated by Anne Graves, an experience veterinary technician and Michael Lauria, a professional dog trainer with years of experience managing tradition and cage-free dog boarding businesses.”

Although I love dive bars, there are a few neighborhood hangouts which have learned to put together a winning package and are worth visiting.  I echo the sentiments of this final review and urge you to check it out yourself.  And if you have a dog that needs occasional daycare or boarding, go across the street and check 3 Dogs out.   Tell them  that Wesley sent you!

From an article entitled “Meet Me in Cully” Willamette Week 8/22/16:

“An irreplaceable oasis of pub life, NEPO 42 does its best to approximate all bars for all people. Parents bring their children, pets accompany their owners to the front patio, sports fans gather for games, and folks predisposed to hate all of the above may choose from 20 taps of craft beer and cider when filling their growlers.”

A busy and competent kitchen 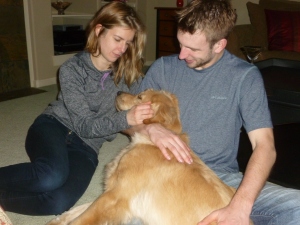