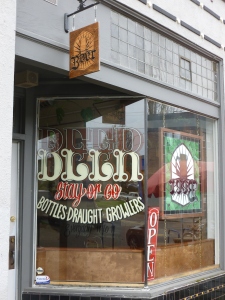 The Entrance to Beer – the Bar

The name of a bar or tavern will often reveal much about the owner or the environment of the establishment.  Such is the case with “Beer,” a new pub opened last December at 1410 SE Stark Street.  Just researching the pub for this blog, shows part of the dilemma.  If one searches “Beer,” using Google, your computer screen will show 556 million possible hits for the term! 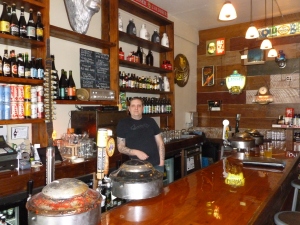 John Stewart, the cordial owner of Beer and Meat Cheese and Bread

Finding their website (there is none) or even reviews for Beer was problematic as the owner, John Stewart, admitted.  He may want to consider this a marketing issue because he has a nice little neighborhood tavern waiting for new patrons and deserving them.

Even the sheet listing the take-out beers, which is extensive, did not have an address or phone number.  In addition, the only visible external sign on the street is very innocuous. 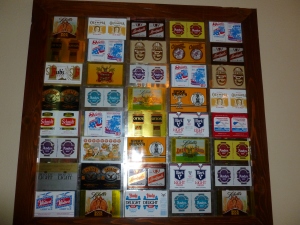 One review suggested just Googling “beer Portland,” however, that didn’t work either although it did reveal that Portland State University is now offering a new on-line course in craft beer brewing. 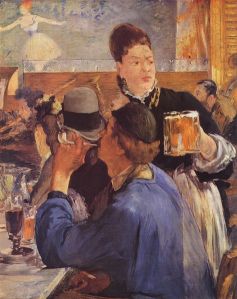 This is not to suggest that naming a tavern to commemorate beer is not virtuous.  As one pundit opined, “One does not solve the world’s problem over white wine.”

That night, I was accompanied by my friend, Portland attorney Jim Westwood, who besides being a veteran and skilled lawyer was recently honored with the distinction of being this blog’s Beerchaser of the Quarter for January – March 2013.  Follow the link to see the write-up which includes a summary of the Portland State College team for the GE College Bowl TV show.  Jim was the captain of that team in the 1960’s.

The intensity of their successful preparation for that show by renowned PSC (now PSU) speech professor, the late Ben Padrow, still had an impact on my drinking buddy that night.  He would periodically hit a glass with a spoon and yell out as the bartender walked by, “I’ll try a toss-up Bob,” (for Bob. Earle, the host of the show.) 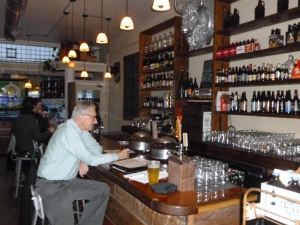 Since there was no one in the bar from the other college to respond, he would then proceed to spout facts about such diverse topics as esoteric Renaissance art, differential equations or landmark Supreme Court decisions.  For example, he queried, Angie the bartender, wondering if the Higgs Boson (God Particle) really “mattered.”  Angie, was appropriately dismissive in her response by asking, “When will the rhetorical questions ever end?”

Beer is a small venue (previously a salon) with only about thirty seats – about twelve or so along the nice long bar, at small tables scattered throughout the long – thin rectangular setting. 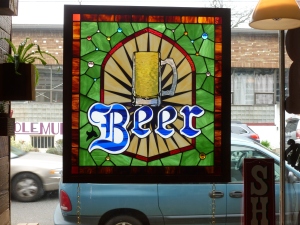 A nice part of the de’cor

They have ten beers on tap.  Jim had a Little Saison from Pfriem Brewery in Hood River and I had a Two Dogs IPA from Portland’s Coalition Brewery (see the link for Beerchaser review.

True to its values, Beer does not serve hard liquor and there is no food served – not a problem, however, since one can order a great sandwich from Meat, Cheese and Bread, the sandwich shop next door, until 7:00 P.M.  John Stewart also owns the sandwich shop and will probably expand hours in the summer.  Food can also be brought in from any of the nearby establishments. 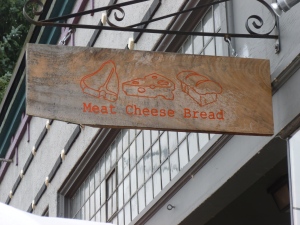 If you don’t care for one of the draft beers, just pick out any of the 80 to 100 bottled beers or ciders listed on their menu.  They are cheaper to take out than drink on site although why not do both? Stewart says that many customers have a pint at the bar and then take some home. 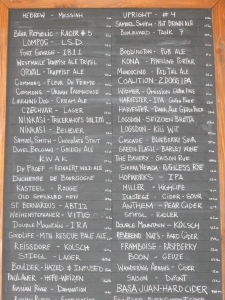 An extensive list of beers and ciders at the bar or to go.

While Beer may be a little bit of a challenge to locate, it is definitely worth a visit.  And while you’re at this sterling example of a Portland neighborhood bar, hoist a mug and toast Jim Westwood, the first Beerchaser of the Quarter for 2013. 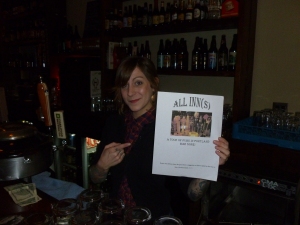 Angie the Bartender with Thebeerchaser logo