The Sandy Hut – A great neighborhood/dive bar – not a restaurant

The outlandish and long purple building known as The Sandy Hut, looked intriguing when I passed it several months ago on the way to review another great Portland dive bar on Sandy Blvd. – The Slammer.

I was also surprised to learn the Voodoo Donuts has a second Portland location – Voodoo Too right across the street.

While the “Handy Slut,” as it is known to regulars and operating since 1923, has been missing for several years from my favorite bar reference guide – The Annual Willamette Drink Guide, the descriptions from these 2008-9 excerpts were still spot on:

2009 – “When people from outside the area—say, writers for The New York Times—think of Portland, they imagine we all look like the eclectic mix of customers at the Sandy Hut. Even post-smoking ban, if you look at the Sandy Hut in the right light, you can still feel the nicotine fog filling every cubic inch of the air.

It’s the sort of place you can wear a leather choke collar and no one will bat an eye, but a full suit and tie will lead to exclusion from the bar’s spontaneous bouts of insanity.” 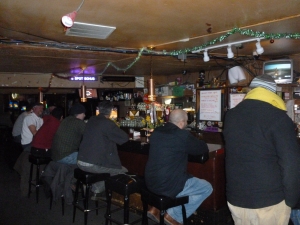 A great group of “regulars”

2008  – “The Handy Slut, as regulars and the bar’s merchandise call it, is a lurid, windowless utopia. It looks like it once housed the Rat Pack—and hasn’t cleaned since the party ended.

Mansfield admiring the Jackie Danger mural on an exterior wall and wondering if it is copyrighted.

One of Thebeerchaser’s most frequent and entertaining regulars, Portland lawyer, John Mansfield, (His firm’s slogan is “Smart Law – Smart Clients!”) accompanied me He was also present at The Slammer, Church, The Ship Tavern and Mock
Crest Tavern).

John, who focuses on Intellectual Property law and litigation, and I always have interesting conversations while raising our mugs, and the Sandy Hut was no exception, to wit: 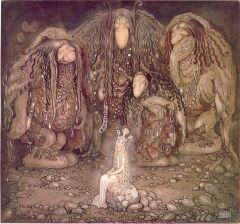 While John deplored the tactics, he did think it would be a kick to attend his next Halloween Party in a patent troll costume.

“Dr. Calvin Rickson, a scientist from Texas A & M, invented a bra that keeps women’s breasts from jiggling, bouncing up and down and prevents the nipples from pushing through the fabric during cold weather.”

The article goes on to state that, “At a news conference, after announcing the invention, a large group of men took Dr. Rickson outside and kicked the crap out of him.” 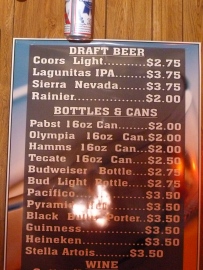 We toasted these gents – me with a $2.00 PBR Tall boy (available all day) and John with a Lagunitas IPA, one of the four beers and one cider on tap at the Sandy Hut – they also have   twelve canned and bottled beers.  And don’t forget about the Jell-O Shots for a buck!

Christopher, our friendly and very well-informed bartender, explained their menu, which includes breakfast, a focus on Mexican food and the old pub standards such as burgers, pulled pork, fish and chips, etc.  They also have a “lighter” menu that starts at 5:00.

Christopher the bartender – helpful and competent

I had a very large and delicious Breakfast Burrito and John, thinking he was going to have to lose some weight to make it into a troll costume, chose the Mexican Wedge Salad – a two-thumbs up option.

Christopher also introduced us to the weekend cook, and touted the guy’s original tamale recipe – which is so popular, they have a brisk “to go” business.

One of the highlights of many dive bars – and The Sandy Hut was no exception – is the patrons and this old, but still accurate, Google Review by Andrew summed it up well: 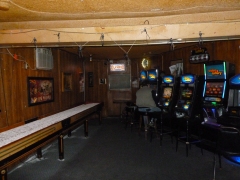 Free shuffleboard and a number of video games

“Is it the dark, windowless dim lighted bar? Is it the jello shots? Is it the shuffle board? Is it the diverse group of people, from hipsters to old locals? (emphasis added) It has to be a mix of all of those factors because this is a great dive bar with a great bar staff and an amazing jukebox. The sum of the parts? A great, great time.”

Kevin – a friendly regular we sat next to at the bar epitomized this.  He welcomed us and stated he has frequented the bar since 1979 when he moved from Phoenix.  He said the bar is filled with people who work nearby or who live in the neighborhood.  “These people take care of you,” Kevin stated – which seemed to include both the staff and the twelve to fifteen people sitting at the bar, including Kevin’s wife.  He said there is a younger group who frequent the bar at night – we were there at about 5:30.

I inquired what the NHRA logo (National Hot Rod Association) was on his coveralls and learned that he is a master mechanic at Gibson Auto and Electric (an independently family owned & operated business since 1983).

It’s a full-service shop but Kevin focuses on Porsches and the computer and electrical systems of other autos.  John and I talked about buying Porsches just so we could attest to Kevin’s good work…..

The Sandy Hut makes good use of its roomy, long rectangular environ and has a pool table, free shuffle-board, a number of video games – including an imposing Golden Tee golf game by Incredible Technologies with a 47 inch flat screen. 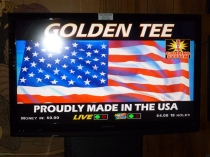 Not a shirt – but you can test your iron play 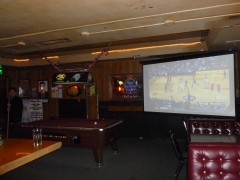 You will also find four TVs including a 100-inch projector screen – which unfortunately amplified the poor play of the Blazers against the Houston Rockets (Lost 101 to 116) when we were there.

And don’t forget their juke box which, “….is internet based, so you can choose nearly any song you want to hear.”

The Juke Box is Internet-based so how about some Count Basie or Benny Goodman??

Thebeerchaser’s Tour of Portland bars, tavern and pubs which started in August of 2011, has visited some great dive bars and the Sandy Hut ranks up there with all of them.

And don’t forget to check out the interesting mural on the outside (see picture above) by California artist Jackie Danger.  It reflects her “edgy and rebellious presence.”