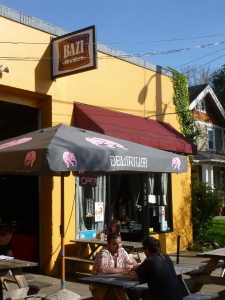 Another one of Draft Magazine’s 100 Best Beer Bars

Bazi Bierbrasserie (Bazi) is another one of the select five Portland taverns which made Draft Magazine’s 100 Best Beer Bars in the USA for 2014.  And Thebeerchaser has done reviews of two of the others in this list – Bailey’s Taproom (reviewed 4/13 – somewhat of a disappointment) and Saraveza (reviewed 3/14).

Bazi was a definite favorite with our group, which included Roy Lambert, Mary Maxwell, David and Kate Dickson and Janet, Thebeerchaser’s spouse.  We typically take a walk before eating and drinking – a great way to get exercise and mitigate the guilt from partaking in pub faire.

And Mary, who prior to retirement in 2009 was the Director of Aviation for the Port of Portland, demonstrated her superior planning skills by charting a superb 2.5 mile walk through the Lone Fir Cemetery and Laurelhurst Park on a rare, beautiful spring day.

Perhaps this should be labeled “The Beer Walk”….

Strolling through the Lone Fir was very interesting and we learned about the ties with Portland’s Russian community – as evidenced by many of the family plots with pictures engraved in the stone monuments.

” ….Russian immigrant graves  which are distinguished by colorful plantings of genuine, live flowers, creating a patchwork of color among the somber greens. The Russians are particularly fond of a kind of black granite which they have laser-etched with their likeness and, usually, a highly romantic scene. (Flickr – “Dead Man Talking”)

For those interested in Portland history, Lone Fir Cemetery “….reads like a good book, telling the story of the many eras of settlement and development that have transformed the Portland area since the cemetery was founded in 1855. This 30-acre property is the resting place for more than 25,000 people, including famous Portlanders with names like Lovejoy and Hawthorne. Visitors will also find notable trees and shrubs, giving Lone Fir the feel of an arboretum.” (Metro website) 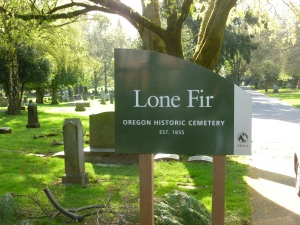 We then walked through Laurelhurst Park, which on one of the first nice days in many moons, teemed with people and activity.  The 27 acre park was purchased by the City of Portland in 2011, and in 1919, the Pacific Coast Parks Association named it the “most beautiful park” on the West Coast. It was also the first city park ever to be listed on the National Register of Historic Places. 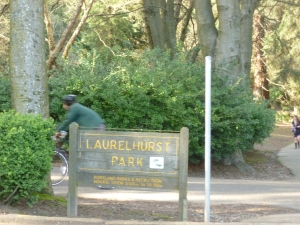 Although the walk was great, the biggest treat was still to come – drinks and great food at Bazi.  And it was evident by the total experience why this bar made Draft’s Top 100 list.

The beer selection is extensive, the staff is knowledgeable and the food really good.  “Bazi is a Dutch word for lovable crook or scoundrel….Bierbrasserie is a noun used in Flemish Belgian to describe establishments that have great food and a killer beer and beverage selection.” (Bazi website)

The Portland Barfly summary is apt: 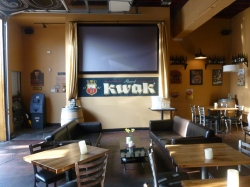 A great place to watch Timber (or Blazer games.

“Suds snobs rejoice! This friendly Hawthorne neighborhood hang has more than 15 Belgian-style brews on tap, including locals like Double Mountain, Pfriem, and Commons. It’s a dandy spot to watch Portland Timbers games on the 119″ big screen, and the food is surprisingly awesome….” 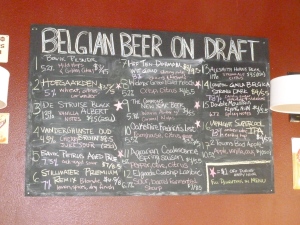 An extensive selection of Belgian beers.

One of the distinguishing features for Bazi is its management –  Hilda Stevens is the owner.  I was surprised to find while researching before my visit that she responded to many comments from sites such as Yelp and Trip Advisor – most notably, the critical ones – which often times are really trite and unwarranted.

Hilda, the owner, (holding the logo) with our group.

An example was a complaint on Yelp, by a customer who thought the food service was too slow:

“Thanks for taking the time to write. Can you let me know when you visited recently that you experienced slow service?….

I’ve also been monitoring our food tickets and they’ve been in the 5-25 minute range. Considering we make everything from scratch that’s within industry standards. The more information you can send me as to your recent visit the more valuable it will as I investigate the situation. Thank you again for being a return customer. I value everyone’s feedback, but specially those who continue to support us.” Hilda

I have to admit, given the ongoing success of the bar, which opened in May, 2011, and was an immediate hit and the moniker, “Hilda,”  I was expecting the proprietor to be a much older person.  When we chatted with her, however, we met a delightful, young entrepreneur, who was raised and went to college in Texas.   She traveled extensively in Europe and did a bunch of research – most notably on Belgian beers.  She completed her Masters’ Degree at Oregon’s George Fox University and developed a smart business plan – to specialize in Belgian beers – and capitalize on service and quality – this was evident.

The bar at Bazi 1906 reclaimed wood from the Jim Beam distillery in Lexington, Kentucky!

Our server, Sydney, was also very knowledgeable and offered specific and detailed comments on several of the seventeen beers on tap, which helped in our selection – we tried a few including Oakshire Frederic’s Lost Arm Farmhouse Ale and the Bavik Premium Pilsner – all very good.

In retrospect, given the superb selection, we should have done a flight of four 5oz. pours ($10 Domestic and $15 Imported.)

Given the outstanding line-up of handcrafted cocktails, Thebeerchaser also tried the $5 Happy Hour Cocktail which that day was “Sleepless in Oostende” (Jim Beam, lemon and orange juice and orange bitters.)  The cocktails are named after Belgian cities.

Oostende is a Belgian city located in the Flemish province of West Flanders.  The “sleepless” reference might result from worry that the series of the dikes that keep the North Sea from flooding this town would fail.  Or perhaps it is in recognition of the City’s guards during The Siege of Oostende (1601 -1604) of which it was said that “the Spanish assailed the unassailable and the Dutch defended the indefensible”  (Wikipedia).  The siege resulted in 80,000 combined casualties – the single bloodiest battle of the Eighty Years’ War.

Bazi also has an extensive list of bottled beers and ciders, a nice wine selection, a bunch of hard liquor selections you can get by the shot, and you can also fill your growler. 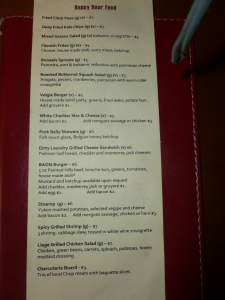 You can see from the picture that they have a robust Happy Hour menu.  The Baon burger, fried chick peas, brussels sprouts, veggie burger and most notably, the Stoemp (Yukon mashed-potatoes and veggies) were all scrumptious.

Great food – made from scratch….

The patio was full that day and it was obvious that it was both dog and family friendly.

As stated in the most recent Beerchaser post, I have conceptual difficulties with rankings; however, having visited five of the eight Portland bars making the Draft Magazine Top 100 Beer Bars in the last five years, Bazi is my favorite so far.  (The Horse Brass Pub (reviewed in 5/13), Concordia Ale House, the Green Dragon and Imperial Bottle Shop have also made the list in prior years.)

And when you visit Bazi, try a walk in the park and a stroll through the burial grounds – it’s a hike with a plot! 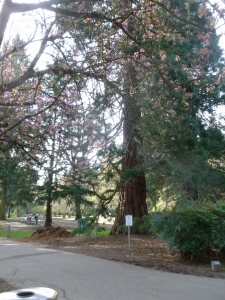 (To view the map with all the bars reviewed by Thebeerchaser, click on the “View Larger Map” link at the bottom of the map below)

12 thoughts on “Bazi Bierbrasserie – More Than Just a Walk in the Park!”