Although the power and prestige of England have diminished since the days of Admiral Nelson’s exploits for the Royal Navy in the 18th century and Winston Churchill’s fiery oratory during World War II, one is reminded of the superiority of the Brits when it comes to pubs.

It is doubtful that English poet, John Milton, was referencing drinking establishments when he stated in 1643, “Let not England forget her precedence of teaching nations how to live”.  The Horse Brass Pub in Portland, however, does a wonderful job emulating the classic English public house and is worth a visit by every Portlander. “Arguably, holding the title of Portland’s best bar since in opened in 1976…It’s a tribute to all thing English.” (Willamette Week’s 2012 “Our 105 Favorite Bars, Pubs and Clubs.”)

Sign at the Entrance to the Horse Brass Pub

Along with five other Portland bars, the Horse Brass Pub (HPB) made the honor roll of the 2012 Draft Magazine’s “One Hundred Best Beer Bars in the USA”:

“….Founder, Don Younger…claimed, ‘If it were any more authentic, you’d need a passport,’ he wasn’t kidding….Bric-a-brac adorns the nicotine-stained walls (from the old smoking days) of this dimly-lit, wood-paneled pub, perfectly recreating the neighborhood haunts of England….

HBP has championed the craft beer movement since 1976, and with its legacy still intact as perhaps the best bar in the nation, it isn’t just a destination in Portland, but a bucket-list item for any beer lover.”

My San Francisco friend and consultant, Dave Hicks, and I hit the HBP for dinner and then traveled a short distance to another one of Draft Magazine’s 100 Best – Belmont Station (See Beerchaser Review posted on 4/17/13)

Hicks has traveled all over the world and commented on the authenticity of the pub except for one missing element — pervasive smoke which permeates the Anglican pub environment — or at least used to before the House of Commons passed a smoking ban in 2007.

Based on the 2009 expansion of the Oregon “Smoke-free Workplace Law bars and taverns could no longer permit smoking on or within ten feet of the premises.  We are confident that the cigarette lobby at the time, taking lessons from the NRA in opposing reasonable legislation, maintained, “Cigarettes don’t kill people.  It’s the tars, and toxins in the smoke.”

Nevertheless, this law had a dramatic impact on the environment within such establishments as the Horse Brass Pub as can be evidenced by these excerpts from my favorite annual Willamette Week resource on bars:

“Surgeon General’s Warning:  Smoking causes lung cancer, emphysema and shriveled testes.  (The new law) also leads to outdoor drinking, rain or shine, which can lead to frostbit, melanoma and accidental arousal from rubbing against another addict while taking refuge under a tiny awning….”  (“2009 Drink Guide”) 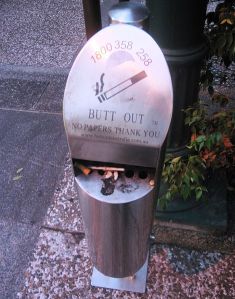 “There used to be two types of customers here (HBP): smokers and chain smokers.  The 2009 smoking ban devastated regulars. (They all died said a bartender).“  (“2011 Drink”)

“We worried that (the new law) would spell the end of …(the) venerable Brit Pub…Not because the 33-year old bar…wouldn’t retain its loyal patrons, but because we assumed its billowing, milkshake-thick clouds of cigarette smoke were load bearing structural elements of the building without which the sprawling pub would collapse.”  (“2009 Drink Guide”)

“What will become of Don Younger’s sprawling pub in 2009?  After the encyclopedic beer list and heart-stopping English breakfasts, this slice of Britain on Belmont is best known for air so thick with smoke, you could bottle it.”  (“2007 Drinkers’ Bible”)

Another often-cited difference in beer served in the US and the typical English tavern is the temperature of the beer.  For example, Hicks and I had wonderful chilled mugs of Portland Brewing’s Rose Hip Gold and Caldera Brewing’s Dry Hop Orange, which if served 4,928 miles to the east, would not be quite as frosty.  (Although it is a misconception that British beer is served warm, beer in the UK is usually served at cellar temperature – 50 to 57 °F. – Wikipedia).

This is not to suggest that English beer is bad as exemplified by this commentary from Voltaire on both British citizens and their beer:, “They (the British) are like their own beer; froth on top, dregs at bottom, the middle excellent.”

The 50+ different beers on tap at HPB, including 28 rotating or guest taps, create dissonance for an indecisive drinker.  They reflect what was purportedly Don Younger’s motto, “It’s not about the beer.  It’s about the beer.”

A Valuable Resource for Thebeerchaser Tour

As evidenced above, an important resource for this blog is the Annual Willamette Week Drinkers’ Bible or Bar Guide.  Indeed, Thebeerchaser’s printed copies for the last five years of this annual list of favorite Portland bars is a valuable resource.

The enormity of the challenge of a comprehensive tour of Portland bars, pubs and taverns hit home when I read the 2013 publication.  WW listed 121 favorite bars visited in the last year.  This compares with 41 establishments since Thebeerchaser blog commenced in August 2011.

Of WW’s favorites, Thebeerchaser has only frequented nine to this point as shown below:

* Visited, but not yet reviewed and posted on Thebeerchaser blog.

To quote Alfred Lord Tennyson, “So much to do, so little done, such things to be.”

The rich history of the Horse Brass Pub, established in 1976, can be found on its outstanding website and gives a more thorough chronology than can Thebeerchaser, but the decades of founder, Don Younger’s impact, are evident throughout.  His dedication to the fledgling craft beer industry in Oregon is his legacy.

It would be a stretch to label the food as “outstanding”; however, the menu is extensive and offers numerous English-type options.  My bangers and mash were good and ample and Dave Hicks had a similar reaction to his steak and shepherd’s pie.

And oh yes, before ending the review of the Horse Brass Pub, a recurring theme on this blog bears iteration.  Just as with the Ship Tavern and Jakes, the HBP was purportedly the scene of a simultaneous gathering of approximately twenty Portland police cars one summer night in the ’80’s.

Members of the Portland Rugby Club and the team from New Zealand they had defeated in their match that day, capped off the day with food, drink and “revelry” — Film at 11:00 ….!

6 thoughts on “The Horse Brass Pub – Pinnacle of Perfection”