The third day of our Beerchasing sojourn on the Central Oregon Coast, we headed south from Lincoln City to Newport along beautiful Highway 101.  Dave, seeing the boiling foam from the surf stated, “That reminds me of the suds on a brewski and I’m looking forward to a beer.”

Our first stop was the historic Bay Haven Inn in Newport – a sanctuary over the years to many fishermen and loggers and also the set for the Snag Saloon in the Ken Kesey movie, “Sometimes a Great Notion,” filmed in Newport in the early ’70’s.  The establishment originally had an inn on the second floor – long gone, but the name of the bar has never changed.

Steve, the bartender who has worked there for three years after moving from Montana,  was friendly and helpful in telling us about this classic watering hole – he also shared some scrumptious smoked salmon – worth the trip to Newport alone. 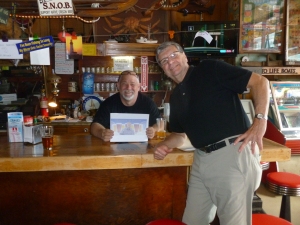 We viewed the varied artifacts in the bar and absorbed the ambiance artfully described by Matt Love in his Letitpour Blog review from the 1990’s:

We also admired the sign which said, “I’ve been fishing so long, my worm is getting Social Security.”

The Bay Haven is also the only bar I have visited in almost 100 venues, that had a horseshoe pit in the back – and there was an intense game in progress at 11:00 in the morning.  No corn-hole contests for these patrons!

Steve told us that during rowdier times, the pit is closed as the horseshoes can become lethal weapons with some inebriated patrons – something that could happen if one guzzled a few of the featured Bay Haven cocktails including the Dead Nazi – (1 oz. Jagermeister + 1 oz. Peppermint Schnapps) a bargain at $6.

Prior to three years ago, they did not serve hard liquor – evidenced by the sign captioned, “Soup of the Day — Whiskey.”  They also have a full menu.

Horse-shoes – Potential lethal weapons for those with blurred vision

A final story (“The best drinking hole story on the Oregon Coast for all time…”) from Matt’s blog that should be told, relates to Paul Newman, who directed and was the star of the aforementioned movie:

“….with the cast and crew of the movie staying in Newport, the man (who told Matt the story) drank in a dive tavern in the rugged timber town of Toledo, eight miles east……Enter Paul Newman carrying a chainsaw, exactly like the hard-ass logger character, Hank Stamper, he happened to be portraying…….

Wordless, alone, Newman, who according to various biographies……has at times drank to considerable excess, fired up his chainsaw.  He sawed the legs off the pool table.  It crashed to the floor.  Stunned logging locals looked on.  They did nothing.  Newman left, perhaps later sending a check to cover the damage. Perhaps not.” 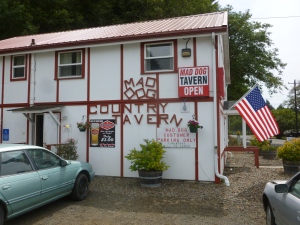 We traveled a few miles up the road along Yaquina Bay to Sawyers’s Landing and a delightful and idiosyncratic venue with a name that belies its history.  On the way, Steve saw a fishing boat and said, “Fishing reminds me of hoisting a brewski with friends, I’m looking forward to a beer.”

And when we sat down at the bar in the Mad Dog Country Tavern, Steve immediately ordered a Sessions – which he fondly described as, “Like Coors Light – only with body.” 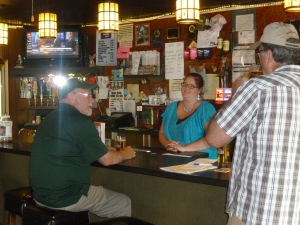 Pauline, another of many cordial bartenders we met on the coastal journey, has worked at the tavern for 3.5 years.  She told us that her “regulars” are people from the adjoining RV Park, summer tourists and Newport residents.

Pauline’s story on the origin of the name of the bar – about 50 years ago –  was similar to Matt’s, but given his diligence with historical details, we will defer to the Letitpour.net blog account:

“….Years ago, a large log rested in front of the tavern.  It has seatbelts attached to it.  In some sort of contest, certain patrons would strap themselves in and then proceed to consume a bottle(s) of a particular brand of fortified wine.  The “winner” remained sitting upright.  Thus Mad Dog Tavern.”

While we drank our beers and considered how long the pickled eggs and Hot Mama sausages in the jars had been fermenting, Pauline told us other stories.  One was about the wake for one of the regulars named Brenda.  Based on septic tank issues, all of the toilets in the bar backed up the day before the gathering, so they ordered 3 porta-potties, which “accommodated” the mourners that afternoon.

We sat stunned as a resident from the RV park next door came in, ordered a beer and asked Pauline for his “envelope” which she retrieved from the safe and counted out $125 in cash.  He sat down at a video poker machine and about 30 minutes later came back and said he needed the envelope again!

Aside from this one negative, Matt Love’s description stands, “The Mad Dog is so perfect and perfectly American..maybe not for the Drys, but definitely for us wets.”

After a good lunch at Ocean Bleu Seafoods and a walk along the Newport Bay, we made our last Newport stop – an innocuous little bar named Hoovers Bar and Grill – just south of the Yaquina Bay Bridge on Highway 101.

We noticed an interesting portrait of a women with a semi-exposed breast – allegedly given to the owner by Gracie, the founder of the Sea Hag Restaurant in Depoe Bay and a sign promoting their jello-shots stating, Jello isn’t just for kids…,” , We then were fortunate to hear the history of the bar related by Amy, the granddaughter of the owner. 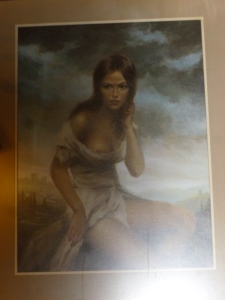 Evidently, the building became Alice’s Tavern in 1978, but that was after the mini-mart, gas station and petting zoo with a live alligator and black bear was decommissioned.

We listened in fascination to a fellow sitting next to us at the bar from Minnesota arguing in a heated cell-phone conversation that he had been promised a gig on a NOAA ship out of Newport as first mate.  We also sat appalled as a kid who couldn’t have been more than 18 or 19 sitting right behind us, burned through $70 on a video poker machine in no more than 15 minutes.

Oh yes, another intriguing sign appeared to be a dated – but authentic – advertising Caroline’s Topless Charter Service,  – a former Newport “sport-fishing” option that offered three-hour expeditions for $75 and all-day trips for $100.  Perhaps this approach to “bosom fishing” ran its course, because the bartender told us they were no longer in business.

We headed north, and since to that point I had been the designated driver, I said after seeing a pool of stagnant water along the road, “That reminds me of PBR and I’m looking forward to drinking a beer in Depoe Bay.”

We decided to pass on an option to stop at O’Downey’s Irish Pub in Depoe Bay based on the premise that Sheperd’s Pie and Irish Stew might be not be a coastal culinary special, but found our way to a wonderful, albeit dilapidated building just north of Depoe Bay housing The Tide Pool – a former video store and laundromat – now a great dive bar.

Maybe in Dublin, but not in Depoe Bay….

Our bartender was Vicki – also the owner – and she was emphatic about her pizza being the best on the Oregon coast.  Dave and Steve agreed and their order was faster than the sign posted by the kitchen i.e. “Same day service on most food orders…”

Both of them got into the spirit by purchasing Tide Pool t-shirts.  Vicki told us about going to “Take Your Kid to Work Day,” when she lived in Iowa as a child and her dad worked in a slaughter house…… 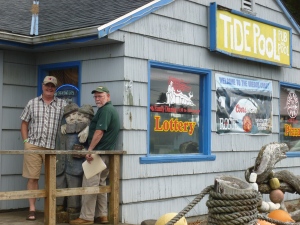 The mementos and brick-a-brack in the bar was superb ranging from artifacts such as a huge dead lobster from the former Depoe Bay Aquarium to a life raft recovered from the New Carissa, to a picture of three bare-breasted nymphs – a recurring theme in the bars along the coast although perhaps these had been employees of the now defunct Carloline’s Topless Charters.

As Matt Love opined in his blog post, “What a joint!  For starters it was practically a labyrinth with all sorts of weird angles, alcoves and passages.”

This included a narrow passage into the video poker and pool room – in which there was a second bar and a battered, legless, facially tattooed, mustached mannequin in a bright red shirt stood guard.

But perhaps the highlight was what Matt described as “a salt-water glass coffin called the Tank of Death.  It is packed with all manner of marine creatures caught by local fishermen who bucket in their curious finds and dump them in.  Eels, crabs, sea bass, perch, Dick Cheney, octipi and urchins all end up in the mix……….

Beware — The Tank of Death!

The Tide Pool was one of our favorite watering holes and one to which we will return.  And thanks to Matt Love’s outstanding blog – Letitpour.net – which has not lost its value even though not active anymore. 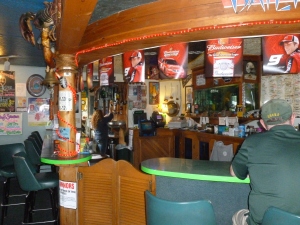 Filled with a strong appreciation for the tales and history of the Oregon Coast, we headed north to Lincoln City for dinner – it was Senior Night at the buffet at Chinook Winds Casino…. 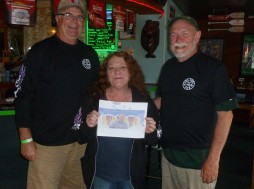 Buying into the program…..