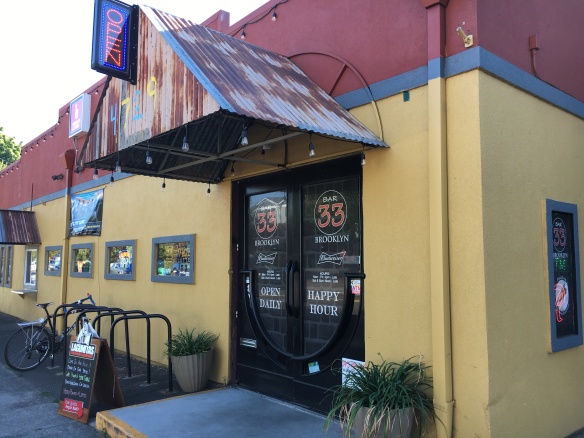 What draws a person to watering hole?   Having visited over 250 bars, taverns and breweries in the last seven years of which about one-half were in the Portland area, I feel reasonably qualified to opine….. 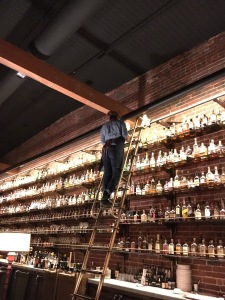 In some cases, it might be the extensive tap list or whiskey labels.  Examples might be Bailey’s Tap House (24 rotating taps) or the Multnomah Whiskey Library (1,500 different labels) both in downtown Portland. (Click on the link to see Thebeerchaser review of all bars mentioned in this post.)

I would suggest, however, that when one confronts more than fifteen or so drafts or ten labels of Scotch, the incremental magnitude of the drink menu becomes somewhat irrelevant (as long as PBR is one of the drafts….). 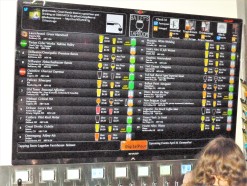 Bailey’s Tap List – how many drafts does one need?

In other cases, it might simply be economics.  A good Happy Hour with $1.50 PBRs or cheap but strong cocktails can garner a loyal group of regulars.

At Gil’s Speakeasy, their claim to be “The Nicest A-holes in Town,” might just be correct, and the cheap beer is supplemented by a daily food special such as a $3 chili dog (Saturdays) or three tacos for a buck on Mondays — that’s also Dirty Bingo Night!. 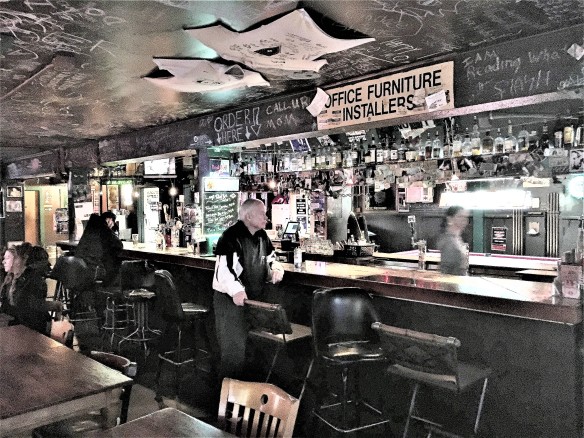 Or maybe it’s just the attraction of an ice-cold Hamms on tap for a buck  – all day each Wednesday.  That’s the case at The Standard.  It’s a NE dive bar which Mathew Korfhage, the fabled (and now former) bar reviewer at Willamette Week in the WW 2017 Portland Bar Guide described as:

“….cheap, no-nonsense fun in a way that takes all comers and yet is loving towards its long-time regulars.  These days in Portland that makes The Standard not very standard at all.  It makes it a GD treasure.” 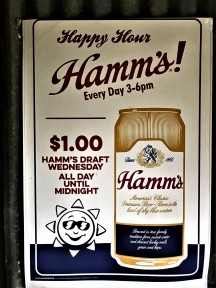 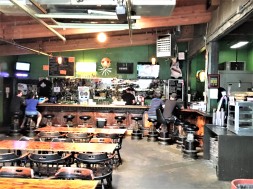 The Standard – “A GD Treasure.”

While I could go on for pages on other criteria drawing one to a bar, I will complete this list by adding the critical factor of ambiance or character.  It’s where an establishment as you walk by beckons you – like the Sirens in Homer’s Odyssey. 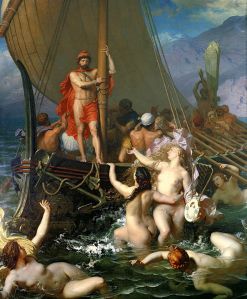 Odysseus and the Sirens from Homer – tied to the mast…..

Maybe it’s the engaging and cordial staff or the friendly regulars that radiate a welcoming atmosphere that pervades the place like smoke from the Taylor Wild Fire in the City of Grants Pass.  (And before Oregon’s Smoke Free law passed in 1981, most dive bars had the same Air Quality Index reading…)

My favorite Portland examples are the Dockside along the Willamette River in North Portland or Cracker Jack’s Pub in NW.  As you walk out the door, you are already planning your next return trip….. 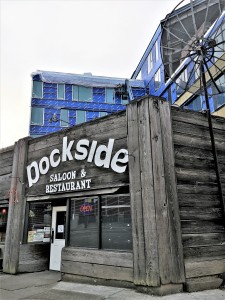 The Dockside – a hidden gem

Or perhaps its the idiosyncratic layout with an eclectic mix of red booths and scattered tables, classic pinball games and memorabilia including old beer signs, deer antlers, tacky but “timeless” art and placards with quotes such as these two from the historic Bay Haven Inn in Newport:

“I’ve been fishing so long, my worm is getting Social Security.”

“Soup of the Day — Whiskey” 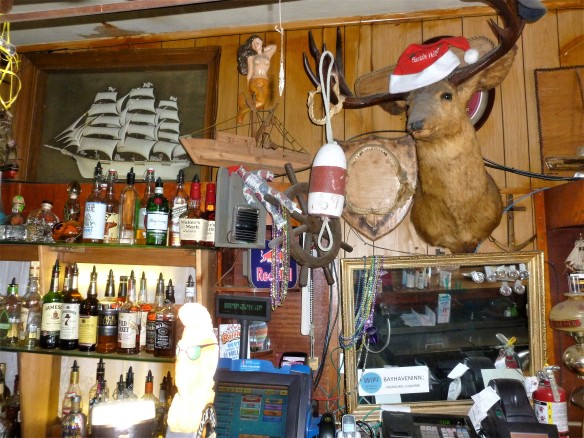 The Bar at the Bay Haven Inn – established in 1908

One of the most memorable examples is the Tank of Death at the Tide Pool Pub in Depoe Bay on the Oregon coast where Vicki, the owner, will tell you about going to “Take Your Daughter to Work Day” in Iowa, when her dad worked in a slaughterhouse and meat-packing plant. 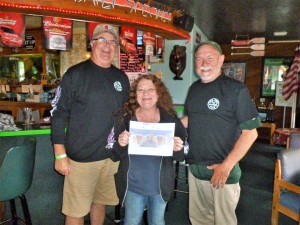 The Tank of Death is graphically described by former coastal bar blogger, (“Letitpour.net”) Matt Love, as:

“A salt-water glass coffin called the Tank of Death.  It is packed with all manner of marine creatures caught by local fishermen who bucket in their curious finds and dump them in.  Eels, crabs, sea bass, perch, Dick Cheney, octopi and urchins all end up in the mix………. 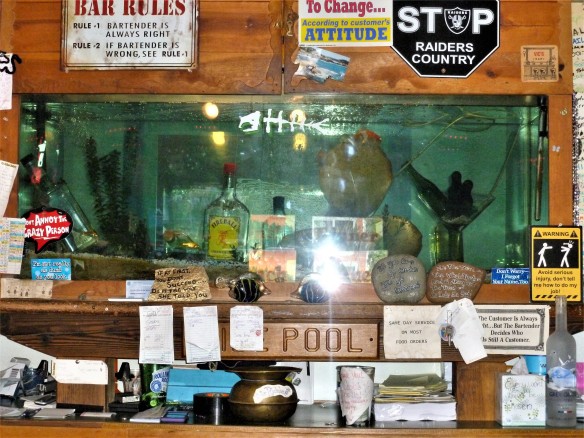 The Tank of Death – a “Roman arena of savagery and merciless predation…. 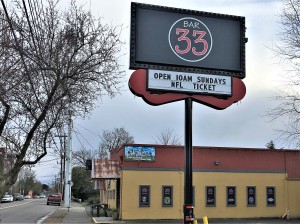 But I digress (considerably) with this 700 word introduction to Bar 33 – Brooklyn.  Perhaps, it’s my frustration with a bar that looked like it might be a very interesting site to meet some new people and experience the engaging climate that has typified a majority of the barrooms I have frequented on Thebeerchaser’s Tour of Bars, Taverns and Pubs.

However after three separate visits, I left with the sentiment:

“Visit it for a mug of one of the ten drafts and to hear a good Van Morrison song from a decent juke box.  But then move on to an establishment where you will want to return – maybe even invite your mom to visit.”  (And a number are not far from Bar 33 – see below) 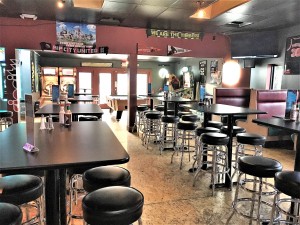 Now it’s not because of lack of amenities – the bar is pretty spacious and has an attractive back bar.

There are a number of games such as Big Buck Hunter and even two Skee Balls, an electronic juke box, a number of big screen TVs, a pool table and an expansive albeit unspectacular patio with a fire pit that would be nice for a summer afternoon – dogs are welcome.  There’s also a large parking lot. 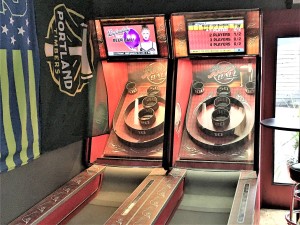 Most of the social media comments are above average although there are not that many reviews.  But on my visits, the bar had no vibe or energy – admittedly a subjective judgment and I might make a return trip on a weekend night to see if that helps. 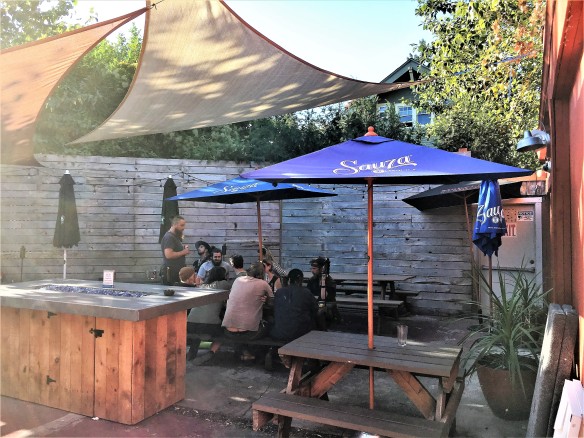 Part of the problem is they have no web site – nor does their sister establishment Bar 33 – Gresham.   And their Facebook page has very intermittent material.  For example, besides a post on September 2nd announcing, “Thursday Night Football is Back,” the most current posts were on June 20th and April 18th – both for free comedy line-ups. 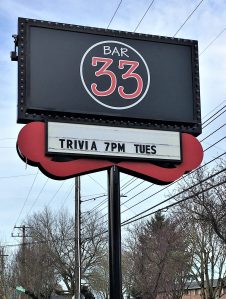 And evidently they have Karoke on Saturday nights and Trivia Nights, but unless you are a regular or see their sign, that information probably passes you by.

The last “events” advertised on Facebook were from December 15, 2017 launching their new menu and happy hour (no details were included) and live music by the Still River Drifters on October 14th. (The last entry on Bar 33 – Gresham Facebook page was posted on 2/27/17.)

A person answering the phone on 9/3/18 said, “We don’t have live music any more, but we’re looking into it.”   Since they had an empty popcorn machine in the bar, I also asked about this and he responded, “We no longer have free popcorn.” 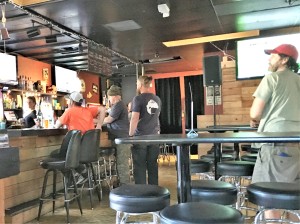 The bartender on my visits was efficient, but preoccupied even though there were few people in the bar (you order food and drink at the bar).

The background info I got on the bar came from on-line research where I learned that the building’s predecessors were a Chinese restaurant named Yummy Garden  and more recently a Salvador Molly’s. (Sellwood Bee 12/24/18)

I assume that like the Nineteen 33 Taproom in the Willamette section of West Linn – a great pub Thebeerchaser reviewed in February 2017 – the name of Bar 33 is derived from the monumental year in US history, when Prohibition – the 18th Amendment was repealed and replaced by the 21st Amendment after a failed fourteen year fiasco.  However, one would never know otherwise the derivation of the name. 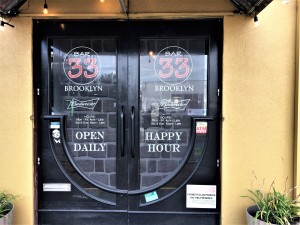 And the co-owners evidently have a hospitality background:

“After years of working in the bar, brewery and restaurant industry, Owners Jeff Pochop and Jake Whitney decided to work for themselves.

Opening Bar 33 Gresham in 2011, Jeff and Jake are now on their fourth location.  Including Pastimes Sports Bar & Pizza in Fairview, Oregon and a small deli in Lebanon, Oregon.” 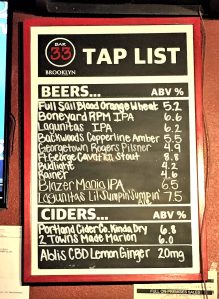 Besides the good Backwoods Copperline Amber I had, the other redeeming factor on one of my visits to Bar 33, was raising a mug with Larry Frank. 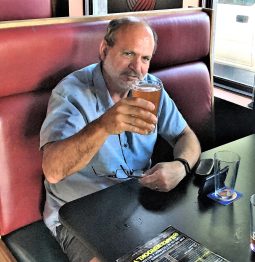 Larry is a recently retired VP and Associate Legal Counsel for Standard Insurance.  A Lewis and Clark Law grad and University of Iowa alumnus, he is an outstanding lawyer and a great guy.

We can applaud Pochop and Whitney as entrepreneurs, but Bar 33 – Brooklyn has a lot of unrealized potential in Thebeerchaser’s humble opinion.   If you want to check it out it’s located at 4729 SE Milwaukie Ave – just north of Sellwood. 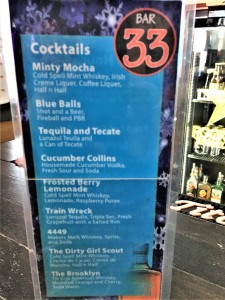 And maybe you will find a different environment than id did; however, I would suggest that after a quick beer there or one of their cocktails which seemed reasonably interesting, you spend the bulk of your time at one of the following:

The Brooklyn Park Pub, (2 minutes or .7miles) the first stop on Thebeerchaser’s Tour in 2011, where one of Portland’s best bartenders, Phoebe Newcombe will serve you beer in a Mason jar and make you feel very welcome.  You can also ask her about the Brooklyn’s iconic Whiskey Club. 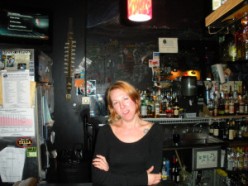 Phoebe at the Brooklyn Park Pub – a class act..

Or you could check out The Muddy Rudder (6 minutes or 2.1 miles) on the east side of the Sellwood Bridge, which definitely does have live music and a great environment. 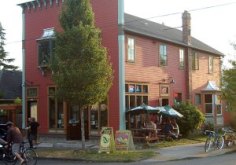 Chart a course to the Muddy Rudder

Then there’s the Ancestry Brewery’s Taphouse (5 minutes or 1.9 miles) at 8268 SE 13th Ave where you can have a pint of their flagship beer – Best Coast IPA and some outstanding beer-battered fish and chips. 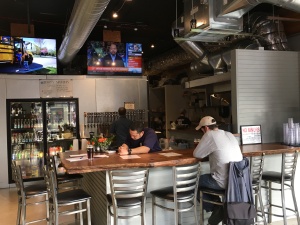 And if you want some exercise, just south of Bar 33, you can take the trail for 1.1 miles along the Oaks Bottom Wild Life Refuge to the Lompoc Brewing’s Oaks Bottom Public House.

You will walk through an urban wetland popular with bird watchers and full of other critters including beavers, otters and cranes (not the construction kind although there are plenty of those in Sellwood lately.) 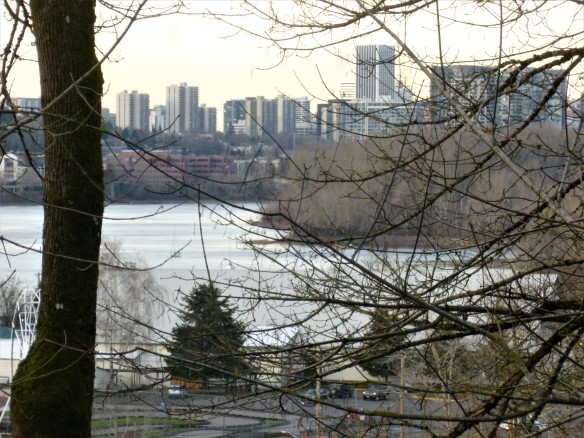 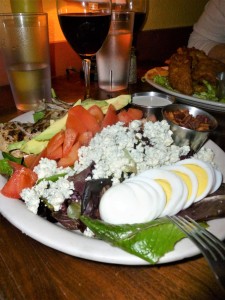 A “must” at the Oaks Bottom Pub

In the living room environment of the Pub, you can have a fantastic Cobb salad and a pint of their outstanding Proletariat Red Ale.

Now, there’s even a new brewery only 3.3 miles away – Ruse Brewing, whose co-owners and brewers, Shaun Kalis and Devin Benware, at least from their website and some early reviews, seem to have the passion which appears to be missing from the aforementioned co-owners:

“We brew small batch, flavorful, and thoughtfully-crafted beers. We work with local artists and musicians to design beers paired with their art for concept events and beer releases. Our community is a major inspiration for our company vision, we will do what it takes to be involved and support other businesses and organizations.”

Ruse will be a stop on Thebeerchaser’s Tour in the next few months.

Now this is the first review of over 200 blog entries, in which I have set forth more words talking about other establishments than the focus of the post.   I can defend that, however, because all of the others mentioned above, captivated the imagination regardless of what time the visit or how many people were in the bar – not the case with Bar 33.