Thebeerchaser outside NW Portland’s Crackerjacks Pub – probably his favorite bar on the Tour to this point!

Since the inception of Thebeerchaser’s Tour of Bars, Taverns and Pubs in August 2011 I have had the pleasure of visiting and writing-up sixty-nine Portland establishments.   And what was originally intended to be posts about the history, regulars and distinguishing characteristics of watering holes strictly within the Rose City, transformed into an expanded mission based on our retirement travel.

These trips resulted in visits to 97 additional saloons in Europe, Alaska, the Southeastern US, Montana, Wyoming, Washington and central and eastern Oregon and the Oregon coast described in Thebeerchaser posts.

Besides being able to list the alehouses visited, as a tool for Thebeerchaser followers and visitors I have now categorized those Portland watering holes by sector of the city for those who are looking for a place to raise a mug in a certain geographical area.

They are broken down into Northeast (10 bars), Southeast (23 bars which includes the fabled Barmuda Triangle)  North (11 bars in the vicinity of Mississippi, Killingsworth and Interstate Avenues and St. John’s), Northwest (13 bars) and Southwest (10 bars which includes downtown or the Central Business District and Multnomah).

There was one bar in the suburbs (Brannons in Beaverton which unfortunately is now closed) and the Pedalounge – a traveling chariot which visits several bars on its amazing tour of Southeast Portland.  Towards the end of this post, the bars and brewpubs outside the Portland area are listed.

The 2016 Addendum is enumerated at the bottom of this post.

How to Use this Chart

If you are interested in finding more about one of the taverns on the list below, there’s two ways to do this:

In the second column on the listing below, you will see the year and the month of the post for the bar.  On the right side of your computer screen, you will see an enumeration of the years and months of all the Beerchaser posts.  Click on the month to get to the write-up. There may be several posts that month so you might have to screen down.

Just go to the upper right corner of your screen and enter the name of the bar in the search field and those posts were it is mentioned should show up.

*1 Franks Peters’ Grand Café closed in 2014 and Pour Sports has now opened in the historic building.

*2  The historic and iconic Slabtown closed in 2015 and unfortunately has not reopened.

The Dicksons, Lamberts and McAdams at Produce Row

And in closing this post and 2015, it needs to be stated that besides the adventure of exploring so many new and interesting saloons, it has been wonderful meeting the bartenders, the regulars and sharing stories with those who have Beerchased with me. 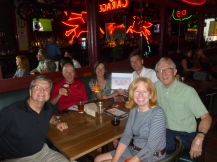 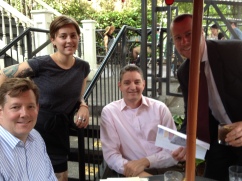 And finally – a special thanks to the 2014 Beerchaser-of-the-Year, Janet Williams, my spouse of 35 years who has good naturedly switched from wine to beer when we have visited watering holes in Oregon and all over the U.S. and Europe.

4 thoughts on “53 Months of Thebeerchaser’s Tour – Where we’ve been and you should go!”