I would suggest that 2017 was a year of good cheer – but isn’t that what you would expect from the author of a blog entitled “Thebeerchaser.”  While there were national and international events which make me shudder, the following speaks strictly to my idiosyncratic retirement hobby i.e. visiting bars, taverns and pubs and then blogging about them.  The following is my rationale for asserting, “It was a very good year.” 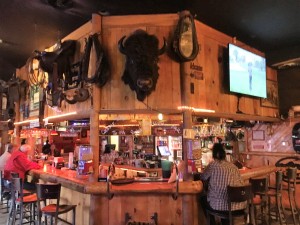 Blog Statistics – while I would still pursue this hobby even if the only people reading my posts were family members (out of a sense of obligation), it is gratifying to see that the number visiting the blog has increased – a lot – each year from my first full year in 2012.

The chart below shows the total number of views with the darker blue being the number of visitors each year.

Since its inception in August, 2011, I have published 189 posts – each one averaging about 1,500 words.  In 2017, followers of the blog saw twenty-nine posts, which is pretty close to the annual average over the six full years I have been on this “Tour.”   But in 2017, since we were on the road more, we visited more different public houses than in any prior year.

Wonderful scenery (and breweries) along the S. Oregon Coast

When we travel, I describe multiple bars and breweries in each post.  For example, in September we headed down the Southern Oregon Coast through Redwood National Park to Eureka.

In three different posts, I described eleven breweries, one bar and one bottle shop that we visited on that trip including our favorite, Mad River Brewing in Blue Lake California. 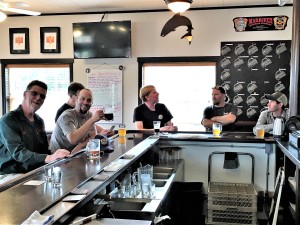 Drinking with the friendly staff of Mad River Brewing

And I am always amazed to see the locations at which the visitors to Thebeerchaser are doing their Google searches which bring them to my domain.

Known to roam both New Guinea and Khazakstan

Perhaps that’s some people getting vicarious thrills from reading about watering holes because Saudi Arabia has a complete ban on alcohol – it is illegal to produce it, import it, or consume it.

In fact, in 2017 I even had two visitors from New Guinea and one from Khazakstan.  Perhaps they got to my blog by mistake and they meant to do a search for The boar chaser……

My practice when Beerchasing in the Portland area is to generally visit an establishment at least twice – that gives me a better feel for the place and more opportunity to meet patrons and talk to the bartenders or staff about the bar or brewery’s history and distinguishing characteristics.

Now 2017 set a record for the most venues visited.   Although the Portland area total was lower than most years at fifteen bars and breweries, this number was supplemented by twenty-seven outside Portland including multiple entries in Wisconsin, California and the Oregon Coast.

You can see the list for both categories at the end of this post.  And one brewery is in a special category – the Benedictine Brewery in Mount Angel which will be discussed below. 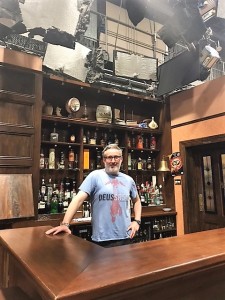 For Portland establishments, I devote the entire post to one venue.  For example, my favorite bar in 2017 of the nine Portland area watering holes, was TC O’Leary’s Irish Pub where I got to know the owner, Tom, a former star from Ireland’s most popular soap opera.

And the brewery which captured my imagination of the five Portland area enterprises reviewed was Tigard’s Flyboy Brewing.  The outstanding people in these establishments gave them the nod plus you haven’t lived until you have tasted their Pilot’s Peach Pale Ale.

Each quarter I also write about an individual or group for which I bestow the “honor” Beerchaser-of-the-Quarter (BOTQ).  In the past, these have included authors, athletes, war heroes, media personalities and even my graduate school Professor of Public Finance, Portland State’s Dr. John Walker.

The only Beerchaser-of-the-Year was named in 2016 – my wife of thirty-eight years, Janet, who has shown the patience and given her support for the time I spend checking out these colorful and many times historic, public houses. 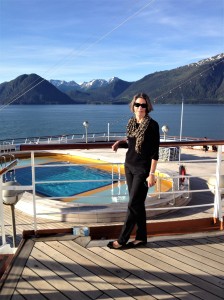 Fortunately, she has grown to have a fondness for IPAs (Buoy Brewing’s of Astoria is her favorite) – a change from generally consuming an Oregon Pinot when we dined out in prior years.

I was somewhat remiss this year and only named three BOTQ – Portland radio personality, Amy Faust, of the Mike and Amy Show and then a  tribute to the late author and my friend (as a result of this blog) Brian Doyle.

And then there’s Father Martin Grassel, who is the head brewer at the Benedictine Brewery at the Mount Angel Abbey (in addition to being the Procurator for the Abbey – a very big responsibility.) He is a wonderful man with a fascinating background. 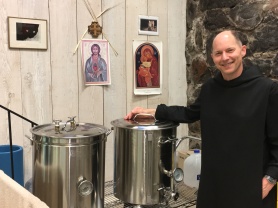 Father Martin of the Benedictine Brewery

Stay tuned for a catch-up effort in 2018, when my first BOTQ will be Portland developer and civic leader, Mark Edlen.

For a list of past recipients of Beerchaser-of-the-Quarter, see the tab so designated on the header at the top of this post.  These people are interesting and have compelling stories and you probably know some of them.

Looking Back and Reflecting……

Since my visit to the Brooklyn Park Pub in August, 2011, my first bar on what has been a six and one-half year journey, I have visited and reviewed a total of 257 different watering holes.

While my initial intent was to restrict these visits to Portland locations, our retirement travel was conducive to telling you about bars in Europe and Alaska, Hawaii,  Montana and a bunch of other states in addition to saloons all over the state of Oregon – from the coast to John Day and Baker. 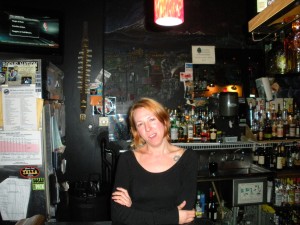 The personable Phoebe of the Brooklyn Park Pub

By the way, I was very happy that I returned to the Brooklyn this summer and had a visit with their wonderful bartender Phoebe Newcombe, one of my favorite of many dynamic personalities (also third place in Willamette Week’s Best- of-Portland Bartenders) I have had the pleasure of interviewing since 2011. 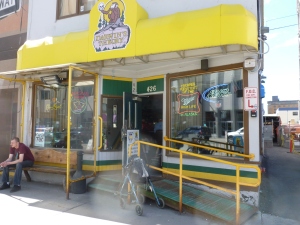 So of that total (257) 114 have been in Portland and 143 in the aforementioned other geographical locales.  (Sometime if we have a beer, I will tell you about our visit to the bar right below the summit of  top of Mt. Schilthorn in Switzerland – at an altitude of 9,744 feet.)

Or there was my favorite dive bar of all time – Darwin’s Theory in Anchorage, Alaska – owned by an Oregon State University alum.

The Schilthorn Taverne in Switzerland

The charts below show the name, location type of establishment and date of the post for each place reviewed in 2017 – separated by those in the Portland metropolitan area and those outside the Rose City. 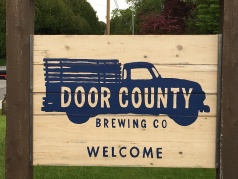 On the Oregon Coast

Fans of great beer and the rich history of brewing can look forward to the opening of the Benedictine Brewery and Taproom in mid-2018.   After an incredible community timber raising on November 11th, the Brewery is now framed and its flagship beer, Black Habit got a wonderful review at this link in Willamette Week.  http://www.wweek.com/bars/beer/2017/12/12/in-a-bavarian-village-in-oregon-you-can-drink-beer-brewed-by-benedictine-monks/ 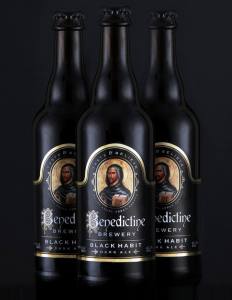 I have been working as a volunteer on this project for the last fifteen months – it’s a vision of Father Martin Grassel.  When completed, it will be the only brewery west of the Mississippi in which the ownership and brewing is by monks – in this case those at the Mount Angel Abbey, established in 1882.

To see some videos which will amaze you and give you an idea of the energy and spirit shown at the timber raising at which about 100 monks, seminarians and friends from the Mt. Angel community worked as a team all day,  check out the following link from my post on 11/21.