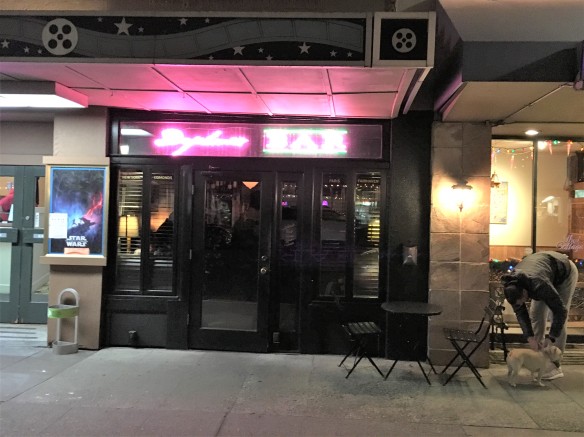 In my recent review of the Caroline Tavern, I mentioned that my Beerchasing exploits in the State of Washington, paled in comparison to those in Oregon and surrounding states. 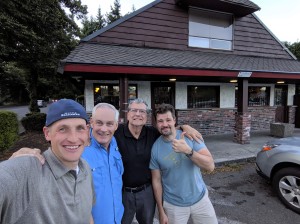 Outside the Caroline Tavern with the Magnusson clan

Based on the great experience at Caroline’s, I decided to expand the journey into the Evergreen State by visiting a bar in Edmonds, Washington.

And I definitely would not have discovered Daphne’s or its legendary bartender, Desmond van Rensburg if it had not been for Pete Andrijeski – a blogger, whose adventures at bars since 2006, far exceeds my own count of about 375 since I started Thebeerchaser in August of 2011.

I came across Pete’s blog when I was researching the history of Caroline’s and was impressed with both his narratives and the extent of his travels on our mutual topic of interest.

So I contacted him by e-mail and we agreed to meet and exchange stories and raise a mug together the next time I was in Seattle.

That occurred in November and I asked Pete for a recommendation.  Without hesitation, he stated “Daphne’s in Edmonds – it’s my favorite bar.”  (More about Pete and his exploits below….)

After a very enjoyable 90 minutes downing some of Desmond, the bartender’s, craft cocktails, I understand his affection for this place – essentially a medium sized room (250 sq. feet) – a former barber shop – whose character and ambiance far exceeds its physical dimensions.

Desmond in the “Living Room” environment at Daphne’s

A 2007 review in the Seattle Times was entitled, “Where Taste Trumps Elbow Room.”  And one recent Yelp reviewer (6/8/19) stated:

“This bar is literally the size of our living room. It’s cozy, lively, and is a local favorite. The bar top can seat up to 9, the booths up to 3, and outdoor seating up to 8.”

Now after visiting about 375 bars, breweries and pubs over the last eight years, I can say that a primary factor in defining the character of the establishment is the bartender.  And I have met some outstanding barkeeps who affirm the statement by internationally acclaimed Canadian economist, Harry Gordon Johnson who said: 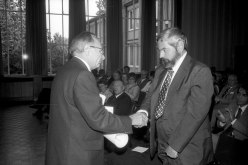 The economist who opines on mixologists…..(on the right)

“The greatest accomplishment of a bartender lies in his ability to exactly suit his customer.”

(Why this quote is attributed to a noted economist, transcends the scope of this blog post.)

It so happens that two of the most memorable bar personalities I have met during my visits to watering holes in the US and Europe have been in the last two posts i.e. Ernie Bob from Second Street Brewing in Santa Fe and Desmond van Rensburg at Daphne’s. 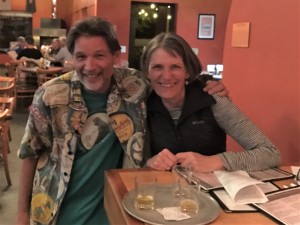 Ernie Bob with Janet in September

It is noteworthy that the great majority of social media reviews on Daphne’s mention Desmond and the impact he had on their opinion of the bar.

“Desmond is the man, he takes the time to get new faces names and welcome them to his bar. He shows passion in every cocktail he makes.”

Since I research each place I review before I visit, I wondered if the narratives about this personality might be overstated….

Desmond knew Pete from his previous visits and welcomed me in the same animated manner as he did every Daphne’s newcomer.   And his exuberance had a positive impact on everyone else in the “living room.” 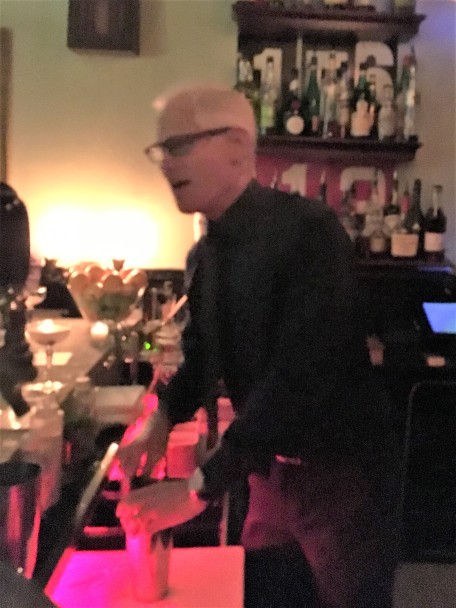 He is a native of Johannesburg, South Africa and is married with one son.  After a short sit-down conversation in a coffee shop near the bar, one of the co-owners, hired him in May, 2011 and he now practices his craft four nights per week.

In his new job, he quickly made an impression and was named in 2011 as one of KOMO Television’s Most Fascinating People in Edmonds:

“There are so many reasons why Desmond is one of Edmond KOMO’s most fascinating people, but OI think the main one is that he makes each and every person feel like they are the most fascinating person he’s ever met……He adds to the Main Street charm.  Desmond is always armed with a joke to tell and a smile to share.”

Daphne’s has a few beers on tap, but the specialty is cocktails and following Pete’s lead, I had two of the specials listed on the menu which range from the Moscow Mule at $10 (draws rave reviews) to a $12 Manhattan.

I tried the Sazerac – a rye whiskey concoction with New Orleans origin and also the Boulevardier – whiskey, sweet vermouth, and Campari. 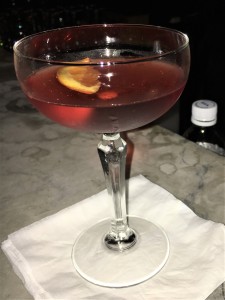 I can’t remember which he drank that night, but Pete’s favorite cocktails are Old Pal, Negroni, Corpse Reviver #2 and Sazerac

One doesn’t go to Daphne’s to eat other than munchies such as pretzels, nuts and popcorn although one review had a reference to Desmond’s meat and cheese platter. 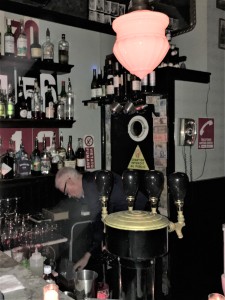 Contributing to the favorably dark and somewhat raucous atmosphere are some old signs and mementos including a gold plated telephone.  The old (1923) Edmonds movie house next door on the City’s Main Street adds to the character. 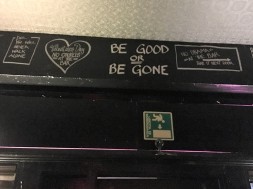 A 2018 article in the Herald Business Journal of Everett  amplifies:

“The coup, however, is a story written by actress Anna Faris in Delta Sky Magazine that names Daphne’s as one of her favorite places on her favorite street in her hometown of Edmonds.”

A major contribution to my enjoyment of the bar that evening was meeting and chatting with the aforementioned Pete Andrijeski.  He is a burly guy, raised in Boise, attended the University of Washington and is a technology professional and now works for Expedia.

If you check out his website    http://www.peterga.com/  you will find that he is a fascinating individual with diverse interests (besides bars…..) ranging from baseball to gardening to music and a voracious and impressive appetite for non-fiction. 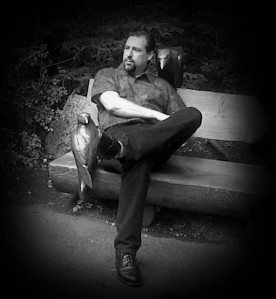 I identified with his zealous (some might say “compulsive”) tendency to keep lists such as this one which shows the breadth of his reading.

Time constraints limited our conversation that night to mainly sharing our favorite bars, but if you check out his website, you will also see that his sister, Julie is an acclaimed musician living in Pittsburgh

“….plays in several groups, as well as teaching classes and seminars……Julie has also played and recorded with several other orchestras (besides Chatham Baroque), operas, and early music groups, including the Cleveland baroque group Apollo’s Fire and the Celtic group Shanua.”

The section on his late wife of seven years, Cheryl LeRouix, who lost her battle with breast cancer in 1996 will bring tears to your eyes. 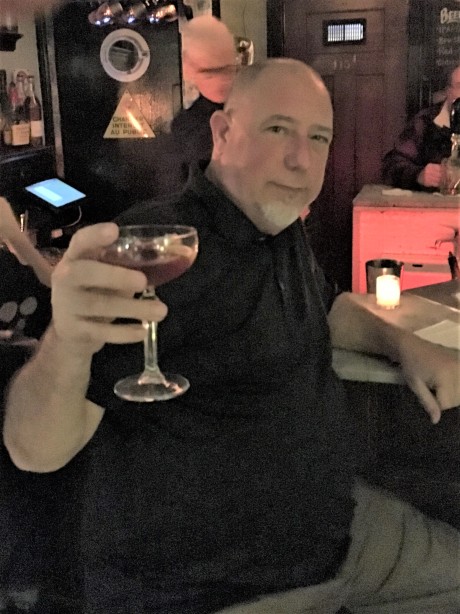 And as I mentioned in a previous post, my 375 + watering holes visited and reviewed since 2011, is dwarfed by his 3,906 bars of which 1,659 are in Seattle.  http://www.seattlebars.org/   (Some may be incredulous about these figures, but I definitely believe him and check out his blog.)

He downplays this feat and jokingly referenced “recognition” such as one person who recently became aware of his blog and stated, “You are the God of bars.”   (Maybe that would make Thebeerchaser a minor prophet equivalent.)

Pete made my blog procrastination less onerous when he lamented in an August post this year, “I’ve recently gone about 9 months without posting a blog entry, and I am now 1,154 bars behind.”

Off the beaten path in Shoup, Idaho…

His list of bars and other features are compelling including his favorite dive which will be on my list during the next trip to Idaho – the M.T. Saddle in Shoup, Idaho.

“I was not sure we’d actually reach this one, as it is 13 miles down a single lane dirt road along a river, and my car is the furthest thing from an off-road vehicle.”

My conversations and visits with Pete will continue in the future as he has an affinity for Tiki bars and wants to visit some of them in Portland.  His suggestion that we meet at Daphne’s was a gem and I will return there on one of our frequent trips to Seattle – the next time Desmond will not have to regard me as a first-timer.

The bar opened in 2006 and is co-owned by Brian Taylor and Louise Favier, who previously owned other establishments in Washington, but sold all of them except Daphne’s when they moved back to New York in 2013, where they also own two bars.

Taylor shared the sentiment of many when he stated:

“Daphne’s wouldn’t be the same without van Rensburg.  It was a great little bar before Desmond, but Desmond has taken it to a whole different level,”

Desmond stopped bartending for a minute to pose with Pete.

As the Edmonds celebrity, himself, aptly stated in one of the many articles about him and the bar:

“It’s the press, you know, the place, the cocktails and the dysfunctional bartender.  It’s one great blend.  That’s what it comes down to.  When you mix it all together, it makes for a wonderful experience.” 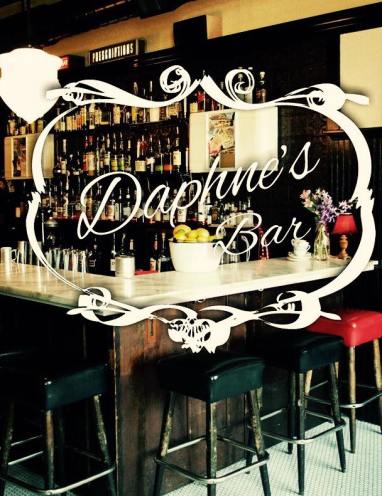