In the first post on our nine-day road trip through the Southwest, I mentioned that one of our stops was Pueblo – two nights in this Colorado city on the Arkansas River.  After visits to both Mesa Verde and Great Sand Dunes National Parks,we arrived in this historic steel town founded in 1870 – a melting pot of many nationalities. 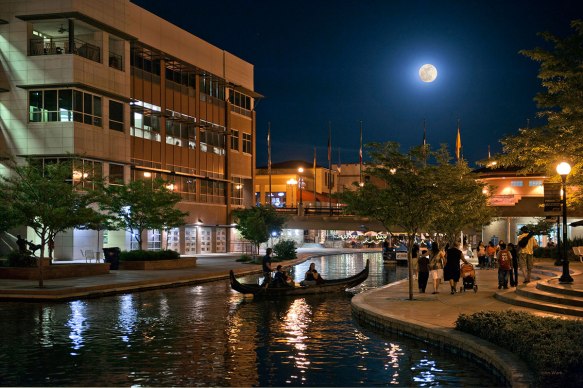 We dined that night at the Brues Alehouse Brewery on the Pueblo Riverwalk in a large memorable building – at one time, the police station and jail.  The Alehouse had a nice riverfront patio and an expansive one on the second level. 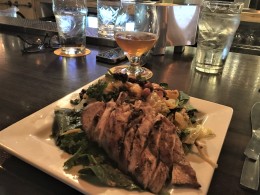 Brues gets good comments on social media on their food and Janet enjoyed a spinach salad loaded with grilled chicken and I had an outstanding teriyaki chicken bowl.  I downed a Leaderhead IPA – their flagship brew.  It was one of their nine on tap and since one of their seven guest taps was from Ecliptic Brewing in Oregon, Janet had the Vega IPA.

The Sengers (on the right) – Beerchasing regulars!

The next morning we met our good friends John and Barb Senger – prior Beerchaser companions from our time in Boulder, Colorado where they reside.

And their research skills, honed as teachers and administrators during their impressive careers in the Boulder School District, were still evident.  They had lined up a full-day’s itinerary with a diverse group of watering holes, but focused on those with robust historic roots.

Followers of Thebeerchaser blog know of my great affinity for dive bars and the two Pueblo “institutions” I describe below join the classics on Thebeerchaser’s eight-year travels. 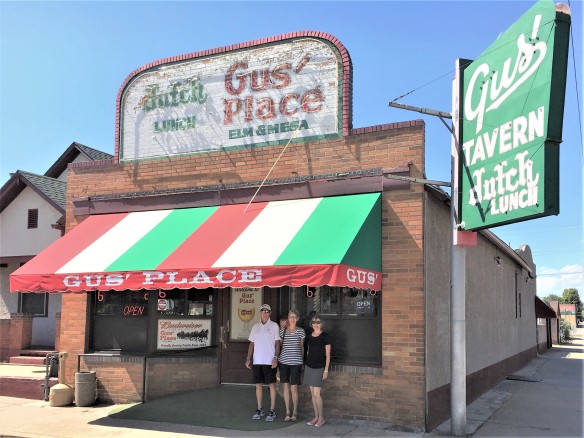 There are some dive bars with more recent histories, but which still appropriately reflect the dive bar environment.   Don’t ask me for a definitive description – as former Supreme Court Justice, Potter Stewart, opined regarding pornograpy, “I know it when I see it.” (Jacobellis v. Ohio, 1964).

And then there are those dives, which based on not just their ambiance, but their longevity, the founder’s roots and the stories which linger in their no longer smoke-filled crooks and crannies from years back, that earn that distinction.   Gus’s is one of the latter – and it’s obvious when one walks in the door.

The photos, old newspaper articles on the wall, the booths, the round-red bar stools, the general décor and the rich legacy of it’s original owner all create a lasting impression.  A 2013 story in the Pueblo Chieftain gives some insight:

“The building that is now Gus’s was built as a church in 1892.   Gus Masciotra bought the building in the 1920;s and ran a mercantile shop out of it.  When Prohibition ended in 1933, he turned it into a bar and it’s stayed relatively unchanged since.  Gus’s was the first establishment in Pueblo to receive a liquor license.”

The hallmarks at Gus’s Place are the cheap, ice-cold schooners of beer and the Dutch Lunch.  And we discovered why….

“…..a plate of build it yourself lunch Sammy filled with onions, several kinds of lunch meat, and tomatoes with condiments of mustard, mayo, all laid upon really fresh white bread to build your own sandwiches.  This combo comes from the Bojon history of the area and the steel mill crews from the 40’s & 50’s and still is delicious today.”

There was a 2015 article in the Oklahoman that stated Gus’s was for sale. (The fact this situation made the news in an Oklahoma  City newspaper is evidence of the bar’s celebrated reputation):

“Current owner Evelyn Masciotra, 93, is in ill health and now resides in a nursing home, prompting her decision to sell, according to her son, Gino Mittino….In its heyday, it made Ripley’s Believe It or Not three different years for selling more beer per square foot than any other bar in the world.” 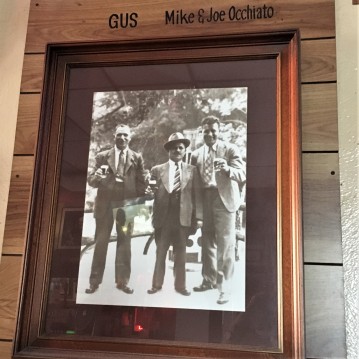 However, the bar was actually not sold until last year.  Although Gus and his son, Robert, who helped him at the bar for 28 years, are now both gone, you can still envision, them smoking cigars and greeting the steel workers stopping by at all hours for lunch or an after-shift mug.

In any event, the experience at Gus’s set the stage for memorable Beerchasing the rest of that day.   Just a block away from Gus’s (and unfortunately 1,445 mile from our house in Oregon…) we took another step back into history in this notable Bessemer neighborhood (annexed into Pueblo in 1894) with our visit to Gagliano’s Bessemer Mercantile Company.

As described by this Trip Advisor reviewer on 6/28/18: 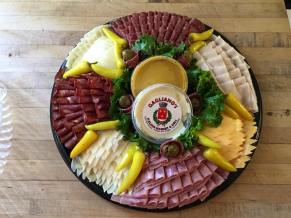 Try to by pass this tray if you are hungry.

“This small store, now in its 97th year, is chock full or gourmet foods from A to Z. Pasta, select olive oils and vinegars, sweets, home-made sausage, old world cheeses and deli meats, frozen hand-made heat and serve pastas, European cooking gadgets and more line every inch of this immaculate and charming grocery store. If you want a deli sandwich, they will fix you up.” 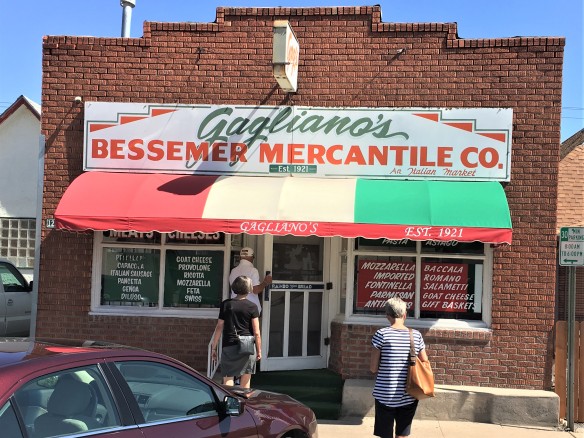 And it was a good thing we had gorged ourselves on the Dutch Lunch a few minutes earlier, because the selection of meats, cheeses and bread was irresistible.  In fact, Gagliano’s supplies the “raw materials” for the spreads at Gus’s Tavern down the street.

Only .3 mile from Gus’s Tavern is another bar whose founding also dates back to the end of Prohibition.  Eiler’s is in a neighborhood that’s “long been know as Old Bojon Town (Croatian, Serb, Slovian and Yugoslavisn), after the Eastern European immigrants who came to work at the mill (Colorado Fuel and Steel Mill).”  7/16/14 KRCC  Public Radio

Eilers is across the street from the big Catholic church and near the elementary school in a grand old building which was originally a grocery owned by the Glovich family – Matt and Josephine, who lived next door.  Matt died only two years after they opened:

“She was left with five kids to support.  The neighbors said, ‘You need to get a liquor license. It’ll help.’ She borrowed $20 to buy some glasses and turned the grocery counter into a bar.  She started with a keg of beer and a few bottles of whiskey.  ‘She had some backbone, I’ll tell you,’ said her great granddaughter, Sue Mikita, who has co-owned the bar for the last six years with her brother, Ray ‘Ray Dog’ Vertovic.”  (Pueblo Chieftain 2012 on plaque in the bar.)

Now Eiler’s is a larger bar and not as dark as Gus’s place, but still reeks of the ninety-year history.  The two big screen TVs over the bar detract just a little from the ambiance.

As we walked in, there were some older guys – obviously regulars – in a booth just to the right of the entrance.   (When I say “older”, it’s a relative term.   They were older than Seattle Seahawks quarterback, Russel Wilson, but younger than I.)  We could hear them talking and one said, “Well, I’ve been in jail two times,” with a response, “That’s nothing – I’ve been in jail three times!”

When we sat down, John Senger told us that we had to have the “Bojon initiation” on our first visit to the fabled bar.   That means you down a shot of Schlevo (Slovian plum liquor) followed by your PBR – perfectly appropriate for Thebeerchaser.

When the bartender found out about the blog, she brought out some old photos from the early 50’s.  They included the one below and she then said:
“See that guy over there?” pointing to one of the guys in the booth by the door.  “He’s the second baby from the end on his mom’s lap in the photo.”   The photo was consistent with this story from public radio:

“They’d bring in their kids and we’d take their picture of the new babies and we’d put them on the wall – we have books and books of these things.  Kids are always welcome and the kids love to come because the customers would buy them candy or Pepa (the original owner) would feed them.”

So I went over to the guy she pointed to and introduced myself and asked if he would be in a picture with me.  He stuck out his hand and said:

“I’m James “Horse” McHorsney.  But you should just call me ‘Horse.’  I live across the street and I’ve been coming here for at least forty years.” 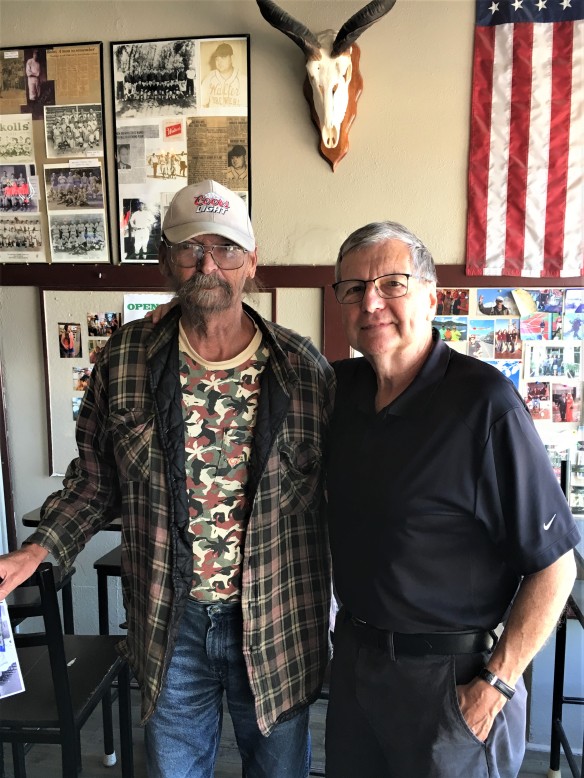 After one more stop as described below, we left Eilers and met the rest of our group including John and Barb’s daughter, Cassy Tavlor, her husband, Kirk, their granddaughter, Sarah and great granddaughter, Penelope, at the Shamrock Brewery and Pub.  Kirk Taylor is the Sheriff of Pueblo County and his job includes responsibility for Pueblo County Corrections.

I told the story about babies in the picture from Eiler’s and showed them the picture with the regular.  Sheriff Taylor, smiled and said, “Oh that’s Horse….I know Horse!”

Walter’s Brewery and Alehouse
Walter’s – another historic establishment – and perhaps I’m over-utilizing that word, but in Pueblo, that’s just part of the background.   This brewery, however, doesn’t just go back to the end of Prohibition, but to the 1800’s when Martin Walter purchased the Pueblo Brewery for $7,000 and the Walter’s brewery known in Wisconsin, began its long run in Pueblo. 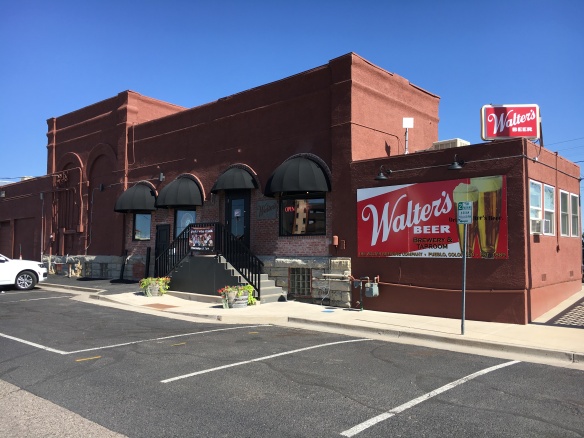 It thrived until 1975 when it was sold and reopened in 2014 by a group of Pueblo entrepreneurs.  As with other Pueblo bars and breweries, its primary clientele for years were the steel workers.

The Alehouse had thirteen beers on tap – not your typical microbrews, but concoctions such as Pueblo Chile, Chile Clamato, Chile Red Lime – reflective of the region’s affection for the peppers they grow.
But we tried its trademark Pilsner:
“History in a glass!  The one that started it all for the Walter family.  The pre-prohibition, 1800’s German pilsner recipe is the beer that made the Walter family famous.”

Our Beerchasing day was not finished, however, so stay tuned for the visits to the Shamrock Brewery and Alehouse, Smitty’s Greenlight Tavern and the Star Bar – all part of the bountiful Beerchasing scene in the City of Pueblo.