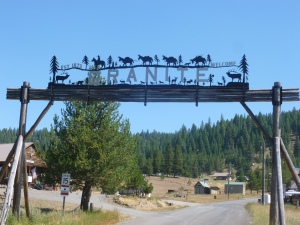 Granite – one of the stops in the Eastern Oregon Beerchaser Tour

After visiting pubs in six European countries on a 21-day Rick Steves’ Best of Europe Tour this summer, a return to basics was in order.  What better description of “basics” could one devise than a four-day road trip through Eastern Oregon – visiting taverns, pubs and bars along the way. (This post is the first of three installments…)

Historic beauty along the highway 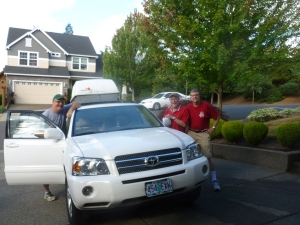 Psyched to start our 1,300 mile journey

We camped three nights and stayed at the wonderful Diamond Hotel, in Diamond, Oregon on the fourth.

Diamond, with a population of five, is so small that the “Welcome To” and “Come Again” signs could be on the same telephone pole.  Anyone who has not experienced this historic inn, should make it a bucket-list item.

As one can see from the map, we circled through the “God’s Country.” 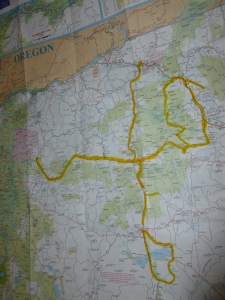 The Route – From Prineville on the West to Baker on the East – Diamond in the South and ending at Pendleton (North) – 1,346 miles in 4 days.

This trip was a great opportunity to either visit or photograph some of the colorful and historic local watering holes that are institutions in cities such  as Prineville, LaGrande, Baker, Fossil, Burns, John Day, Mitchell and Sumpter. 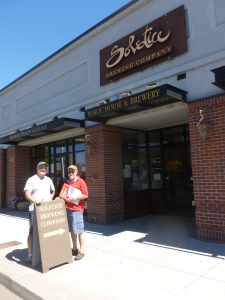 Solstice Brewery – Solstice celebrated its second anniversary in July and with a play area for tots (which we did not try) is a family oriented venue.  Shelby, our waitress, was friendly and helpful as was the owner, Joe, who told us it was the only brewery in Prineville and that they have a five-barrel capacity.

Shelby and Dave with Thebeerchaser Logo

The Bar at Solstice

They bought their five-barrel brew kettle from Terminal Gravity Brewery in Enterprise. Their beer was good and we tried the War Paint Red Ale, Show-me-the-Honey Wheat Ale and Walton Lake Lager, three of six Solstice’s own brews.  We also had a good Sunday lunch.

The Horseshoe – Established in the 1940’s

Horseshoe Tavern  – Just up the street from Solstice on Prineville’s Main Street we met native Pennsylvanian, Heather, the bartender, who did a great job filling us in on the history of the bar, which is over 70 years old – a fact substantiated by the picture of the original owner, Howard Bose, on opening day.

Heather told us that her most challenging customers were the off-duty state troopers, who made the trucker patrons look tame.

They have seven beers on tap and we enjoyed the Bombshell Blonde from Cascade Lakes Brewery in Redmond.  This review from “Urban Spoon” summed up the Horseshoe pretty well, “Good food, huge portions.$1 beer, friendly staff.  What more could you want?”

Heather at the Horseshoe

Heather convinced Thebeerchaser to have an “Angry Balls” cocktail which is Angry Orchard Hard Cider (5% alcohol) and a drop of Fireball.  It was very good although evoked no emotional or physical reaction implied by the name.

The Hideout Saloon – Our next stop was in “downtown”, LaGrande, where Cindy, the gregarious bartender who has worked at the Hideout for ten years, hailed from the Land of Sky Blue Waters as did the “Beer-of- the-Day” – a draft Hamm’s.

Cindy briefing Dave on the Hideout

Cindy didn’t know exactly when the bar started operating, but said without equivocation, “It’s older than anybody here.”

We noted that a number of patrons – other than ourselves –  reminded us of some of the Old Testament characters so we knew the bar was old.

Because they had cheap PBR and Dave was in a nostalgic mood, he harkened back to his days in the Navy’s Submarine Service and used the phonetic alphabet and ordered a “Papa – Bravo – Romeo,” which Cindy understood.

The LongBranch Saloon – Just down the street, we discovered our final LaGrande bar – one that had no lack of character and ambiance.  Patsy, the bartender didn’t know how old the bar was, but said that her grandmother worked there at one time.

Barbed-wire sculpture added to the atmosphere

One young guy came in and she asked for his ID which he didn’t have.  He left – came back and showed his ID – then just got a glass of water….!  The Long Branch also has a quant diner attached that looked like it was from the 1950’s.

We then debated where we should camp that evening.  Steve advocated flexibility, but I told him, “Spontaneity on this trip takes a lot of planning…”

We stopped at the Dairy Queen in John Day to assess our options, while I had a chocolate malt, Dave a Dilly Bar and Steve a DQ Sundae.  We couldn’t figure out why Dave told the Drive-thru waitress to make sure that our orders were “To Go.”

We headed east  on Highway 26 and about half way between John Day and Sumpter, we ended up at one of Oregon’s wonderful State Parks – Unity Lake State Recreation Site.

“Camping” may be a stretch to describe our accommodations because we stayed in a cabin with bunks, but as you can see from the photos, it was a perfect ending to a day of exploration.

A toast to God’s Country!

And this post should end with a short tribute to the man who instilled my appreciation of God’s Country when I was in my teens and he was a carpet salesman for Mohawk Carpets.

My Dad – F. Duane Williams –  on whom we lovingly bestowed the moniker, “FDW”, grew up on the East Coast and thanks to his courage and that of my mom (Frannie), we moved to Oregon from Ohio in 1960 after a three-month camping trip (a VW bus hauling a Nimrod pop-up-tent trailer) across the US.  We missed three + weeks of school in the fall because FDW wrote the superintendent of schools that we were getting an outstanding education on the road.

We all fell in love with Oregon on the trip and FDW quit his job and moved to Portland while Frannie sold the house and then drove the four kids across the country to our new home in Oregon City.   From that point on, FDW was imbued with “The spirit of high adventure.” 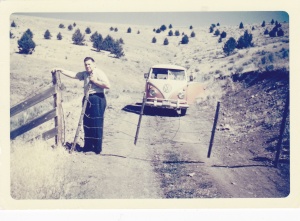 FDW and his VW

Although he did not make much in commissions from his Eastern Oregon territory, he loved the trips. From the geology to mingling with his dealers such as Doc Mosier of Mosier’s Home Furnishings in John Day – founded in 1955 and now operated by Doc’s son he relished the adventure.

I still have a personally autographed copy of famous Oregon cattleman, Herman Oliver’s autobiography, Gold and Cattle Country, with whom my dad had many visits in Grant County.

And no trip was complete without  navigating a little-used Forest Service road in his VW Bus. (We once spent the night sleeping in the VW when we took the wrong turn got stuck on a new spur in the Mt. Emily Road and had to be pulled out the next morning by a bulldozer that was excavating for the new road!) 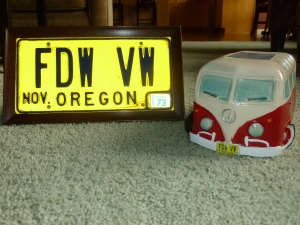