The Glorious history of the Roman Empire – Still visible today.

In Florence we saw the wonder of Michelangelo’s David in the Accademia and then headed to Rome.  Awed by the history, I tried to envision the perspective of a Roman Legionnaire in 49 BC crossing the Rubicon with Caesar to reassert his power in Rome after the Gallic Wars.

However the metaphor fails since I slept in a comfortable bed the night before, had an outstanding breakfast and traveled in a luxury bus and the only “hardship” endured was doing some of our laundry in the hotel sink!

Moretti – unfortunately,  not an option for the Roman Legion…..

Compare this to the Roman infantryman (named “Mules”) who carried as much of his own equipment as possible including his own armor, weapons and 15 days’ rations – about 60 pounds total – and walked in sandals. As comedian, Bill Maher, quipped, “If you think you have it tough, read history books.” (See the end of this post for more details on ancient Roman beer.)

We toured the Vatican first and were overwhelmed by the immense collection of art and the historic structures.  It compels consideration of the impact of the Catholic Church through the annals of history – even before priests had to admonish their parishioners to turn off their mobile devices at the start of mass.

These range from the positive contributions to art, culture and education to the tales of intrigue and outright decadence by some of the medieval pontiffs.  Stunned by the magnificence of the Sistine Chapel, one can imagine Michelangelo responding to Pope Julius II in 1508 by saying, “You want WHAT painted on the ceiling…?”

“This Swiss Guard gig is an honor, but do we get a brewski when our watch is over?”

June 2nd is Republic Day –  the Italian equivalent of Independence Day in the US – and Rome was festive.  In St. Peter’s Basilica, we witnessed a half-hour procession of worshippers – all from one village – filing in for a 6:00 PM mass.  Take a look at Thebeerchaser’s video to see just a small fragment of the celebrants filing into St. Peter’s: http://youtu.be/fHcJQVsWv0g, 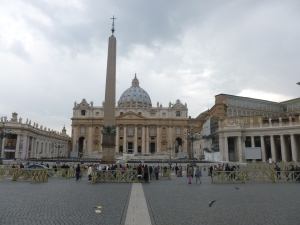 The State within a State 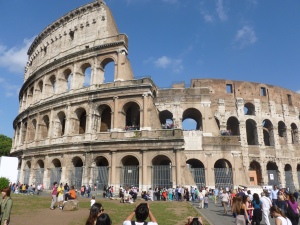 On the second night in Rome, after an outstanding tour of the Colosseum, we had dinner in a wonderful pub/cafe – Miscellanea.

It is interesting to note that a lot of bars and taverns in Portland, although they have their own internal ambiance, there is a good  chance of passing a Subway Store, a Home Depot or some other strip mall chain upon exiting.  Conversely, immediately adjacent to Miscellanea was the Pantheon.

This incredible temple to the gods of Rome rebuilt in 126 AD, is a circular structure with sixteen massive granite columns and a central opening to the sky, which sources say is still the world’s largest un-reinforced concrete dome.

The granite columns of the Pantheon – this ain’t no Home Depot…!

The reviews of Miscellanea were spot on including this one by a Canadian tourist this March:

“We were near the Pantheon when it started to rain and we went into this cafe for shelter and lunch. How lucky were we! The place was very busy and we shared a table with three other diners. Pasta was very good and the house wine was fine.

The atmosphere was good with lots of laughter and chatting and it seemed to be mainly Italians who were eating. At about 2pm the place started to empty as Romans returned to work and left a few tourists to idle away the afternoon with another glass of wine.” 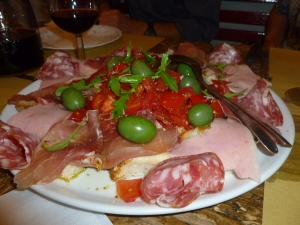 Cassius had a “lean and hungry look.” Maybe we should jog back to the hotel……

Miscellanea had a great selection of beer and wine plus the food, as you can see by the photo, was amazing – and the portions were large.

It was also interesting to see both the display of beer labels and a chronology of university students who signed the “register” when visiting the establishment – essentially, a listing of colleges and universities all over the world whose students frequented the bar while studying in Rome.

A great selection of beer and wine.

I loved this picture of the 1994 class of Notre Dame which is concrete proof that the University has an academic program of which their football team can be proud:

On the walk back to the hotel, per the tradition, we threw a coin over our left shoulder at the Trevi Fountain – commissioned in 1732 by Pope Clement XIII – the largest in Rome and one of the most famous fountains in the world.

Legend has it, that this action ensures a return trip to Rome – plus it helps to fund the water bill for the gushing attraction.

Trevi Fountain – featured in the movies, “Roman Holiday” and Three Coins in a Fountain”

After we left Rome, we stopped at another majestic cathedral in Central, Italy.

The Cathedral of Orvieto, built in the 14th century is another example of the Pope’s influence – this one, Pope Urban IV.  While the external trappings are impressive, the interior is another magnificent example of Middle Age art. 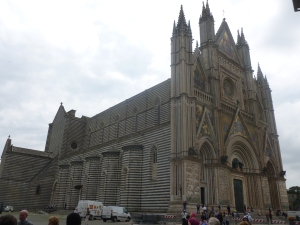 Orvieto Cathedral – to commemorate a miracle in 1283.

The beautiful stained glass in the Cathedral of Orvieto, Italy

And going back to the Roman legionnaires and the quest for a good brew, a sixteen-year old post by Gregory Smith from the “Brew Your Own (BYO) Magazine” web site, poses an interesting theory to the role of beer in the time of Caesar:  “History tells us that Julius Caesar was stabbed in the back by Brutus in 44 BC. If everyone had just been a little patient, Caesar’s passion for a mug of beer would have killed him off without the mess of the Ides of March stabbing. In fact it was probably the Roman passion for a good beer that killed off the entire Empire.

It wasn’t the actual beer that would have killed the Roman ruler, it was his lead-laced beer mug. Roman brewers used a variety of earthenware containers to store and serve their beer. The pottery and glaze were lead based. The risk to the beer drinker would increase based on the amount of beer consumed or the age of the brew.

If Brutus had waited a little longer, Julius Caesar could have literally drunk himself to death by lead poisoning, which was very common in the years of the Roman Empire (from 753 BC until around 476 AD)

Beer could have caused the fall of the Roman Empire because it probably led many Romans to settle in lands far away from Rome, leaving the heart of the empire unprotected against ravaging barbarians.”

And now on to the Cinque Terra on the Mediterranean coast of Italy and the Swiss Alps!  Then, before the end of the Rick Steves’ Best of Europe Tour, we head back to Portland for a review of one of Portland’s classic bars – The Slammer.  And don’t forget to try a Birra Moretti.  You can get it in the USA and 39 other countries.