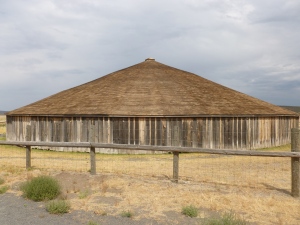 The Peter French Round Barn south of Burns

After lunch in Burns – a great town where one pundit asserted, “You could get a good meal, rent a movie and hire a contract killer,” we headed southeast on Highway 78 to Diamond, Oregon (population 5) and our final night at the historic Diamond Hotel.

Passing through the most desolate country on this stretch –  Burns south past the Malheur National Wildlife Preserve almost to the Steen’s Mountains and the Alvord Desert. We toured the Peter French Round Barn – on the National Historic Register and constructed around 1870 by the cattle rancher who used it to train horses.

More prevalent than cars on Highway 78

The remarkable interior structure of The Round Barn.

About 50 miles south of Burns, we also stopped at the Diamond Crater Natural Area –  which reportedly “has the best and most diverse basaltic volcanic features in the United States.” We saw lava flows and tubes and cinder cones from the observation area. 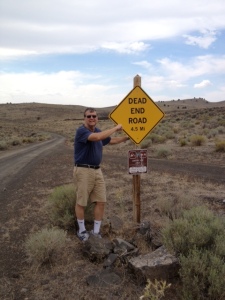 A road through the lava beds and a sign that Dave maintained was a description of Thebeerchaser’s career.

The Diamond Hotel was in a beautiful grove of poplar trees and we believed the sign that said the population of Diamond was only five since the hotel was in essence the center of “the city” – on Main Street.

The Census Bureau had an easy time in this venue

After playing cards and having a beer, we sat down for “Family Dinner” – eight people sitting around a large rectangular table for an outstanding rib dinner with all the accoutrements.  The three-hour feast lasted that long because of the fascinating conversations with our fellow diners.

Family Dinner at the Diamond Hotel

Two of the diners were a married couple in their mid-eighties and riding in on their Harley – mid-way through a tour that took them into Montana, Idaho and Oregon.

Another was a high-tech exec from Portland – a German immigrant who rode in on his BMW bike on which he has toured most of the western US and Canada.  We were the only boring ones at the table……David Thompson, one of the friendly owners, briefed us on history and shared stories while we were eating.

Notice the Harley and the BMW bike

For those who love our state and want to explore, the Diamond Hotel should be on your bucket list.  Built in 1998, it was completely restored in 1990.  Shirley and David Thompson, descendants of one of the first families in Diamond bought the hotel in 2001 and now operate it.

It was headquarters for the Cycle Oregon staff during their 2013 ride this summer, which had a one night stay near Diamond.  The rates at the hotel, including the dinner, are very reasonable and it is quaint and interesting.

And so ended our four-day road trip.  After breakfast, we headed north – this time on Highway 205 back through John Day, then north on 395 and to Steve’s home in Pendleton.  We photographed the Stampede Room in Long Creek, which will have to wait until our next trip to raise a mug.

The Stampede will have to wait until the next trip

We saw amazing sights and reaffirmed the premise of Thebeerchaser’s Tour of Portland Taverns, Bars and Pubs – “Each bar or watering hole has its own unique character, ambiance and clientele,” – only in the central and eastern part of our wonderful state.

Whether sampling the brews of Johnny Brose at the Bull Ridge Brewery and Pub in Baker, kidding Patty at the Central Pastime Tavern in Burns, hearing stories from Heather at the Horseshoe Tavern in Prineville or just photographing the Powder Club Tavern in North Powder – which incidentally, is Under New Management or The Elkhorn Saloon in Sumpter, our visits to the Central and Eastern Oregon bars was outstanding and we would recommend it.

We told Eastern Oregon bar jokes like the one about the dog who limped into the bar and said to the bartender, “I’m looking for the guy who shot my paw…!”

The bartender who asks the horse who comes into his bar and orders a beer, “Hey, why the long face..?”

Besides the establishments mentioned above we also visited The Solstice Brewery in Prineville, The Long Branch Saloon, The HideoutTavern and 10 Depot Street Bar and Restaurant in LaGrande and The Mt. Emily Ale House in Baker City.  These are reviewed in the first three blog-posts of this road trip. 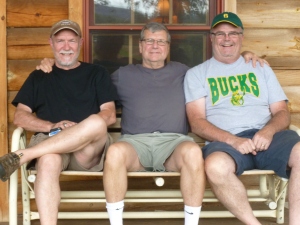 Now back to Portland where the next Beerchaser post will review the fairly new and interesting neighborhood tavern – Church.