Due to the inordinate number of establishments in Portland, the Beerchaser’s methodology since the start of the tour, has been to visit one pub or tavern from each letter of the alphabet and then repeat the routine.  There are two reasons I waived that guideline for the Buffalo Gap (the first “B” was the Brooklyn Park Pub)

(Unfortunately, there was no prior disclosure that he was going to wear his Duck sweatshirt.)

Some research confirmed the rich history of this rambling establishment, which was opened in 1974 by the Sutzmans.  It was named for their home town in Custer County, South Dakota.  Buffalo Gap, in the Black Hills, had a population of 100 when they opened their Portland bar, and the town has experienced robust growth — It was 126 in the 2010 census.  A great summary of the origin and history of the Saloon is in the blog of the former owner’s son, Sean Sutzman (“The Monday Report”) .

There are all kinds of nooks and crannies some of which house booths for patrons and others such as the one in the picture that had video poker games in a space of only about 50 square feet.  The pool room, now called The Annex,  is very large with about five tables and evidently at one time was a law office and purportedly a brothel – probably not at the same time although some might debate that issue. 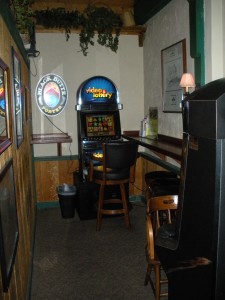 One of the Game Rooms

As we walked in, the classic Eagle tune, “Take it Easy” — originally recorded in 1972 — was playing and it is no stretch that some of the Buffalo Gap regulars were probably listening to it while drinking beer in the ’70’s.  Given the history and the great environment of this Southwest Portland institution, I can see patrons humming Katy Perry’s “The One That Got Away” in another forty years — but then again – maybe not and the Eagles great hits will still be echoing through the nooks and crannies of this establishment.

6 thoughts on “The Buffalo Gap Saloon”