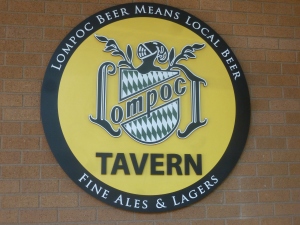 Thebeerchaser Tour of Bars,Taverns and Pubs commenced in 2011 – initially including only watering holes in Portland, but based on the positive results, the concept was expanded to include establishments in Europe, Alaska, Washington, Montana, Colorado, the Southeastern US, central and eastern Oregon and the Oregon coast.  After four years, over 150 have been visited and reviewed with about 45% of those in Portland. 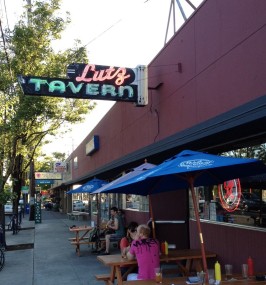 The Lutz – one of Portland’s classics

Many of the Portland venues such as the Horse Brass Pub, the Lutz Tavern and the Mock Crest Tavern have rich histories.

The bartenders in these venues tell stories about the tunnels below the downtown bars used by smugglers (Kelly’s Olympian) or the brothel and law office that concurrently shared the space (Buffalo Gap Saloon) or the ghost that purportedly still inhabits the upstairs space at the White Eagle Saloon.

Unfortunately, I never frequented the original Old Lompoc Tavern before it closed or when it was initially resurrected as the New Old Lompoc Tavern.   To remedy that, in part, I met my old friend Denny Ferguson and his colleague, Tygue Howland (both employed by another resurrected organization – the Portland State University Athletic Department) on a sunny October afternoon at the NW 23rd Street patio fronting the current Lompoc Tavern.

Fergy on the patio of the Lompoc

My friendship with Fergy goes back to 1979 when he was President of JBL & K Insurance and I worked at the Oregon State Bar.   He tried to teach me about employee benefits. Denny maintains, however, that rather than insurance concepts he tried to educate a young and naïve manager about business practices and life.

I have to admit that Dennis B. Ferguson is one of the most positive people I have ever known.   As I reported when we went Beerchasing at the Cheerful Tortoise in 2012, he is so optimistic that he will again, commence his new diet on the day before Thanksgiving – probably because he runs most of it off in the traditional Ferguson/Murphy Run at 6:15 A.M. Christmas Eve morning.  (Sign-up using the  link.)

Denny at the Cheerful Tortoise in 2012

And Tygue is Associate Athletic Director for External Operations at PSU – more about Tygue below. Our visit to the Lompac was greatly enhanced by Rosie, the Manager who also served us and has worked at the bar for the last eight years after moving from Michigan.

Rosie told us that the building structure is over 100 years old and the original Old Lompoc Tavern was opened in 1993.  In 1996, they started brewing and then in 2000, the current owner, Jerry Fechter, bought it with his silent partner – legendary beer entrepreneur, Don Younger, best known for his Horse Brass Pub – it then became the  New Old Lompoc. 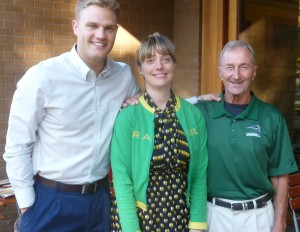 All the buildings on that block on NW 23rd were demolished and the bar closed in 2012, but then reopened in May, 2013. Based on the number of previous monikers and potential confusion, the new name was simply the Lompoc Tavern and it joins the four other Portland bars under the Lompoc Brewing umbrella – the Fifth Quadrant, the Oaks Bottom, the Hedge House and Sidebar.

For history buffs, the Lompoc name emanated from the WC Field’s film The Bank Dick with the setting in Lompoc California.

The patio in the rear of the original Lompoc, a favorite of regulars, had to be abandoned and was replaced by the tables which now extend beyond the sidewalk in front of the bar.  But as you can see, the new patio is a great setting for beer and food and when I returned after 5:00 PM, it was filled and lively. 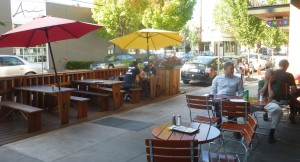 What distinguishes the Lompoc? Rosie enthusiastically stated that it was the beer – 14 on tap in addition to one cider and quality seasonals from the Lompoc Brewery in Portland.  (It’s brewed at the Fifth Quadrant.)

The Lompac space is nicely laid out with some widescreen televisions to watch games, a spacious horsehoe bar and a nook with some historical mementoes from the original bar.  A recent Yelp review summed it up nicely: 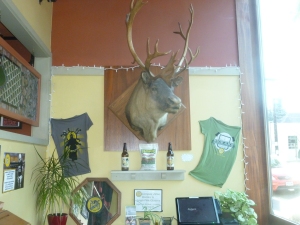 “The atmosphere is cozy and dark. There is lots of crazy *%#@ hanging on the walls. A beer paddle, trophies, used malt cans, and concert posters decorate the interior. This is a brewery but the feel is a cross between a roadhouse and a yuppified neighborhood meeting place.

It’s cool, familiar, and comfortable.  The clientele seems to be older neighborhood-dwellers, outdoorsy 30-somethings, and long-bearded regulars. This is not a quiet place to nurse a pint. This is a bustling place to swap loud stories and share the weekend’s exploits with buzzed friends around tall pints of tasty beer.” (Yelp 2/16/15 by Jacob M)

The Willamette Week newspaper office has is only a few blocks from the Lompoc and in an effort to be humorous – which Lompac Management did not appreciate –  ran a “tongue-in-cheek” piece when the bar reopened in 2013 entitled, “A Complete Catalog of Everything Wrong with New New Old Lompoc”:

“So, yeah, while the New New Old Lompoc (they call it the “Lompoc Tavern”) is pretty great, it lacks the mildewed charm of the old bar which, apropos of nothing, was the closest watering hole to Willamette Week’s office.  Here’s two of the complaints they enumerated:

It’s rainy today — It sure would have been nice if they’d opened the pub last week, when it was nice and sunny.

On a more serious note, the weekly in its 2014 Annual Bar Guide endorsed the Lompoc by stating:

“(It’s) a poor substitute for the delightfully shabby original – well aside from the food, which is better now.   And the beer is better and more adventurous……— (It’s) a neat little nook on the ground floor of a tony condo complex……..”

And since one of the joys of Beerchasing is meeting new friends, a little more about Tygue Howland.   He is smart, personable and understands athletics.  Besides his place in Washington sports lore as the only all-state high school athlete in three sports (football, basketball and baseball at Sedro Woolley High School), he knows and believes in the organization he now represents.   His job description includes fundraising, ticket sales and marketing for the Athletic Department.

All-State in baseball, football and basketball at Sedro Wooley

In fact, having just finished the book, I suggested that  inviting author, Jon Krakauer, to a book-signing to autograph his most recent book, Missoula – Rape and the Justice System in a College Town at PSU’s away game in Missoula that weekend with the University of Montana.   It could  be a creative way to generate publicity although it might not be enthusiastically received by the Montana Grizzlies or for that matter the University of Montana Administration.

Missoula – a college town with a football history and culture?

For those who have not read it, Krakauer’s  387-page non-fiction best seller is the account of the sad legacy including University of Montana football players’ involvement in a series of sexual assaults on campus, which were so numerous that it ended with an investigation and report by the US Department of Justice.   The feds criticized the University, the Missoula Police Department and the Missoula  County Attorney’s Office for their roles in tacitly permitting the perpetuation of this environment.

The University of Montana campus

Tygue and Fergy rejected the suggestion and Portland State beat the Grizzlies 59 to 41 improving their record to five wins and one loss in what has been a remarkably successful season, which now stands at 8 and 2.

Tygue has a history at PSU, having played quarterback starting in 2005 under Coach Mike Walsh. Because of a severe injury (two torn ACLs) his football career took place over six years at PSU and he also played for Coaches Jerry Granville and Nigel Burton.   Keep your eyes open for this guy who in addition to his work at PSU, had a short stint at the Oregon State Athletic Department adding to his resume. 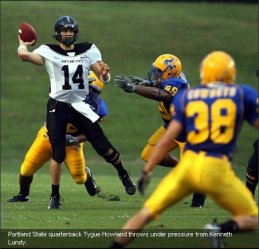 And give the Lompoc a try – The patio is a terrific place to raise a mug and watch people.   And we found the Lompoc, while understandably not a duplicate of the original, a welcome addition to some of the sterile offerings on NW 23rd.

It has a nice ambiance, diverse and ample selections of beer, reasonably priced and tasty menu selections and a friendly staff (Say hello to Rosie!!!)

The Lompoc – not the original, but a nice ambiance…

2 thoughts on “The Lompoc Tavern – A Long and Continuing Tradition”