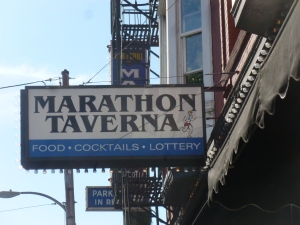 While working in downtown Portland for over thirty years, I would often promise myself that I would pay a visit to the Marathon – a bar housed in an interesting looking building on W. Burnside not too far from Providence Park (aka Civic Stadium).  I figured it was a dive bar with an eclectic group of regulars with a storied history – like some of the classic dive bars I’ve reviewed – Joe’s Cellar in NW Portland and the Ship Tavern in Multnomah Village were stellar. 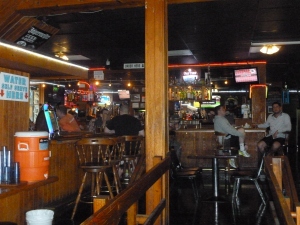 Perhaps it will keep you from reading the remainder of this post, but I was sorely disappointed by this watering hole – a pseudo sports bar with a paucity of character and little to distinguish it.

We should have instead opted for the nearby Cheerful BullPen, which has more character or Claudia’s with a rich history.

The saving grace was being accompanied by Beerchaser regular and Beerchaser-of-the Quarter Jack Faust and his son, Charlie.  Their company and conversation could make a discussion on the Rule Against Perpetuities seem interesting or make a soccer match ending in a scoreless tie, stimulating.  (I would get into trouble by suggesting more globally that such would be the case for any soccer match…..) 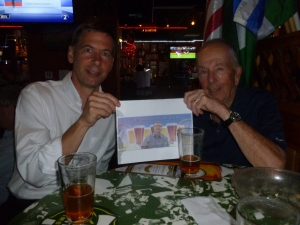 The Fausts with thebeerchaser logo

Okay, maybe that’s an exaggeration, but one or both have joined me for great trips to the Buffalo Gap Saloon, the Grand Cafe and Bailey’s TapRoom.  Jack’s daughter, Portland radio personality, Amy Faust (99.5 The Wolf), recently Beerchased with us at the Rookery (review still pending).

Upon entering the Marathon Taverna, I raised the question as to why there was an “a” at the end of the word tavern. A taverna is defined as a small Greek café or restaurant. 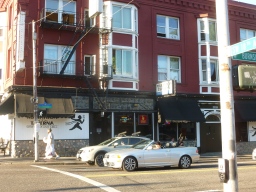 Not the character or ambiance one would expect on West Burnside

There wasn’t any moussaka or souvlaki on the menu and no retsina wine or even ouzo or Mextexa Brandy to drink.  Alas, the only things Greek in this watering hole were Faust who was a Sigma Chi at Oregon, Thebeerchaser – an SAE at Oregon State and a few gyro sandwiches.  Socrates would not be impressed with that line-up.

And what’s with the name Marathon?  The website mentions that the bar – opened in 1974, was originally located in the Acropolis Tavern – also a well known Portland strip club, but whether this heritage is accurate could not be verified.

To better understand the lure of the Marathon, Charlie Faust suggested that instead of driving, we start in Marion County in the city of Donald.  A run to Portland with a short side-trip around Forest Park – would yield a route of 26.2 miles.   We would therefore honor the Greek soldier Pheidippides – who was reported to have died in 490 BC after his run from Marathon to Athens to proclaim the Greek victory over the Persians.  Before dying, he shouted, “We have won!”

I thought this would be fitting, since these are the same words Jack uttered when he represented Bing Russell and the Portland Mavericks in the now famous arbitration with Major League Baseball in the 1970’s and chronicled in the great new documentary, “The Battered Bastards of Baseball.” 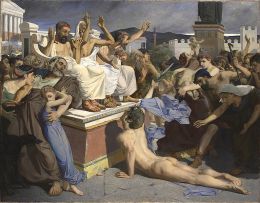 Jack Faust ordering a beer from the Marathon Bartender

Jack, however, based on his undergraduate and law school days at the University of Oregon, countered with the suggestion that we each drink 8.75 pints of beer to arrive at the 26.2 milestone.  Looking at the photos below will demonstrate that his idea could offer some synchronicity, but his son and I demurred. 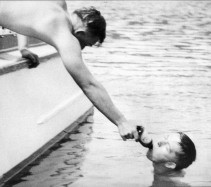 But we digress.  What was good about the Marathon Taverna?  Well, they have free popcorn – not a Greek dish, but still very good.  There are also a lot of TVs with different sporting events, if that’s what you like with your beer.  A small, but ardent group of  Portland Timber supporters was watching a match on one of the TVs –  20 high definition and a giant 92-inch monster. 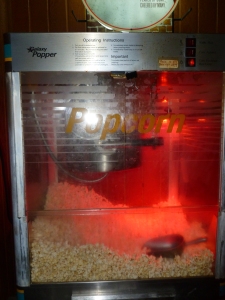 Not Mediterranean, but free.

There are nineteen reasonably-priced beers and also cocktails on their menu – but neither is listed on their website.

A number of reviews are positive about the gyros and the cheeseburgers – and their $2.00 breakfasts served until 2:00 P.M.  But the rather agressive and surly attitude of the staff was also mentioned multiple times in reviews – a downside, especially as you enter.

And this may be because of the physical layout confronting you when entering the bar – the only such arrangement I have seen in visiting over 50 bars in Portland.

There is a bouncer – a security guy, of sorts – sitting at a dias or throne-type arrangement which makes him look – and possibly act like Alexander the Great.  The “welcome” signs shout out, “No soliciting and “No Trespassing.” 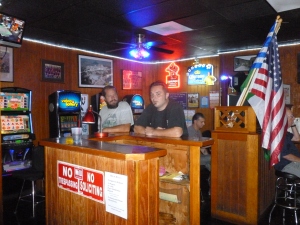 Portland Barfly sums up this issue and the overall atmosphere of the venue quite well:

“The  loyal shift of elderly patrons and the unsmiling doorman – those regulars may have been arriving every morning the past fifty years, but they’d best have their ID on hand to enter – are the only traces of The Marathon’s rather-more-dangerous past. 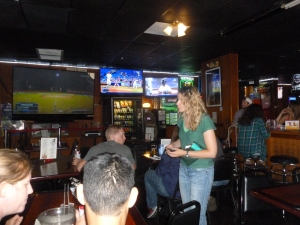 Plenty of TVs, but where are the grizzled regulars?

Weekend nights have largely been overtaken by a large, tight-knit, metal-happy, pool-playing, irritatingly-attractive group of twenty-somethings seemingly brought en masse from Beaverton for reasons beyond our imaginings.”

A sentiment echoed by this excerpt from a City Search review:   “Great place with horrible irrational staff – This used to be one of my favorite places until the last two times I’ve gone there, the bouncers have gotten extremely aggressive and kicked me out for no reason.”

Now perhaps the bar’s management feels that they need this type of defensive screening based on its Burnside location although the only altercation I could find occurred in 2008, and did not seem to be too savage.  As reported in Willamette Week:

A University of Portland grad is suing a Vancouver man for subjecting him to an uninvited bear hug outside a dive bar on West Burnside Street. In a lawsuit filed Sept. 10 in Multnomah County Circuit Court, Patrick Geraghty claims that Brian Yoakum and his friends were standing outside the Marathon Taverna on Sept. 13, 2008.

Yoakum, “without warning, clutched [Geraghty] in a ‘bear hug’ and twisted [Geraghty’s] body after securing said hold,” the lawsuit says. Geraghty suffered a broken right foot as a result, according to the lawsuit. The suit, filed by Portland lawyer Sanam Dowlatdad, seeks seeks $75,000 for medical bills and lost wages, plus $500,000 for pain and suffering.

We don’t know if this suit settled or was tried, but for those wondering, Sanam Dowlatdad, after graduating from Willamette Law School, worked as Multnomah County Deputy DA and then at the Cosgrove Vergeer Kester law firm, before establishing her own firm in 2011. 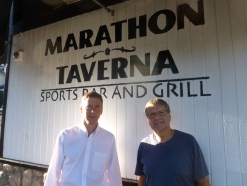 Charlie Faust and Thebeerchaser – good company but no ambiance. 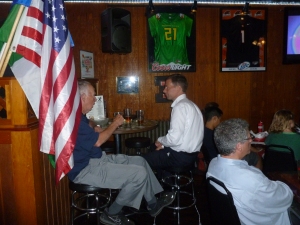 And the only other egregious conduct recorded is that of Welches area con-man named, David Wilson.  Several years ago he purportedly tried to scam those at the Marathon and nearby establishments by stating that he was desperate for a loan because he’d lost his wallet at a Timbers game and couldn’t get his car out of the parking lot.

I guess if you just want nothing more than a cheap beer and to watch a sporting event, hit the Marathon.  But unless you can get the Fausts to join you or maybe start running from a mile and one-half east of the Vista House on the Columbia River Highway – it would allow your marathon to finish at the Marathon – it may not be fulfilling.