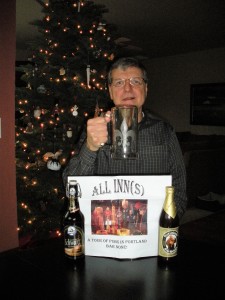 Thebeerchaser with the original logo created by Teresa Lovegren

As we commence Thebeerchaser’s Tour of Bars, Taverns and Pubs in 2017, a few tidbits or “beer-chasers.” if you will, might be fun to review.  I have already visited my first 2017 bar on January 4th – Multnomah Whiskey Library – a stark contrast to all of the dive bars visited in five years.  Stay tuned for the review in a week…..

Many of you have seen Thebeerchaser’s 2016 Annual Report, posted on December 26th.  Click on link above to read it if you want to see the 37 new watering holes visited in 2016 – 14 in Portland and 23 outside the Rose City.

There are also links which will enumerate (separately) the total of 198 bars visited since 2011 which comprise 83 in Portland and 115 in Europe, Alaska, Hawaii, several regions of the US and the coast and the desert in Oregon.

Laura Williams, Ryan Keene (now married….!) and Kenzi Larson at Stammtisch – one of the ten

Although as stated before in this blog, I have some skepticism about lists ranking bars or beers, which are usually compiled by over-worked reporters or writers with deadlines haunting them.  However, a recent ranking by Thrillist https://www.thrillist.com/ has an article on “Portland’s Best Beer Bars,” and lists ten establishments worth noting.

Thrillist is a digital media group located in New York City and founded in 2004 by two University of Pennsylvania grads.  Its website focuses on food, drink, and travel.  Based on their mission statement below, it sounds like a good place to work and does publish some good articles online.

“Thrillist means fun. We’re eaters, drinkers, travelers, and doers. We serve the curious and believe that new experiences are what drive the richest lives. We bring our passion, expertise, and taste to bear on the things that are truly worth your time and money. Life is for living, and that’s why we’re here. Today will be great.”

And the articles are pretty entertaining – and useful.  For example, “Thirty Things No One Over Thirty Should do in a Bar” https://www.thrillist.com/drink/nation/things-adults-should-never-do-in-a-bar?pinn_uid=26957832 and “Fifty Things Every Man Should do in a Bar Just Once.  https://www.thrillist.com/drink/nation/50-things-every-man-should-do-in-a-bar-at-least-once 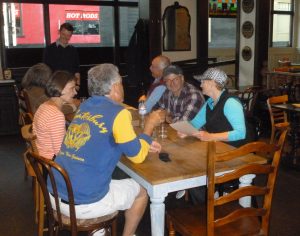 Enjoying a meal and a brew at the resurrected Produce Row

I am pleased to report that Thebeerchaser has visited and done reviews of eight or 80% of these bars during my five years of blogging  and they are all worth a visit.

l’ll plan to add the two not reviewed (LaMoule and Loyal Legion) , in 2017, and offer these comments on the others.

While Bailey’s Tap Room probably has the most extensive tap list, the bar on SW Broadway is pretty sterile and doesn’t serve food.   The Upper Lip, an ancillary facility upstairs, has much better atmosphere although when exiting on Ankeny Street, you should stop at The Tugboat Brewery, which is a great little place to have a good beer, some conversation and food. (click for the Beerchaser review)

Beer Mongers has about 600 beers available, but it’s primarily a bottle shop rather than a bar per se’.  No food is available although it can be brought in from adjacent sources, which was the case when former Portland Mayor, Sam Adams, and I visited and the owner of Portobello ( a vegan trattoria) who was a fan of Sam’s, gave us a complimentary arugula pesto pizza with toasted walnuts and smoked Portobello mushrooms. (It was wonderful!) 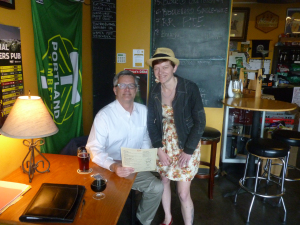 Sam Adams and the owner of Portobello

Drinking from “The Boot” at Prost.

And Prost, Saraveza and the Horse Brass Pub may not have as many beer options, but much better ambiance and good food as well.   It begs the question I asked when I reviewed Bailey’s, “How many beers on tap do you need if there are a dozen good micro-brews and PBR….?”

My new son-in-law (as of September 17, 2016), Ryan Keene had the foresight and good taste to introduce me to a great new beer from what any Oregon State University grad would consider a good brewery to wit:  Belching Beaver in Vista, California, a new brewery as of last summer.  And their Hop Highway 78 IPA was very good with a nice taste of citrus and grapefruit in the background.

Ryan admiring the taste and smoothness of Belching Beaver IPA

Some are impressed with their flagship beer as reported in a 1/7/17 article in the San Diego Reader entitled “Portland is a tough Beer Market.” sent to me by friend and former Portlander, Molly Larson Cook – also known as the “Jazz Cookie.” (check out her great blog  https://jazzycookie.wordpress.com/2017/01/

“Everybody’s obsessed with Peanut Butter Milk Stout,” one of Belching Beaver’s flagship beers.”  (This is one Thebeerchaser will forego!)

Those who follow news of breweries will have followed the tortured path of the proposed merger between Anheuser Busch in Bev and SAB Miller over the last year.   One that has a $100 billion price tag and that has seen multiple on-again/off-again stages before shareholders of both overwhelmingly approved the acquisition.

One wag suggested the negotiators from both sides should have followed the path of countless dive bar encounters and started drinking at the commencement of negotiations.    After each additional round, “the potential partner looks considerably better and flaws magically disappear…..”

A groundbreaking – and probably costly – Ohio State University study “Beauty is in the Eye of the Beerholder” (and winner of a 2013 IgNobel Prize) may also be relevant when they concluded:

According to a September 29th article in the Wall Street Journal, the new organization will have about “46% of global beer profits and 27% of global volume.”

Part of the underlying rationale for the transaction is an effort to revive the struggling Budweiser market, not only in the US, but in Brazil – the second largest Bud market.   Another article researched by Thebeerchaser states that, “…..nearly 44% of 21-to-27 year drinkers in 2016, have never tried Budweiser, although the main inroad to the traditional Bud market has been Bud Light.”

So next time you’re tempted to grab that micro-brew, remember the plight of the corporate behemoth and remember, “That Bud, That’s Beer.”  (I have to admit before retiring at Schwabe, when we would have a beer at the bar on the ground floor of the PacWest Center after work, my younger colleagues, who all ordered micro-brews, would tell the bartender to pour my Budweiser into a glass so I would not embarrass them!) 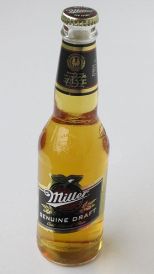 Finally, those who have qualms about the colonial history of some of the world’s powers, will be shaking their heads after learning that SAB-Miller will be establishing operations in Africa:

“Africa, one of the last remaining growth markets for the beer industry, will become 9% of revenue and a major focus of the company.”

Humor in the Legal System

Having worked in a large law firm for twenty-five years and previously at the Oregon State Bar for another seven, I have always appreciated the humor of lawyers and the interesting, if not bizarre, cases that arise as they represent clients. 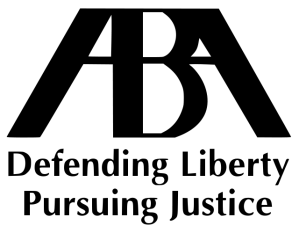 One good source is the American Bar Association Law Journal, which I still receive on-line weekly for entertainment value.  Look at some of the cases that have been highlighted in past years.  Of course, sometimes the comments by the lawyer readers are almost as good as the stories themselves.

“Is it illegal to implant a remote-control device in a cockroach?  PETA asks Attorney General to nix RoboRoach kit.”  11/6/2013

“Judge (says) Pro se lawyer (persons who represent themselves in court without separate legal counsel) guilty of soliciting murder, would win if he could sue himself for malpractice.” 4/1/16

And after reading a 12/29/16 story in The Oregonian entitled, “Man in Wheelchair gets DUII Thrown Out,” I am confident this story from Lincoln City, Oregon will make the cut in the future.  After a jury found him guilty in a 2013 trial, the Oregon Court of Appeals recently determined that appellant was a pedestrian and did not fit the definition of a vehicle. 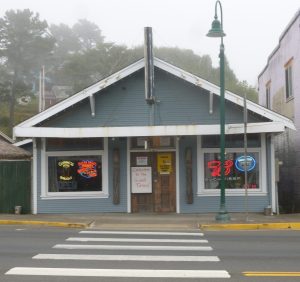 The Old O with crosswalk in front in Lincoln City

Since some of my favorite dive bars are in Lincoln City, it makes me wonder whether this incident occurred in the crosswalk right outside the Old Oregon Tavern, the Nauti Mermaid or the Cruise Inn.  (see https://thebeerchaser.com/2014/09/23/thebeerchaser-does-the-central-oregon-coast-part-i/)

The defendant was in a crosswalk at the time and “drove” into a moving pick-up truck.   There is no Oregon case law on the same fact situation where the wheelchair is on a public road or parking lot.

“The reversal will undo the conviction on Greene’s record and the $1,500 fine he was ordered to pay. But the reversal won’t undo other parts of his sentence — including the three years his driver’s license was suspended, because more than three years have already passed since his conviction.” 12/29/16 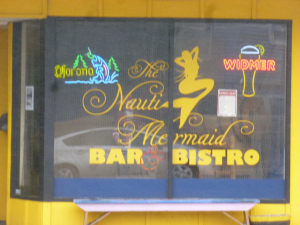 In a recent post, I told you the story of the latest Beerchaser-of-the-Quarter – journalist, broadcaster and author, Dwight (The Godfather) Jaynes, who was inducted into the Oregon Sports Hall of Fame in 2010. https://thebeerchaser.com/tag/dwight-jaynes-posting-up/

I was pleased to see that two other friends are also members of the five inducted in the 2016 class.  Greg Strobel, is an SAE fraternity brother at Oregon State and part of the elite group of wrestlers in the SAE House while I was there – Len Kaufman, Jess Lewis, Ron Iwasaki, Jim Blackford, Steve Woods, Loren (Bear Pit) Johnson and others.

Strobel was a three-time college All-American and an NCAA 190-pound national champion twice.  He became the head wrestling coach at Lehigh University and was also inducted into the National Wrestling Hall of Fame in 2012 and the Oregon State Sports Hall of Fame in 1993. 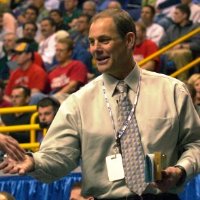 Brad Smith played basketball at Oregon City High School one year after I graduated and I have had the pleasure of scrimmaging with him in alumni games.  He is the legendary coach that revolutionized girls basketball and built Oregon City into a dynasty – ten state championships during his 27-years as coach at Oregon City:

Brad was inducted into the Women’s Basketball Hall of Fame in 2015 and his other honors are too numerous to list.  Although he retired from coaching in 2006, his basketball camps and tournaments are still extremely popular.

The coach at camp at OCHS in August

I toured the Oregon City High School campus in August in preparation for my 50-year class reunion this fall and Principal Tom Lovell, took me into the gym where Brad was in the midst of one of his semi-daily sessions, where this picture was taken.  We chatted and I kiddingly asked him if his first-step to the bucket was still as quick as in the ’60’s he was a very good point guard at OCHS.

Both Greg and Brad, besides making immense contributions to Oregon and national athletics, are great human beings.

Former Beerchaser-of-the-Quarter, noted author and editor of the University of Portland’s award-winning magazine, Brian Doyle, had brain surgery last month and is now recovering at home.

Brian Doyle beerchasing at his favorite bar – the Fulton Pub

Brian has been on several Beerchasing events and is a wonderful family man with a great sense of humor, unbridled creativity and a strong faith.

There is a Go-Fund-Me site which is raising funds for medical expenses and since Brian may not be able to return to work.  Our prayers are with Brian, his wife, Mary and his two children.  You can see a narrative of his recovery to this point on the Caring Bridge website.