The history of beer is as robust as an imperial stout and has religious roots.  These generally date back to the sixth century when the monks at the Benedictine Brewery in Monte Cassino started brewing beer in the monastery founded by Benedict of Nursia.  Saint Benedict is also the originator of the Rule of St. Benedict. 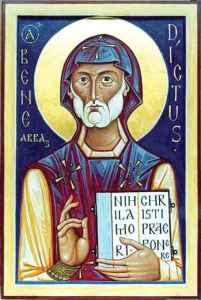 As stated in a Jesuit Press article entitled  How Monks Revolutionized Beer and Evangelization,:

“If you love beer, thank a monk.  Monks have been producing beer for 1,500 years, and in that time, they have revolutionized and perfected the beer making process.” 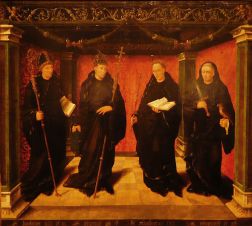 The Benedictine saints Bonifatius, Gregorius the Great, Adelbertus of Egmond and priest Jeroen van Noordwijk (Circa 1529-30)

Well, after more than five years of planning, constructing, training and testing,  Oregonians now have an opportunity to reap the fruits of that legacy in their own backyard.

The Benedictine Brewery is now brewing on site across from the hop fields on Mount Angel Abbey property in the City of Mt. Angel . 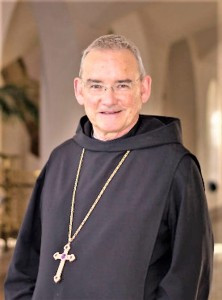 The Brewery and the St. Michael Taproom were blessed by Abbot Jeremy Driscoll, OSB, in an inspirational ceremony on the afternoon of August 8th attended by monks, priests, seminarians, Abbey Hilltop employees and special guests. 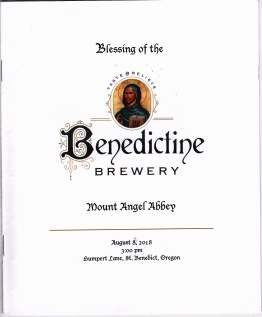 The ceremony commenced with Fr. Martin Grassel, OSB, who will be the General Manager of the Brewery and whose vision was the motivating force stated:

“Father Abbot, we ask a blessing on this building constructed for brewing beer, so we may live by the work of our hands bringing forth from nature and art, a drink we pray, will gladden hearts, bring friends together and lend them to the thankful praise of God.” 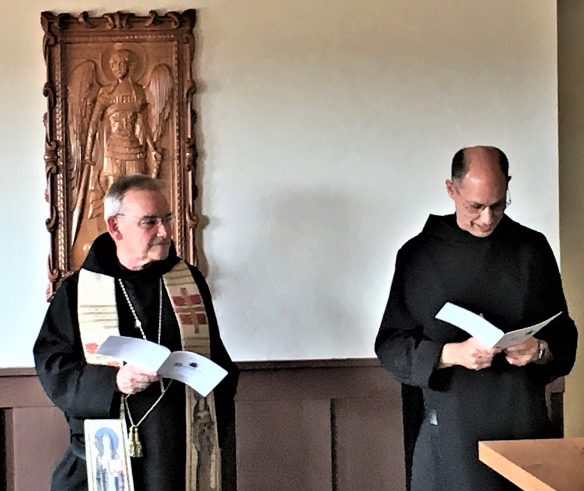 Abbot Jeremy and Fr. Martin at the Blessing Ceremony 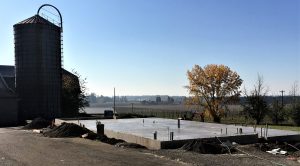 Although planning for the Brewery commenced over five years ago and the monks have been brewing on a contract basis with Seven Brides Brewing of Silverton, the primary construction phase was marked by an old-fashioned barn or timber-raising last November. On that cloudy day, over one-hundred monks, seminarians and members of the Mt. Angel community gathered in the early morning. 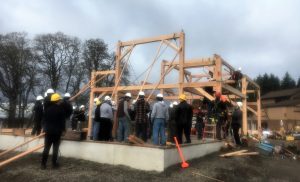 What began the day as a foundation and concrete pad ended up as a structural fame with six bents (two-dimensional transverse rigid frames and the building blocks that define the overall shape of a structure) using 14,000 board feet of Douglas Fir timber harvested from the Abbey tree farm. 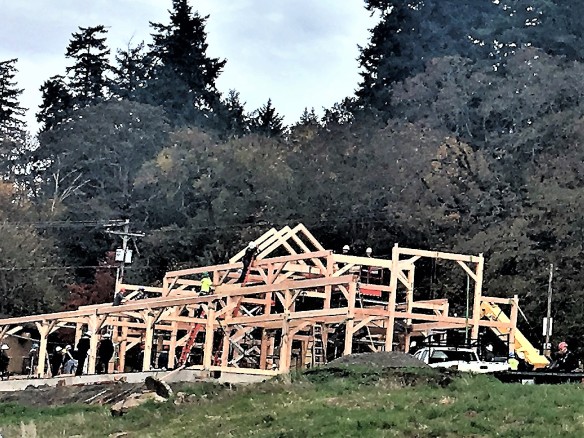 To see pictures, video and read about that event see Thebeerchaser post:

The following video is one example of those shown in the aforementioned post.

The first prayer ceremony in the brewery.

Fr. Vincent Trujillo, OSB, led the service – which was “uplifting”– very consistent with the theme that day! The monks sang and were joined by the other participants. 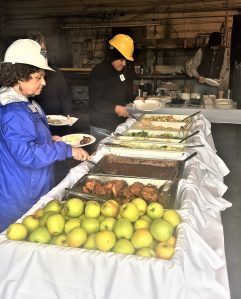 We were rejuvenated by a delicious spread of barbecued chicken, baked beans, potato salad, fruit and green salad.  Missing from the traditional feast of historic barn raising in Amish and Mennonite communities was the standard main course – pig stomach!

What a wonderful collaborative effort that day.

Who Should Come to the Brewery and Taproom and Why?

With over 260 breweries in Oregon, most with taprooms, why should you visit the Benedictine?  That question is answered more thoroughly below, but one reason is that it is one of only three in the US in which monks are the owners and operators of the brewery. You have to travel to the wild Chama Canyon near Abiquiu, New Mexico for the closest to Mount Angel Abbey – that of Christ in the Desert Monastery. 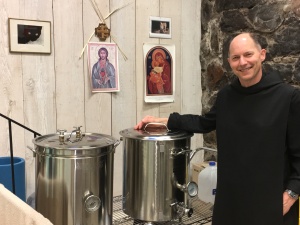 Fr. Martin as General Manager and Fr. Jacob Stronach, the Head Brewer will be guiding other monks who will assist in the brewing, bottling and maintenance of the equipment.  The beer will use locally sourced hops grown on Abbey land and water from the monks’ well. 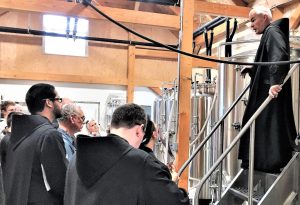 Fr. Jacob briefing his colleagues on the brewing process

Fr. Martin is a University of North Dakota graduate in Computer Science who started his career in Phoenix as a software engineer for Honeywell Corporation before he got the call and made the trip to Mount Angel for seminary in 1995.

“Once I stepped across the threshold at Mount Angel, I knew I was home,”   His fascinating story can be viewed at

The brewery and taproom are in rural setting at the lower edge of the Abbey grounds and across from the hop fields.  A friend who is a noted NW architect and saw pictures of the taproom interior (not quite finished) and external shell responded with the following comment: 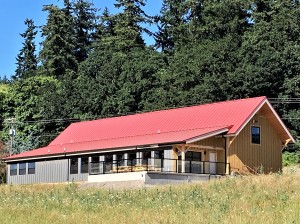 “The building looks splendid – adhering to the Benedictine principle of elegance through simplicity.  What a splendid project with which to be engaged – one in which rewards will precede heaven.” 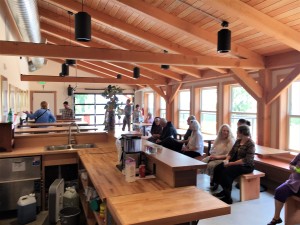 Taproom as it nears completion

The interior of the taproom has a great Northwest ambiance – attractive wooden beams, community tables and benches.  There is a patio on the south end with picnic tables looking over the hop fields with the imposing steeple of St. Mary’s Catholic Church in downtown Mt. Angel in the background. 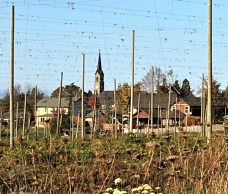 And only a mile away, the Abbey Hilltop, overlooking Marion County farmland has an inspiring campus with the splendid chapel as the focus, 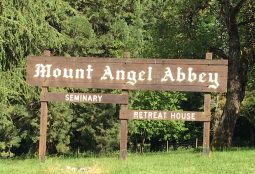 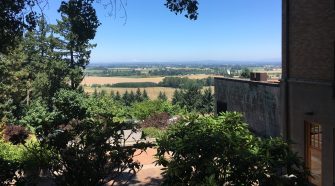 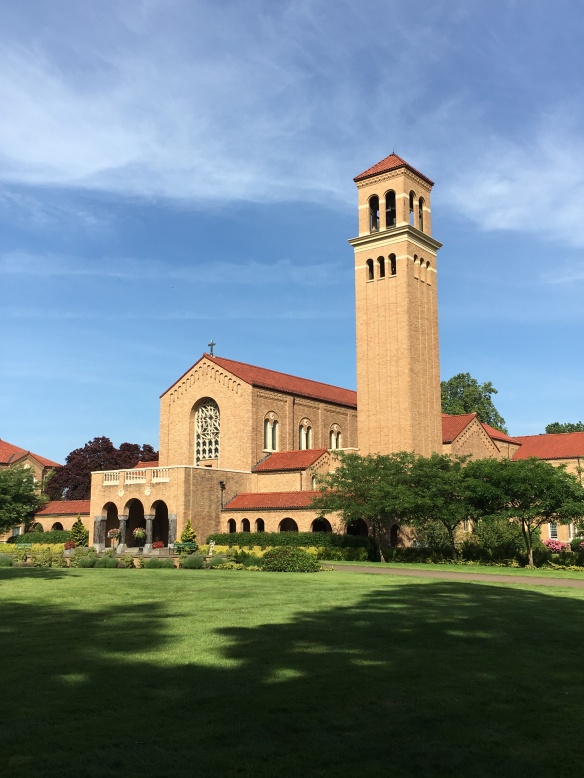 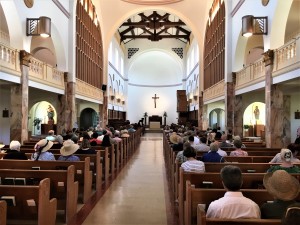 Besides the Chapel, there is a bookstore, museum which integrates art with natural history, a retreat center (guest house), seminary classrooms and dorms and a noted library:

“Housed in a world-renowned building …..the Mount Angel Abbey Library provides …. access to a large collection of books and other library material in a wide range of subjects including medieval manuscripts and rare materials from the Civil War.” (Abbey web site) 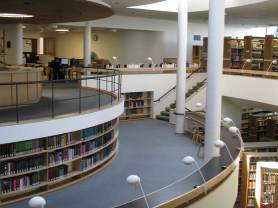 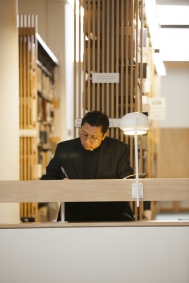 “It is one of only two buildings in the United States (the other is at MIT) designed by Alvar Aalto – one of the early giants of modern architecture. Completed in 1970, the library received the 2014 World Monuments Fund Award. Recently, Oregon architects voted it the second most iconic building in the state, after Timberline Lodge at Mt. Hood.”  (Mount Angel Letter – Summer 2018)

You and your family (including children) will find when you visit both the St. Michael Taproom and the Hilltop, that the Abbey Community including monks, seminarians and employees are a diverse, interesting and hospitable group.   And the people in the City of Mt. Angel are enthusiastic about this project and we expect them to be regular visitors to the taproom.

The Glockenspiel Restaurant will provide the food at the taproom ranging from chili, to pretzels to fondue and cheeses. As Fr. Martin said, “With Oktoberfest and a German heritage, this is a beer-loving town.”  (The St. Michael Taproom will be open to the public during Mt. Angel Oktoberfest, September 13 to 16, for tastings and tours and the Grand Opening will be September 22-3.) 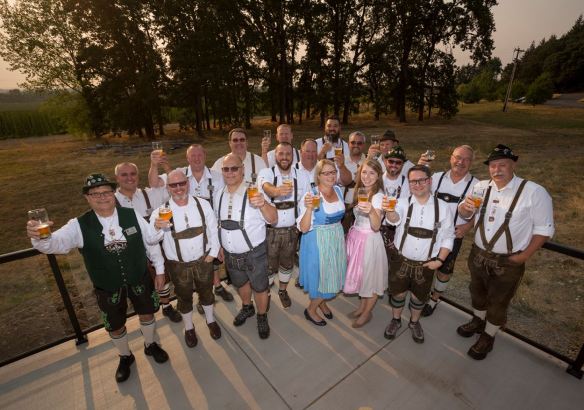 The Mt. Angel Octoberfest Board at a Taproom preview event on the patio. 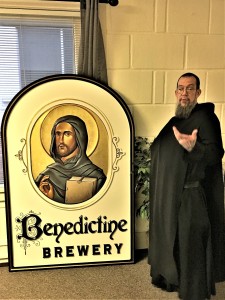 The monks have come to the Monastery from all over the world with amazing backgrounds.   We already talked about Fr. Martin, but meet Br. Andre Love who is standing by the sign that he made which will hang on the outside of the brewery.

He is the Curator of the Abbey Museum, an artist who once owned a tattoo parlor and a talented designer who was a key figure in designing the Taproom.

Or you might raise a mug with Br. Bede Ramos who hails from the Philippines and  had a background in international human resources before he came to the Seminary. 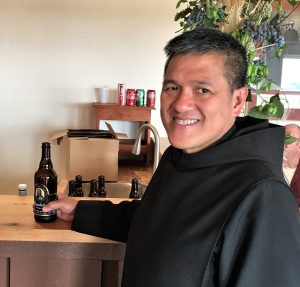 Br. Bede with a bottle of Black Habit

And if you want to hear a marvelous southern drawl, just order a mug from the new Taproom Manager, Jennie Baxley, a Texas native who just drove across the country in her move from North Carolina to launch St. Michael.

She has a background in education and the hospitality industry and is shown in the picture below with Fr. Liem who is originally from Viet Nam – a monk for twenty-nine years. 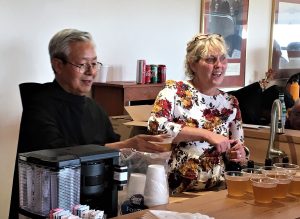 Initially, the number of beers will be limited to a certain extent as the Brewery ramps up production.  Taps will feature Belgian beers with NW hops including Black Habit – a smooth dark beer which has received an enthusiastic reception fom the brewing community and beer lovers. 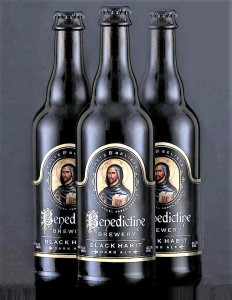 In addition, St. Benedict Farmhouse Ale and Haustus Pale Ale and Fr. Martin’s Helles Lager are some of the beers in the tap list still under development.  Cider (both alcoholic and non-alcoholic) and wine and root beer from Mount Angel will also be served.

The beer will be crafted in the brewing tradition that recognizes Saint Arnold of Metz, a Benedictine Monk who is known as the “Patron Saint of Brewers.”

“In medieval times, beer was an essential, as many places did not have access to clean drinking water. Arnold gladly brewed the beer for the local peasants and encouraged them to drink it instead of water” 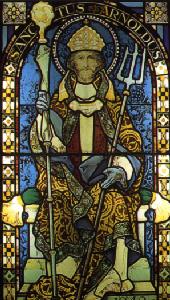 He once said, “From man’s sweat and God’s love, beer came into the world.”

This factor is worth restating as it will differentiate the Benedictine Brewery from others and also begs the question:

Is this a taproom where one has to be Catholic or have a religious bent to enjoy it and feel welcome.   Let’s look at the Brewery Guiding Principles authored by Fr. Martin:

So how is that “blessing” imparted?  Fr. Martin goes on to state it is the feeling one will encounter there and leave with as exemplified: 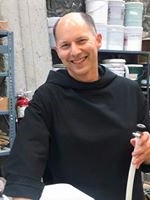 “By the greeting you receive.  The respect people are shown, the simplicity and the values encountered.  The presence of monks, priests and seminarians.  The peace of the Hilltop.

The contemplative view of the hop fields.  The blessing of the taproom when it opens daily.  Having your personal items blessed if you make that request.”

You might even meet Abbey Jeremy, shown in the picture below toasting with Br. Anselm, from Bakersfield, California, who is one of four novices who one year ago made their simple vows (stability, conversion of life and obedience – essentially becoming junior monks). 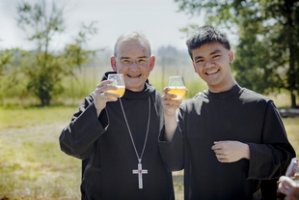 And consider having Abbot Jeremy autograph one of the books he has written including The Monks Alphabet  – my absolute favorite and a wonderful read.

It’s a series of short essays with the Abbot’s own reflections on topics ranging from serious theology including his years spent teaching in Rome, to thoughts on literature to keenly observed moments in nature, to his unique experiences as a youngster.

The latter includes his adventures when he was nineteen – he and three friends had jobs as cowboys in New Mexico.  Fortunately, by then he had learned some lessons in life including how to avoid accidents:  “When I was five-years old, my brother and I burned our garage down.  It was a big accident.” 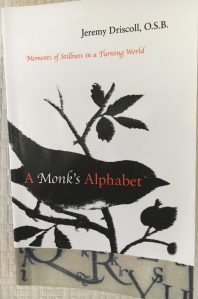 So this fall, if you are taking a trip to nearby Silver Falls State Park, the Oregon Garden or just want to have an interesting and peaceful afternoon on the Abbey Hilltop, “tap” off your trip with a tour of the Benedictine Brewery and have a glass of Black Habit or one of the other Benedictine Beers.

Whether you meet Taproom Manager, Jennie Baxley, Fr. Martin, a resident of the Mt. Angel community, Br. Bede or someone who has traveled from Sacramento to see the wonders of Oregon, you will enjoy the fellowship and the beer.

(The video below is the Hilltop on the day of the St. Benedict Festival in July)

5 thoughts on “Taste and Believe!”